The U.S. Supreme Court is expected to rule Wednesday on whether the death penalty should be reinstated for Dzhokhar Tsarnaev, one of the men who carried out the Boston Marathon Bombing.

In August 2020, a three-judge panel of the U.S. Court of Appeals for the First Circuit tossed now 28-year-old Tsarnaev’s death sentence issued in district court, saying the trial judge who handled the the case did not properly screen for jury biases. Under the Trump administration, the Department of Justice asked the Supreme Court in October 2020 to hear the case and reinstate his death penalty.

Despite a transition of power to President Joe Biden before the Court could hear the case, the Biden administration decided to press on, challenging his reputation as the first sitting U.S. president to oppose capital punishment.

A Brief History of the Tsarnaev Brothers

On April 15, 2013, Dzhokhar Tsarnaev, who was 19 at the time, and his brother Tamerlan Tsarnaev planted two pressure cooker bombs near the finish line of the annual Boston Marathon in Boston, Massachusetts. The Islamic terrorist attack caused the deaths of 8-year-old Martin Richard, 29-year-old Krystle Campbell, 23-year-old Lingzi Lu, and left more than 280 people injured.

The Tsarnaev brothers also killed 27-year-old MIT Officer Sean Collier during a high publicized mass search for them after the bombing. Tamerlan, 26, was ultimately killed in a shootout with police.

The Tsarnaev brothers first arrived in the United States in April 2002 at 15 years old and eight years old with their family on six-month tourist visas from Kyrgyzstan. Within a year of arriving in the U.S., the Tsarnaevs applied for asylum to remain in the country.

After having been granted asylum, the Tsarnaevs applied for lawful permanent residence, otherwise known as green cards. In 2007, Dzhokhar Tsarnaev was given a green card while his brother, Tamerlan, did not secure a green card. 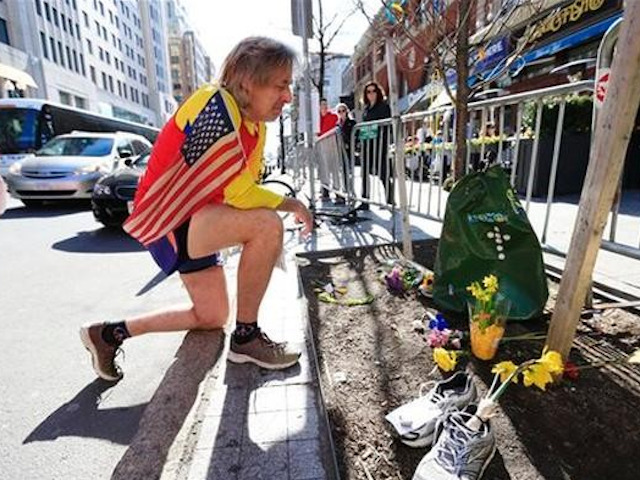 Ron McCracken of Dallas pays his respects at a makeshift memorial honoring to the victims of the 2013 Boston Marathon bombings ahead of Monday’s 118th Boston Marathon, Sunday, April 20, 2014, in Boston. (AP Photo/Matt Rourke)

Then, on September 11, 2012 — which is also the anniversary of the 9/11 Terror Attacks — Dzhokhar Tsarnaev was able to become a naturalized American citizen just eight months before he and his brother carried out the Boston bombings.

Fast forward to 2019, when a heavily redacted federal affidavit was unsealed during Tsarnaev’s appeal of his death sentence, revealing details of 2011 murders allegedly involving his brother Tamerlan and his friend Ibragim Todashev.

Todashev, who was reportedly shot multiple times by the FBI during a 2013 interview, confessed that he and Tamerlan participated in the 2011 “Waltham murders” and both men “took several thousand dollars from the residence and split the money,” according to the Boston Herald.

On September 11, 2011, the 10-year anniversary of the 9/11 Terror Attacks, the men allegedly bound, beat, and slit the throats of Raphael Teken, 37, Erik Weissman, 31, and Brendan Mess, 25. They also reportedly left the men covered in marijuana and attempted to scrub the crime scene of finger prints.

The lower courts ultimately excluded evidence related to the Waltham murders, which are still considered unsolved, while deciding if Tsarnaev should receive the death penalty.

On Wednesday, lawyers for the United States and for Tsarnaev will mainly argue over two points: whether the jury in district court was properly vetted for biases, and whether the court’s exclusion of new evidence regarding Tamerlan’s alleged role in the 2011 Waltham murders was fair considering the life-or-death stakes of Tsarnaev’s case.

Tsarnaev’s lawyers are arguing that the district court violated the U.S. Constitution’s Eighth Amendment and the Federal Death Penalty Act (FDPA) by excluding “reliable evidence” that “went to the heart of Dzhokhar’s mitigation case.” According to a respondent brief, Tsarnaev’s lawyers are arguing that the Waltham murders show how Tsarnaev’s older brother had a propensity for violence and ultimately ended up playing a role in radicalizing Tsarnaev and manipulating him into participating in the Boston bombings. They also allege Tamerlan was the main planner of the attack.

“But with the evidence excluded, the government was able to paint a deeply misleading picture that Tamerlan was merely “bossy,” and even to assert that Tamerlan was unable to commit violence until Dzhokhar joined him,” according to the brief. “By exploiting the evidence’s exclusion in this way, the government left jurors with a distorted understanding of Dzhokhar’s background, character, and role in the offense.”

Furthermore, the brief alleges that the district court “refused to ask prospective jurors what they remembered hearing about the case.”

“Prospective jurors were bombarded with inflammatory, inadmissible material, including victims’ calls for the death penalty and inflammatory arguments for death that the court forbade the government from asserting at trial,” Tsarnaev’s lawyers argue. “Jurors who saw such material could have been deeply prejudiced by it. Yet the court refused to ask content questions, improperly deferring to jurors’ untested assertions of impartiality.”

In contrast, the U.S. solicitor general is arguing that the court of appeals improperly vacated the capital sentence recommended by the jury in “one of the most important terrorism prosecutions in our Nation’s history.” 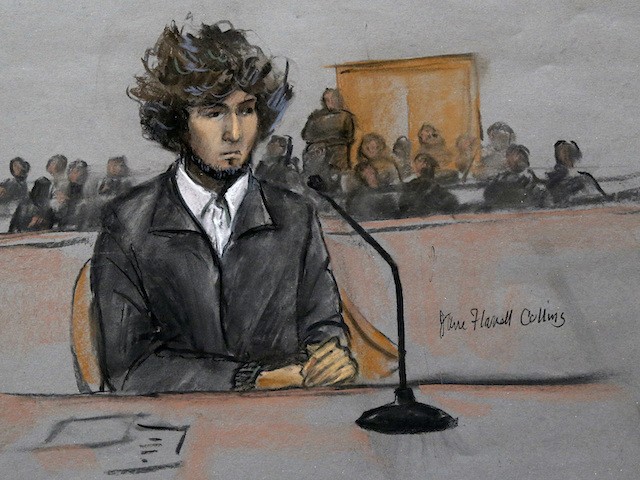 In this Thursday, Dec. 18, 2014 courtroom sketch, Boston Marathon bombing suspect Dzhokhar Tsarnaev sits in federal court in Boston for a final hearing before his trial begins in January. (Jane Flavell Collins via AP)

“This Court should reverse the decision below and put this case back on track toward a just conclusion,” the brief for the United States proposes.

The United States is arguing that pretrial publicity does not, as a rule, hinder a jury from being impartial and that the court engaged in a jury selection process which the Supreme Court has upheld in other notable cases.

“The decision below also disregarded the practical realities of a jury pool unlikely to have comprehensive recall of specific news items, a defendant who conceded the facts to which the media coverage primarily related, and a deliberative jury that ultimately rejected the death penalty for many of respondent’s capital crimes,” according to the brief.

As for exclusion of evidence pertaining to the unsolved Waltham murders, the U.S. wages the murders are an entirely different crime with seemingly different motives, and both parties reportedly involved are dead. To have battled over the details of the separate crimes in court “was exceedingly unlikely to be productive” when discussing Tsarnaev’s role in the Boston bombings, the briefing argues.

“And even if Todashev’s story were believable in all of its particulars, it showed at most that Tamerlan had committed murder on the spur of the moment and allowed Todashev to opt out—not that Tamerlan intimidated respondent into researching, building, and using homemade shrapnel bombs to kill innocent people at the Boston Marathon,” the federal government argues.

In contrast to the picture painted by the respondent brief, the United States claims Tsarnaev was “eager to commit his crimes,” was “untroubled” by ending several lives and injuries hundreds of other people, and “remained proud of his actions.”

“The jury that watched a video of respondent place and detonate a shrapnel bomb just behind a group of children would not have changed its sentencing recommendation based on Tamerlan’s supposed involvement in unrelated crimes two years earlier,” court documents state. “The court of appeals lacked any sound basis for concluding otherwise and undoing the work of the jurors to whom the issue of capital punishment was properly entrusted.”