The “fact-checking” outlet Politifact is defending its August 2020 claim that Kyle Rittenhouse’s possession of an AR-15 was not “perfectly legal,” even though the gun charge against Rittenhouse was dismissed by Judge Bruce Schroeder.

On August 28, 2020 – just three days after Rittenhouse had used the rifle on the streets of Kenosha – Politifact Wisconsin tweeted, “A Facebook post says, ‘At 17 years old Kyle (Rittenhouse) was perfectly legal to be able to possess that rifle without parental supervision.’ That’s False.”

The tweet linked to a PolitiFact article, which said:

In an Aug. 27 post, one Facebook user said it was “perfectly legal” for Kyle Rittenhouse — who was arrested in Antioch, Ill., after fleeing Wisconsin — to brandish an assault-style rifle on the streets of Kenosha.

“Carrying a rifle across state lines is perfectly legal,” the poster said. “Based on the laws I can find of this area at 17 years old Kyle was perfectly legal to be able to possess that rifle without parental supervision.”

The PolitiFact article zeroed in on the phrase “perfectly legal” and opined, “Is that true? State law suggests not.”

Whether Rittenhouse violated Wisconsin law by possessing a firearm underage is the subject of ongoing litigation. But the Facebook post claimed that it was “perfectly legal” for the teenager to carry an assault-style rifle in Kenosha.

At best, that’s unproven. At worst, it’s inaccurate. Either way, we rate the post False.

On November 15, 2021, Breitbart News noted that Judge Bruce Schroeder dismissed the firearms charge against Rittenhouse, siding with the Defense’s claim that the law is only applicable if Rittenhouse carried a Short Barrel Rifle (SBR). 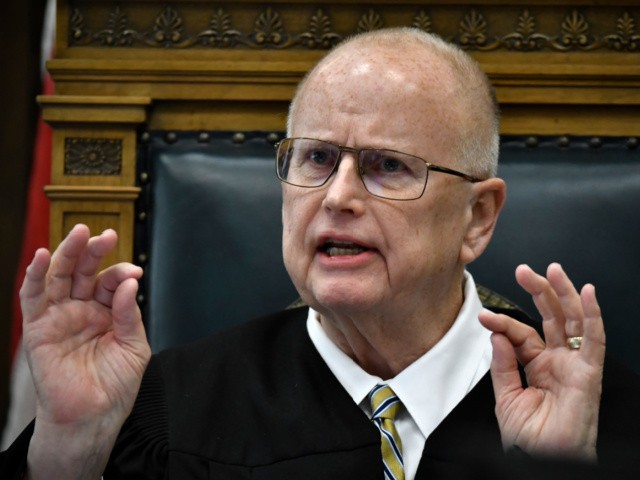 Judge Bruce Schroeder reprimands Assistant District Attorney Thomas Binger in his conduct in the line of questioning while cross-examining Kyle Rittenhouse during the Kyle Rittenhouse trial at the Kenosha County Courthouse on November 10, 2021, in Kenosha, Wisconsin. (Sean Krajacic-Pool/Getty Images)

The prosecution admitted that Rittenhouse was not carrying an SBR.

Despite the dismissal, PolitiFact is standing by its claim that it is “false” to say Rittenhouse’s possession was “perfectly legal.”

The day after Schroeder dismissed the gun charge PolitiFact added an editor’s note to its piece. The note pointed to Associated Press reporting, Wisconsin lawmakers’ intentions, and claims that PolitiFact knew all along that there was a possible exception for rifles.

The editor’s note ended by saying, “These subsequent events show the grey areas of local gun laws — hardly a case of something being ‘perfectly legal.’ Our fact-check remains unchanged.”