As Democrats continue to sail off an extremist cliff and a Red Wave builds towards 2022, three U.S. Senate races once considered fairly safe for Democrats have been moved into the toss-up column.

Currently, the U.S. Senate is in control of Democrats and split evenly 50-50. The GOP need only gain one seat next year to seize control of the chamber.

Everything points to a GOP blowout next year, maybe even what might be remembered as a political realignment. As we saw in Virginia and New Jersey in the aftermath of this month’s off-year elections, two blue states moved by double digits away from Democrats and towards Republicans. This means that normal people appear to be finally waking up to the Democrat party’s increasing extremism: the transsexual voodoo, the gay porn in classrooms, the evil that is Critical Race Theory, the fascist virus policies, not to mention His Fraudulency Joe Biden’s ongoing failures—everything from the border to Afghanistan to record inflation.

As I write this, Democrats in the House just passed another mammoth spending bill, one that gives hundreds of billions of dollars in tax cuts to the wealthiest people in the country and encourages even more illegal immigration. The bill is unpopular with the public. Worse still, this will be Biden’s third trillion-dollar-plus spending bill, so if it passes the U.S. Senate, we are looking at an even more overheated economy, which means even worse labor shortages and higher inflation. 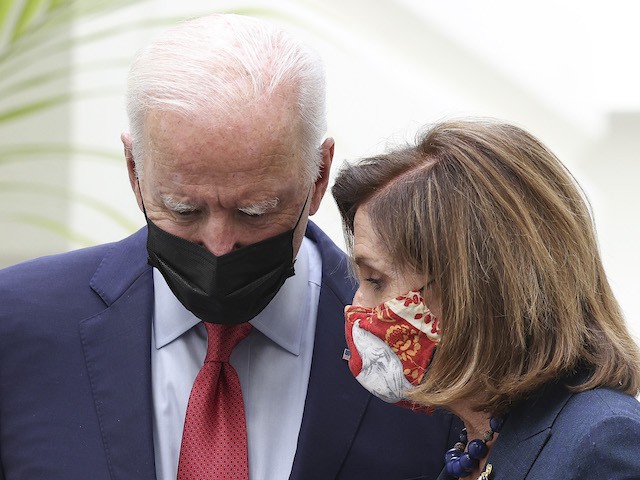 President Joe Biden talks to Speaker of the House Nancy Pelosi (D-CA) as they leave a House Democratic caucus meeting at the U.S. Capitol on October 01, 2021, in Washington, DC. (Kevin Dietsch/Getty Images)

Currently, in the RealClearPolitics poll of polls, Biden’s job approval rating is upside-down at 41.3 percent approve and 53.4 percent disapprove.

On the generic congressional ballot, Republicans are up 4.2 points over Democrats, which is better than the GOP polled in 1994, 2010, and 2004—years that saw mammoth Red Waves alter the political landscape, not only at the national level, but at the state and local levels.

The Democrat party is in serious trouble, and the corporate media has been so weakened by five years of serial lying, it’s very hard to see a scenario where this turns around. The American people now see the Democrats for the extremist freaks they are. And as we saw in Virginia, and almost saw in New Jersey, the American people see through all the media’s racist/sexy/crazy tricks.