Florida Gov. Ron DeSantis on Monday announced he is pitching significant pay increases to support the men and women of law enforcement in the next budget.

“As most of you remember, you go back last year, the summer of 2020, you had huge movements in different parts of the country, municipalities, even state levels, to attack law enforcement, to defund law enforcement,” DeSantis said during a press conference in Orlando, Florida, speaking behind a podium reading, “Florida Supports Law Enforcement.”

“And many municipalities did take a huge chunk out of their law enforcement budgets,” he continued, noting they are not trying to figure out how to get it back in due to skyrocketing crime.

“It’s truly been one of the most disastrous policies that anyone’s ever tried to implement — this whole defund law enforcement. And you see the effects of this every single day in jurisdictions” that introduce policies that are soft on crime, he continued.

DeSantis said he is proud that Florida “never budged an inch” and stood with law enforcement as others walked away, going the extra mile and including thousand-dollar bonuses for every sworn law enforcement officer, first responder, and EMT in the current budget. He wants to carry that on to the next budget as well. 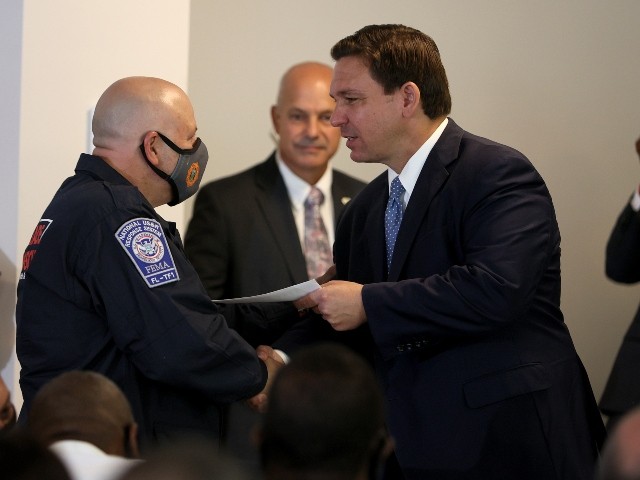 SURFSIDE, FLORIDA – AUGUST 10: Florida Gov. Ron DeSantis presents a check to a first responder during an event to give out bonuses to them held at the Grand Beach Hotel Surfside on August 10, 2021 in Surfside, Florida. DeSantis gave out some of the $1,000 checks that the Florida state budget passed for both first responders and teachers across the state. (Photo by Joe Raedle/Getty Images)

DeSantis ultimately aims to include a $73 million increase for officers, increasing the minimum pay for entry-level state law officers by 20 percent “to help our state law enforcement agencies recruit” more individuals. Additionally, he is proposing to increase the pay for veteran officers as well.

“My proposal also includes an increase in pay of 25 percent for all other state sworn law enforcement personnel to help our state law enforcement agencies retain the folks we already have and also to reward them for hard work serving and protecting Floridians,” DeSantis said.

In addition, the governor is asking for $124 million from the Legislature to increase salaries for correctional officers at state prisons, bringing the base salary up to $20 an hour.

The governor wants to also use $11 million for the Department of Juvenile Justice to increase minimum pay for juvenile detention officers to $17 an hour and $19 an hour for juvenile probation officers.

“Increasing salaries for state law enforcement by 20 and 25 percent respectively is going to make a real difference for those officers [and] their families,” DeSantis added.

Last month, the governor revealed he is hoping to sign legislation giving $5,000 bonuses to out-of-state officers who relocate to the Sunshine State— particularly those who are forced to leave their jobs due to vaccine mandates.

“So, NYPD, Minneapolis, Seattle, if you’re not being treated well, we will treat you better here,” he said. “You can fill important needs for us, and we will compensate you as a result.”