Hawley — a law former clerk to Supreme Court Justice John Roberts and considered a top Constitutional lawyer — said that after hearing the first day of oral arguments that Roe v. Wade is “very much in play.”

Hawley, who was also a former Missouri attorney general, explained that many Supreme Court justices asked “foundational questions” about Roe. He predicted the Supreme Court would rule 6-3 in favor of upholding the Mississippi law.

Hawley told Breitbart News this could be the case that could overturn Roe and solve one of the country’s greatest injustices. 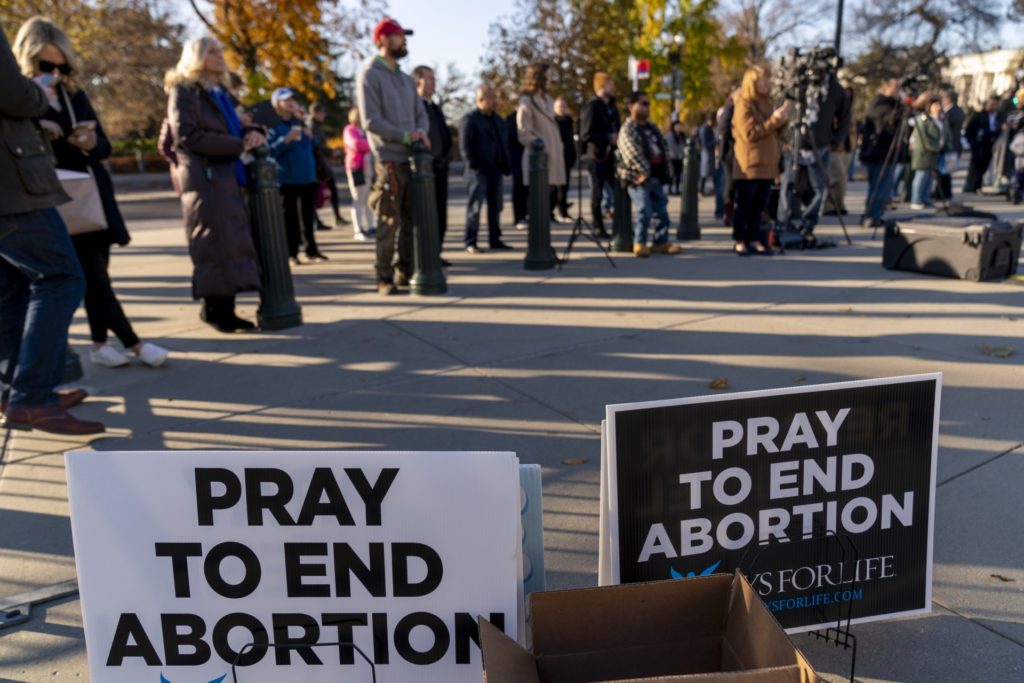 People listen during an anti-abortion rally outside of the Supreme Court in Washington, Tuesday, Nov. 30, 2021, as activists begin to arrive ahead of arguments on abortion at the court in Washington. (AP Photo/Andrew Harnik)

Hawley explained, “It would mean the reaching of a landmark goal that I mean, frankly, I have to say just personally, that Roe is one of the reasons that the major reason that I went into politics, and I think that’s true for many, many other people. That’s one of the major reasons I was interested in the law. And this is the greatest injustice of our lifetimes.”

The Missouri populist described this potential ruling as “seismic” and could actually turn “down the heat” on the abortion question because it would allow states to make their own laws restricting abortions.

I think you’d see real deliberation for the first time in 50 years, because the public would actually get to weigh in and their voices would actually matter,” he added.

Hawley said, “I just have to say that someone who believes that that row is one of the worst decisions ever handed down by the Supreme Court, I think it would be a monumental moral landmark and reverse a great injustice.”

“And after listening to the argument, I believe this could be the case that finally reverses the great injustice of Roe. It may all come down to Amy Barrett,” Hawley wrote Wednesday.

And after listening to the argument, I believe this could be the case that finally reverses the great injustice of Roe. It may all come down to Amy Barrett