“People living in counties that went 60% or higher for Trump in November 2020 had 2.7 times the death rates of those that went for Biden,” reports the far-left NPR.

In October, the death rate in Trump counties was six times higher than Biden counties.

Here’s more, and please note that the age issue is addressed…

NPR looked at deaths per 100,000 people in roughly 3,000 counties across the U.S. from May 2021, the point at which vaccinations widely became available. People living in counties that went 60% or higher for Trump in November 2020 had 2.7 times the death rates of those that went for Biden. Counties with an even higher share of the vote for Trump saw higher COVID-19 mortality rates.

In October, the reddest tenth of the country saw death rates that were six times higher than the bluest tenth, according to Charles Gaba, an independent health care analyst who’s been tracking partisanship trends during the pandemic and helped to review NPR’s methodology. Those numbers have dropped slightly in recent weeks, Gaba says: “It’s back down to around 5.5 times higher.”

The trend was robust, even when controlling for age, which is the primary demographic risk of COVID-19 mortality. The data also reveal a major contributing factor to the death rate difference: The higher the vote share for Trump, the lower the vaccination rate.

There’s just no question the vaccine works. It might not work as originally advertised. We were led to believe it would stop the spread. It doesn’t. It only reduces the spread. But that the vaccine reduces your chances of becoming infected and then reduces the symptoms once you are… Well, this is indisputable.

As far as the vaccine side effects, some 200 million Americans have now been vaccinated. Many of us have been walking around with the vaccine inside us for nearly a year and the doomsday scenario the vaccine skeptics predicted is just not happening.

In fact, I got my first booster Wednesday and will continue to get boosters as needed. 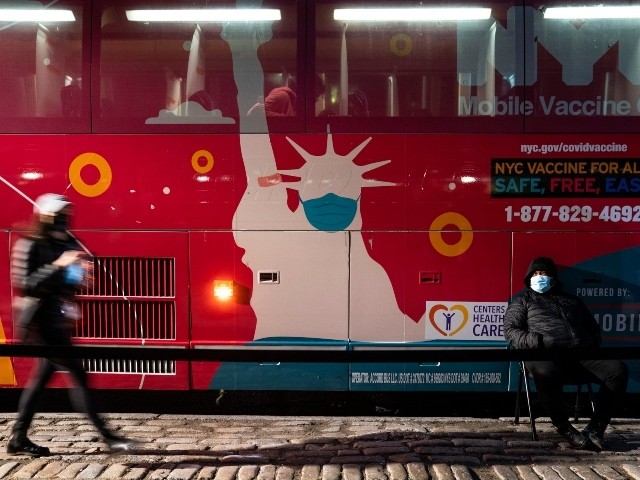 A mobile COVID-19 vaccination and booster shot site operates out of a bus on 59th Street south of Central Park as patients wait on the sidewalk, Thursday, Dec. 2, 2021, in New York. (AP Photo/John Minchillo)

But let’s go back to the death rate.

Isn’t the death rate the bottom line in all this?

Whenever the pro or anti-vaccine crowds mention the word “cases,” I immediately tune out. “Cases” is a meaningless number. The left uses “cases” as a propaganda tool to enact their left-wing fascism. The vaccine skeptics uses “cases” to say, See, see the vaccine doesn’t work!

Both sides are full of shit.

When participants were asked, “Who deserves more credit for the COVID-19 [Chinese coronavirus] vaccination program, President Biden or former President Trump?” 51 percent of voters sided with Trump and 41 percent sided with Biden. https://t.co/l3cqRWWIFV

Vaccine skeptics will then argue something like, “In the UK, 70+ percent of the people who die now are fully vaccinated!”

While that’s true, but there’s a reason for this that only backs up how well the vaccine works.

That points to an 86% (6/7) effectiveness rate of vaccines, which incidentally IS RIGHT IN LINE with what the clinical studies show.

The US data shows the same thing, except with unvaccinated people being 11 times more likely to die.

This is really strong evidence that vaccines work as advertised, yet it’s billed as the opposite. [emphasis original]

There’s also some data out there that shows the Oxford vaccine is not as good as our vaccines.

No one should be forced to wear a mask or take the vaccine. I refuse to wear a mask. My mask days are over. My town has a mask mandate, which I am happy to violate. I’m vaccinated, my wife is vaccinated, and that means we can resume normal life.

But that’s not the point. 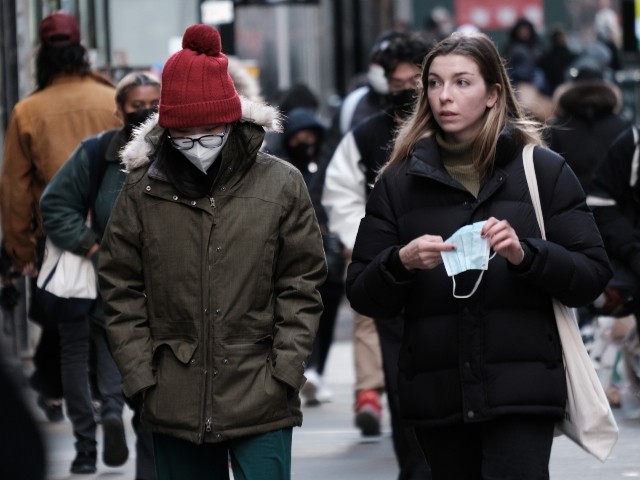 People wear face masks in Manhattan on November 29, 2021 in New York City. Across New York City and the nation, people are being encouraged to get either the booster shot or the Covid-19 vaccine, especially with the newly discovered omicron variant slowly emerging in countries around the world. (Spencer Platt/Getty Images)

The point is that the Trump Vaccine does work and Trump supporters by far make up the highest percentage of that unvaccinated in America—and now people in Trump counties are dying at a much higher rate than Biden counties.

Can you imagine anything that makes Joe Biden and CNN and the New York Times happier than knowing Trump voters are dying off at a much higher rate than their people?  Why do you think they’re so eager to entrench you in your anti-coronavirus vaccine position by insulting and degrading you? You are being deliberately manipulated by the organized left to dig into a position that benefits them.

You know, I don’t think I would die of the coronavirus, so I got vaccinated for two other reasons: 1) to protect my wife and other family members who are in the red zone,  and 2) to lessen my symptoms if I do catch it—which is the same reason I get my annual flu shot.

With very rare exceptions, there’s no downside to getting vaccinated. Sure, there could be some long-term effects we don’t know about,  but we’re already moving in on a full year with tens of millions of people vaccinated.

Regardless, there is plenty of downside for not getting vaccinated, including losing the country to Biden voters.

They want us dead and now we’re dying—even as Trump rightfully takes more of the credit he deserves for facilitating the delivery of what is truly a miracle vaccine.