What do we care about coronavirus “cases?”

We shouldn’t care about “cases.”

“Cases” is a nonsense number the fascist left use to keep us locked down and in those filthy, useless masks. “Cases” is the number the anti-Trump vaccine people use to say, See, the vaccine doesn’t work! There’s still COVID!!

Do not allow the left, who want you dead, to take your eye off the ball.

Watch the DEATH RATE because the DEATH RATE makes it very clear that the vaccine not only works, it works like a miracle. The left is all safe and vaccinated, while too many on the right are not. And now we’re the ones who are dying:

Conservative communities, on the other hand, have been walloped by the highly contagious Delta variant. (You can find data for hundreds of counties here.)

Since Delta began circulating widely in the U.S., Covid has exacted a horrific death toll on red America: In counties where Donald Trump received at least 70 percent of the vote, the virus has killed about 47 out of every 100,000 people since the end of June, according to Charles Gaba, a health care analyst. In counties where Trump won less than 32 percent of the vote, the number is about 10 out of 100,000.

And the gap will probably keep growing[.]

The organized left wants unvaccinated Trump voters to remain unvaccinated. That’s what they want. They want us dead. Sorry, it’s true, and everyone knows it’s true.

We’ve already seen the left openly embrace political violence by championing the left-wing domestic terrorists in Black Lives Matter and Antifa. And just last week, the New Yorker normalized eco-terrorism, including the blowing up oil pipelines. So the idea the left is using every psychological ploy in the book to convince you to remain unvaccinated is the opposite of far-fetched. It’s the only thing that makes sense. 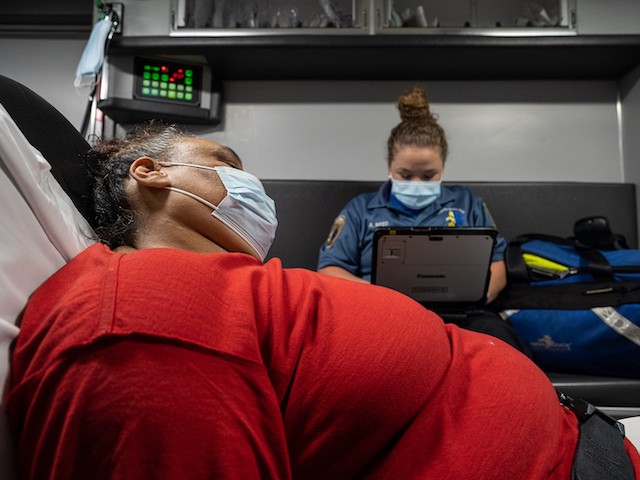 A patient experiencing a coronavirus emergency speaks with a member of Louisville Metro Emergency Medical Services in an ambulance outside of the patient’s home on September 13, 2021 in Louisville, Kentucky. (Jon Cherry/Getty Images)

As I wrote yesterday:

Unless you believe Trump-leaning counties are lying about their death rates, the numbers are indisputable. On top of that, the overall death rate between those who are vaccinated and those who are not is staggering. The CDC says that discrepancy is as high as 99 percent.

Gee, why do you think no one ever talks about that? Why do you think that instead of using a staggering fact like Ninety-nine percent of the people dying are unvaccinated, all we’re hearing is, The unvaccinated are stupid! and Haha, Trump people are dying! and You diseased pieces of shit should not be allowed in polite society!? That’s all we are hearing because people like Don Lemon and Howard Stern and Joe Biden and Joe Scarborough and the Washington Post and MSNBC and the rest of these fascists want you dead, want to back you into a psychological corner where you feel like an asshole for caving to people who hate you, who shame you, who dehumanize you if you take a life-saving vaccine.

Why do you think the governor of New York is attacking your faith if you don’t get vaccinated? It’s all a ploy to be as ugly as possible, to make it as hard for you as possible to back down and do what’s best for you. Who wants to feel like they’re surrendering to people as awful and evil as New York Gov. Kathy Hochul? 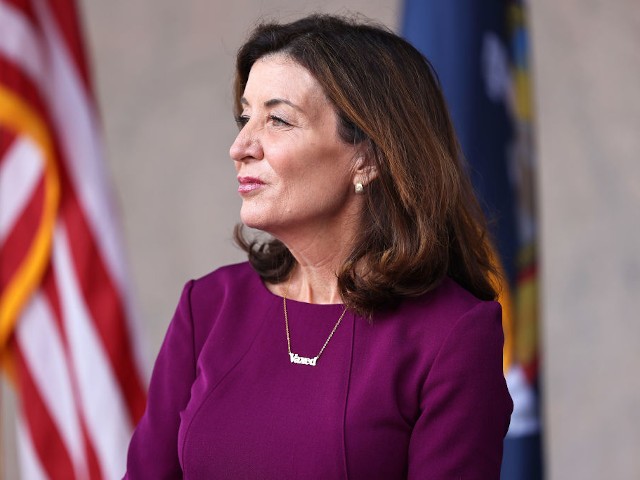 See how this works?

Somewhere around 1,500 to 2,000 people are going to die of the coronavirus today. How many would have survived had they gotten vaccinated? How many are lying on their death bed knowing they will die because they didn’t get a couple of shots? How many are connected to ventilators or gasping for air, feeling like, Hey, I’m really owning the libs now?

You can’t own the libs on a ventilator.

Dying is sad enough. An avoidable death… Man, I can’t imagine how the unvaccinated must feel knowing all they had to do was get a couple of shots of the Trump Vaccine. It’s heartbreaking to even think about it. Absolutely heartbreaking.

And for those who are confident the China Flu won’t kill you, why not get vaccinated to avoid getting sicker if you do catch it? You don’t get the flu vaccine every year to save your life. Instead, you get it to protect yourself from a miserable week in bed.

You are being manipulated by people who fucking hate you into not doing what is best for you. 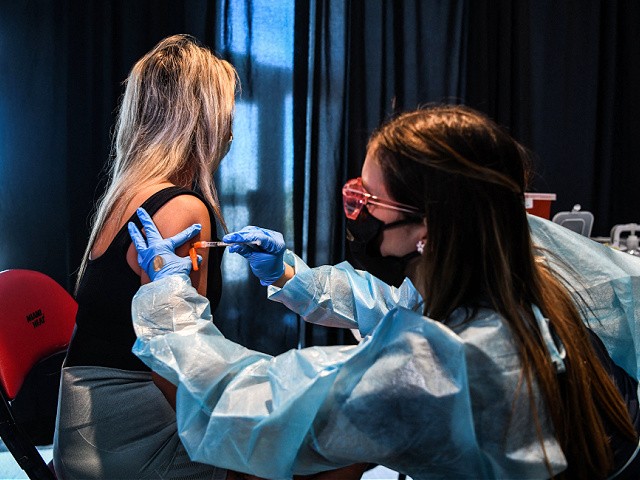 A health care worker administers a Covid-19 vaccine during a vaccination event hosted by Miami Heat at FTX Arena in Miami, on August 5, 2021. ( CHANDAN KHANNA/AFP via Getty Images)

You are being manipulated by people who fucking hate you into taking a chance with a virus made in China over a vaccine made in America by the Trump administration.

These people fucking hate you. What makes you think they want you to get a life-saving vaccine?

I am opposed to mandates of any kind. It’s your choice. But if you really want to own the libs, defy them and get vaccinated.