President Joe Biden’s multitrillion-dollar Build Back Better Act is a “direct assault on the very health and well-being of the American people,” the Republican Study Committee (RSC) warned in a memo sent to 158 House conservative offices Tuesday.

The bill itself will expand Obamacare subsidies, giving wealthier Americans access. This expansion of payments “would result in nearly 2 million people losing the health insurance they receive from their job, forcing them on to get worse care that costs more,” according to the memo. It also warned that the bill uses “budgetary gimmicks to hide its true cost to taxpayers, and in doing so creates a coverage cliff in 2025 when expanded Obamacare subsidies would expire.”

The Medicare expansion comes at a time when the underlying Medicare program is approaching a fiscal crisis. Medicare’s trust fund is facing insolvency in 2026. Medicare has never been this close to insolvency without a serious bipartisan focus on reigning in costs. If Democrats were serious about healthcare, they would be using reconciliation to ensure Medicare’s long-term viability for future beneficiaries.

“The left cares so much about advancing its depraved ideology it’s willing to risk American lives to do it,” Rep. Jim Banks’ (R-IN) memo continued, knocking the left for advancing “so-called drug price ‘negotiation,’” which the memo brands a “euphemism for fewer cures, fewer choices, and a sicker American public.” 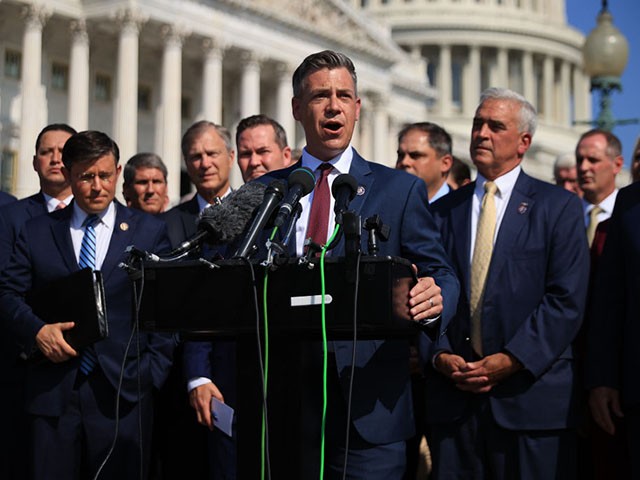 Rep. Jim Banks (R-IN), a member of the U.S. Navy Reserve Supply Corps who served in Afghanistan, speaks during a news conference to criticize the Biden Administration’s handling of the withdrawal from Afghanistan outside the U.S. Capitol on August 24, 2021 in Washington, DC. (Photo by Chip Somodevilla/Getty Images)

Ultimately, the memo warns that the far-left’s agenda is nothing more than “another step in the left’s long march to socialism.” Democrats, it continues, are prioritizing their “radical ideology ahead of finding common-sense solutions” which could ultimately cost lives.

The House passed the massive measure in November, 220-213. It now faces an uncertain future in the Senate as House Democrats push the Senate to slip in a massive amnesty scheme for millions of illegal aliens into the Build Back Better Act.

On Monday, moderate Democrat Joe Manchin (D-WV) — a crucial swing who could determine the legislation’s future — signaled that the Build Back Better Act, as it stands, does not have his support.

“I don’t think that’s a fair evaluation of saying we are going to spend X amount of dollars but then we are going to have to depend on coming back and finding more money,” Manchin said, criticizing the use of budget gimmicks.

According to the Congressional Budget Office (CBO), the Build Back Better Act would cost the U.S. $4.9 trillion over the next ten years.