The House passed the $1.7 trillion Build Back Better Act early on Friday morning, sending the bill to the Senate where it faces an uncertain future.

The House passed H.R. 5376, the Build Back Better Act, which is the Democrats’ reconciliation infrastructure bill.

The bill passed 220-213, with overwhelming Democrat support, and strong Republican opposition to the bill.

Only one Democrat, Rep. Jared Golden (D-ME), a swing district Democrat, voted against the bill.

The legislation would add $750 billion to the to the deficit over five years. 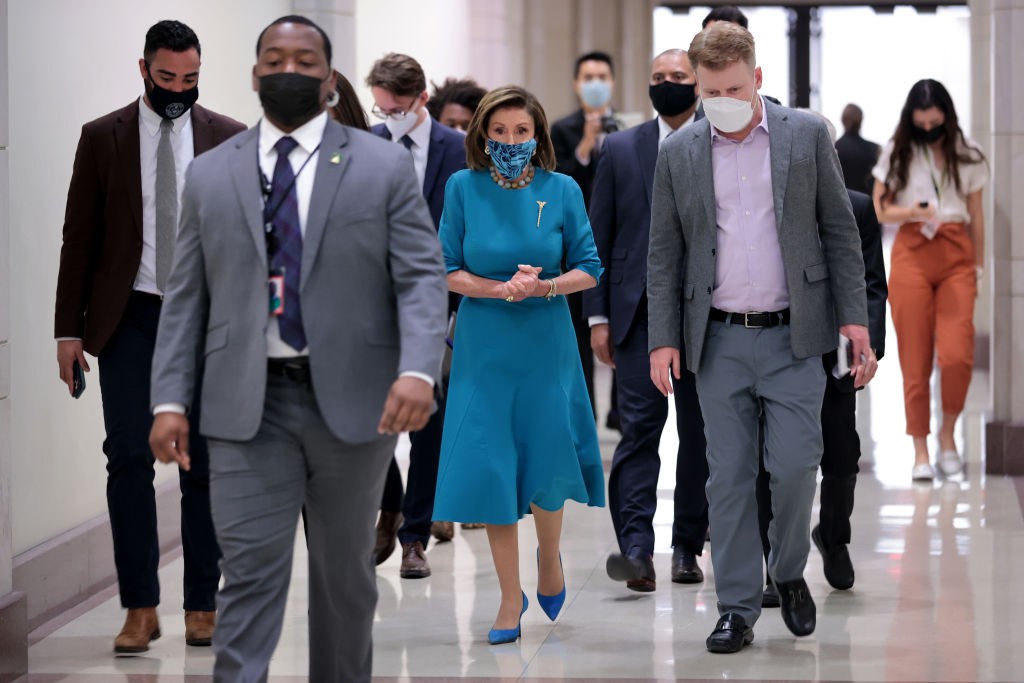 However, other experts believe that the legislation could cost drastically more, as the legislation uses arbitrary policy sunsets and expirations to make the bill appear less expensive and comply with the rules for budgetary reconciliation.

The Committee for a Responsible Federal Budget found that the legislation could cost as much as $4.91 trillion over ten years if Congress were to continue to fund the programs that had the arbitrary policy sunsets.

McCarthy now holds the record for the longest speech on the House floor.

Rep. Jim Banks (R-IN), the chairman of the Republican Study Committee (RSC), has catalogued many of the most radical policies in the Build Back Better Act.

21. Includes legislative hull for Biden’s vaccine mandate: Increases OSHA penalties on businesses that fail to implement the mandate up to $700,000 per violation (page 105) and includes nearly a billion dollars in funding for the Department of Labor to increase enforcement of these penalties (page 103).
22. Gives unions near-total control: The bill creates a new civil penalty against employers up to $100,000 and subjects directors and officers to penalties that wouldn’t apply to union bosses and officials (page 108). It coerces businesses to meet union boss demands by increasing Fair Labor Standards Act penalties by an astronomical 900% (page 105).

23. Makes unions bigger and more powerful: The bill revives a provision from an earlier version that would subsidize union dues that would only serve to strengthen the influence of union bosses and not American workers (page 1955).

26. Drives up costs on Americans’ utility bills: Includes a tax on natural gas eventually up to $1,500 per ton that could cost the American economy up to $9.1 billion and cost 90,000 Americans their jobs (page 361).

28. Gives wealthy Americans tax credits: Hundreds of billions of dollars in “green energy” tax credits will be given to those who can afford expensive electric vehicles and other “green” innovative products (page 1434).

30. Grants Deportation Protection and Work Permits to Illegal Immigrants: The bill would grant 5-year parole to certain illegal aliens who file for parole, pay a fee, and complete a law enforcement background check “to the satisfaction of [Biden’s DHS Secretary].” Such a parole would include both travel and work permits, a REAL ID driver’s license, and would be extendable until 2031 (page 862).

31.Increases visa limit: Democrats would bypass annual limits on immigration by adding unused employment-based visas on top of the existing 226,000 family-preference visa floor and “recapturing” hundreds of thousands of previously issued visas from past years. The bill would also give lottery visas to anyone who was denied one due to the Pandemic or because of President Trump’s immigration policies. (page 865).

32. Grants fast-tracked green cards for those seeking middle-class careers in America: Language included in the bill exempts certain aliens from the annual green card statutory limits and has been described as a “hidden pipeline for U.S. employers to flood more cheap foreign graduates into millions of middle-class careers needed by American graduates” (page 867).

33. Increases energy dependence on OPEC, Russia and China: The bill includes mineral and energy withdrawals on federal lands (page 912) and overturns provisions included in the Tax Cuts and Jobs Act that authorized energy production in the Arctic that will result in 130,000 Americans losing their jobs and $440 billion in lost federal revenue (page 933).

34. Exacerbates the chip shortage: The bill would fund the conversion of the Postal Service and General Services Administration vehicle fleet from internal combustion engines to electric engines at a time when there is a global microchip shortage and crippled supply chains (page 936).

37. Paid Worker Leave Entitlement for the Unemployed: The new paid leave entitlement would mandate workers get 4 weeks of paid leave under which workers could “self-attest” their eligibility and do not even need to be currently employed. (page 1065).

38.Advances a totalitarian and paternalistic view of the federal government: Includes grants for organizations to treat individuals suffering from “loneliness” and “social isolation.”(page 1252)

39. Further detaches individuals from employment and more reliant on government handouts: The bill spends hundreds of billions on welfare through manipulating the tax code [not even including the expansions of Obamacare subsidies] (page 1636).

40. Tax benefits for the top 1%: The bill would increase by more than seven-fold the cap on state and local tax deductibility, meaning many of the top 1% wealthiest Americans would pay less in taxes. (page 1729)

41. Tax credit for wealthy donors who give to woke universities: The bill creates a new tax credit program that gives tax credits worth 40% of cash contribution that are made to university research programs (page 1717).

42. Expands worst parts of Obamacare: Obamacare’s job-killing employer mandate will become more severe by adjusting the definition of “affordable coverage” to mean coverage that costs no more than 8.5 percent of income rather than current law’s 9.5 percent of income (page 1656).

43. Increases taxes on Americans at every income level: The bill’s trillions of dollars in tax hikes will be felt by those making under $400,000 per year, contrary to what the White House says.

44. Lowers wages for working families and moves jobs overseas: The 15% minimum tax on book income is a double tax on investment. This would raise taxes on American companies by hundreds of billions of dollars, kill 25,000 jobs, and reduce wages by 0.1%, all in the name of complying with Biden’s desire to appease global elites through a global minimum tax. (page 1731)

47. Violates Americans’ financial privacy: $80 billion slush fund to hire an 87,000-IRS-agent army that would be used to carry out the Biden administration’s plan to review every account with more than $10,000 worth of transactions in a year. The plan includes hiring 5,000 new armed criminal agents. (page 1923).

48. Increases out of pocket costs for those who rely on prescription drugs: The bill will repeal the Trump- era Rebate Rule which passes through rebates directly to consumers at the point of sale (page 2114).

The legislation will go to the Senate, where it remains uncertain if moderate Democrats such Sens. Joe Manchin (D-WV) and Kyrsten Sinema will support the bill. Manchin has expressed concerns about the paid leave program and remains concerned about how the bill might impact inflation. Democrats cannot afford to lose one vote to pass the bill.