President Joe Biden’s federal agencies are continuing to purge the term “alien” to describe foreign nationals living in the United States, often illegally, in favor of the term “noncitizen,” a report reveals.

In April, Biden’s Department of Homeland Security (DHS) ordered officials to stop describing foreign nationals in the U.S. as “aliens” and instead use the term “noncitizen” regardless of an individual’s immigration status.

According to the Center for Immigration Studies’ Robert Law, USCIS is continuing to purge the term “alien” — which is used more than 1,700 times in its manual — from the agency’s website.

Apparently, this is quite a labor-intensive task, as USCIS is still making updates 10 months later. Just this week alone, USCIS swapped “alien” for “noncitizen” on the following webpages: 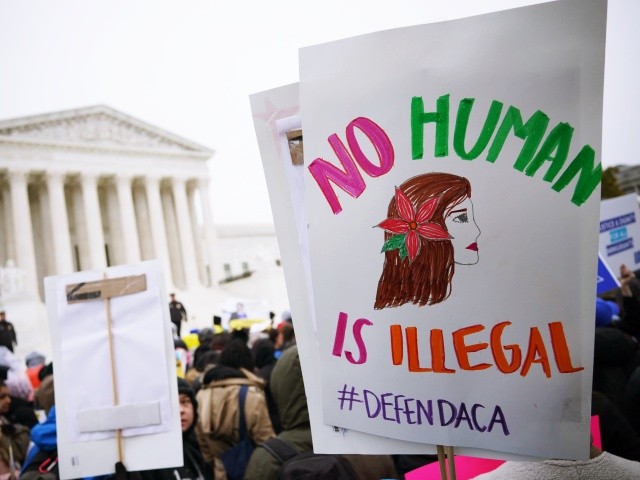 Immigration rights activists take part in a rally in front of the US Supreme Court in Washington, DC on November 12, 2019. (MANDEL NGAN/AFP via Getty Images)

The term “alien” is regularly used as a legal definition to describe a foreign national in the United States. The Immigration and Nationality Act (INA) codified the term in law and defines it as “any person not a citizen or national of the United States.”

Despite objections from the Biden administration over the terms “illegal alien” and “assimilation,” the terminology was readily used by the late civil rights icon Rep. Barbara Jordan (D-TX) who advocated for legal immigration reductions to boost the quality of life, wages, and job opportunities for America’s working and middle class.

In a 1995 op-ed for the New York Times, for instance, Jordan blasted “policies that permit the continued entry of hundreds of thousands of illegal aliens and blur distinctions between what is legal and beneficial and what is illegal and harmful.”