Christian Collins, running in Texas’s 8th congressional district with Sen. Ted Cruz’s (R-TX) endorsement, is campaigning on a hardline immigration agenda after once taking a softer stance on the issue in a master’s thesis nearly ten years prior.

Collins, whose Liberty University thesis was published in 2013, reviewed the voting patterns of Hispanics compared to their beliefs on economic and social issues with an emphasis on the 2012 presidential election. The thesis was removed from Liberty University’s website though Breitbart News has since obtained a copy.

“This paper has been withdrawn,” a note reads on the Liberty University page where Collins’s thesis was once publicly available.

The thesis was written and published amid the backdrop of the 2012 presidential election and an amnesty effort by a group of eight Senate Republicans and Democrats known as the “Gang of Eight.” While then-GOP presidential candidate Mitt Romney lost to then-President Obama in the 2012 election, the amnesty effort the following year was pushed fiercely by the political establishment but ultimately failed.

In the thesis, Collins suggests that Romney was “not on the winning side” of the immigration issue because “he neglected to make Hispanics feel included in his vision for America, having emphasized more than once that he did not support a pathway to citizenship or permanent residency for” illegal aliens.

Collins also blamed “the rhetoric used by some members of the Republican Party, including … Romney” on immigration as having “only alienated Hispanics” while then-President Obama signed the Deferred Action for Childhood Arrivals (DACA).

All while in contrast, the rhetoric used by some members of the Republican Party, including Republican Presidential hopeful Mitt Romney, only alienated Hispanics. [Emphasis added]

In the final analysis, Romney eventually moderated his stance on illegal immigration reform leading up to November, but in no way did it help him. In the 2012 Election, President Incumbent Barack Obama garnered 71% of the Hispanic vote. Governor Romney earned the least support amongst Hispanics of any Republican Presidential candidate in the last 20 years. [Emphasis added]

Romney blamed much of his loss on his failure to connect with Hispanic voters. This may well be due in part because he neglected to make Hispanics feel included in his vision for America, having emphasized more than once that he did not support a pathway to citizenship or permanent residency for immigrants who came to the U.S. illegally. In summary, the 2012 Presidential Election may have indicated that some Republicans were not on the winning side of this issue. Governor Mitt Romney was clearly not in any case. [Emphasis added]

In statements to Breitbart News, Collins said he believes Romney lost the election because he was not hard enough on former President Obama’s record, particularly over the deadly Benghazi terrorist attack, and he allowed the establishment media “to dictate the narrative and attack him relentlessly.”

“Mitt Romney was also (and still is) a middle-of-the-road moderate that didn’t stand then or now for these principles,” Collins wrote. Collins continued:

“Back then, Democrats’ and Republicans’ orthodoxy virtually agreed on everything from trade to foreign policy and immigration, but disagreed on some social issues and marginally on the corporate tax rate,” Collins continued. “It’s little wonder why the establishment coalition of Democrats and Republicans in Washington is called the ‘Uniparty.'”

The thesis mimics that of the Republican National Committee’s (RNC) infamous “autopsy” report following the 2012 election. The autopsy claimed that Republicans, in order to win elections in the future, must embrace amnesty for illegal aliens.

The year Collins’s thesis was published, Senate Republicans in the Gang of Eight attempted to garner support for what would have become the largest amnesty in American history — allowing most of the 11 to 22 million illegal aliens living in the United States to avoid deportation while securing work authorization and, eventually, green cards.

A supporter of the amnesty was then-San Antonio Mayor Julian Castro (D), whom Collins interviewed for the thesis. In 2013, Castro said he supported the amnesty partially because it helped provide businesses with endless flows of foreign workers to hire from. Castro said:

I’m confident that the business community of Texas … sees the benefit of passing this legislation. From high-technology companies that would benefit from more H-1B visas to industries like the restaurant industry … that rely on lower-skilled workers. Industries across the U.S. have said loudly and clearly that this immigration reform is good for business.

In Collins’s interview, Castro framed the future of Texas and the Republican Party:

Q: Is the evolution of Texas, that it’s likely to become a more competitive state, a function of simple demographics? Is it a function of a Republican Party that’s moved too far to the right? Or is there something more Democrats have to do to become? [Emphasis added]

A: I would say that it’s three things: it’s demographics that everyone talks about, it’s the movement of people from more moderate states into Texas because Texas has done well economically compared to other states during this downturn, and third that Republicans are losing the business and moderate community because they’re moving so far to the right. Of course, it’s going to take more than just standing in place for Democrats to win. I do think that they could win in 15 years by just standing in place, but to accelerate that, they need a very compelling message, they need strong candidates. It’s when the message, the candidate and those three factors come together – especially the demography – that we’ll hit the end zone. [Emphasis added]

Collins also asked how Republicans could better win over Hispanic voters, to which Castro replied the GOP must adopt a pro-amnesty platform and change its positions on voter ID:

Q: How successful do you think the Republican Party can be and what would they have to do a better job winning Hispanic votes? [Emphasis added]

A: Hispanics are generally Democratic voters, even though it is true that it’s a community of strong faith and one might think that on some issues they would gravitate toward Republicans. The rhetoric around immigration reform and most importantly the policies that Republicans have adopted – whether it’s voter ID or, in Texas, underfunding education, opposing the expansion of healthcare – these policy decisions send out a strong message to many Hispanics that’s unwelcoming, on top of their rhetoric on immigration reform. So they have impressive office holders like [Sen. Marco] Rubio, [Nevada Gov.] Brian Sandoval, [New Mexico Gov.] Susanna Martinez. But it’s not about personalities; it’s about the policies. What the Republican Party needs if it wants more Hispanic votes is to change its policies. It’s going to take more than knocking on doors or candidates speaking a few lines in Spanish. It’ll take a moderation of their policies. [Emphasis added]

Collins told Breitbart News he is running on a hardline immigration agenda — a shift that is indicative of the larger growth within the Republican Party in the last decade to embrace the plight of working and middle class Americans over the interests of big business’s bottom line.

“This paper was written in college shortly after the election in 2012, almost 10 years ago,” Collins wrote in a statement. “Since then, I’ve spent my entire adult life fighting for conservative principles, most importantly border security.”

Collins said the U.S. must finish constructing a wall along the southern border that had started construction decades ago with bipartisan support but became partisan when Democrats sneered at the proposal by former President Trump.

Ending Catch and Release by fully reinstating the Remain in Mexico policy, where border crossers are almost immediately returned to Mexico while awaiting their asylum hearings, are among some of the most popular positions Collins is now running on.

“I also support a moratorium on immigration until we stop the flow of illegal immigration,” Collins told Breitbart News.

In a NumbersUSA survey, Collins has committed to reducing legal immigration levels below their current historic highs, as well as opposing birthright citizenship, mandating E-Verify, and cutting various work visa programs that often displace working and middle class Americans from blue collar and white collar jobs while depleting wages in their respective industries.

The survey and Collins’s answers were shared with Breitbart News: 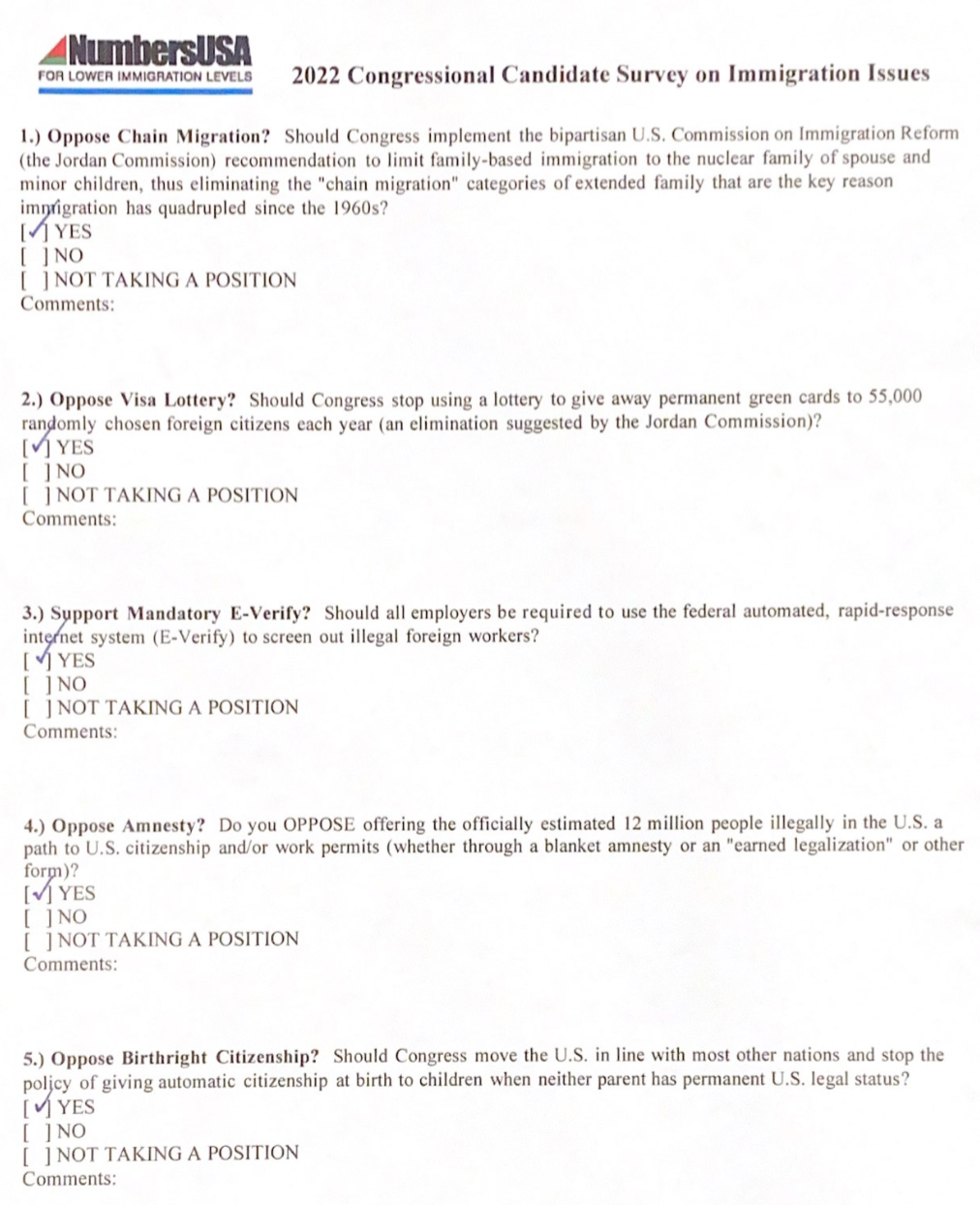 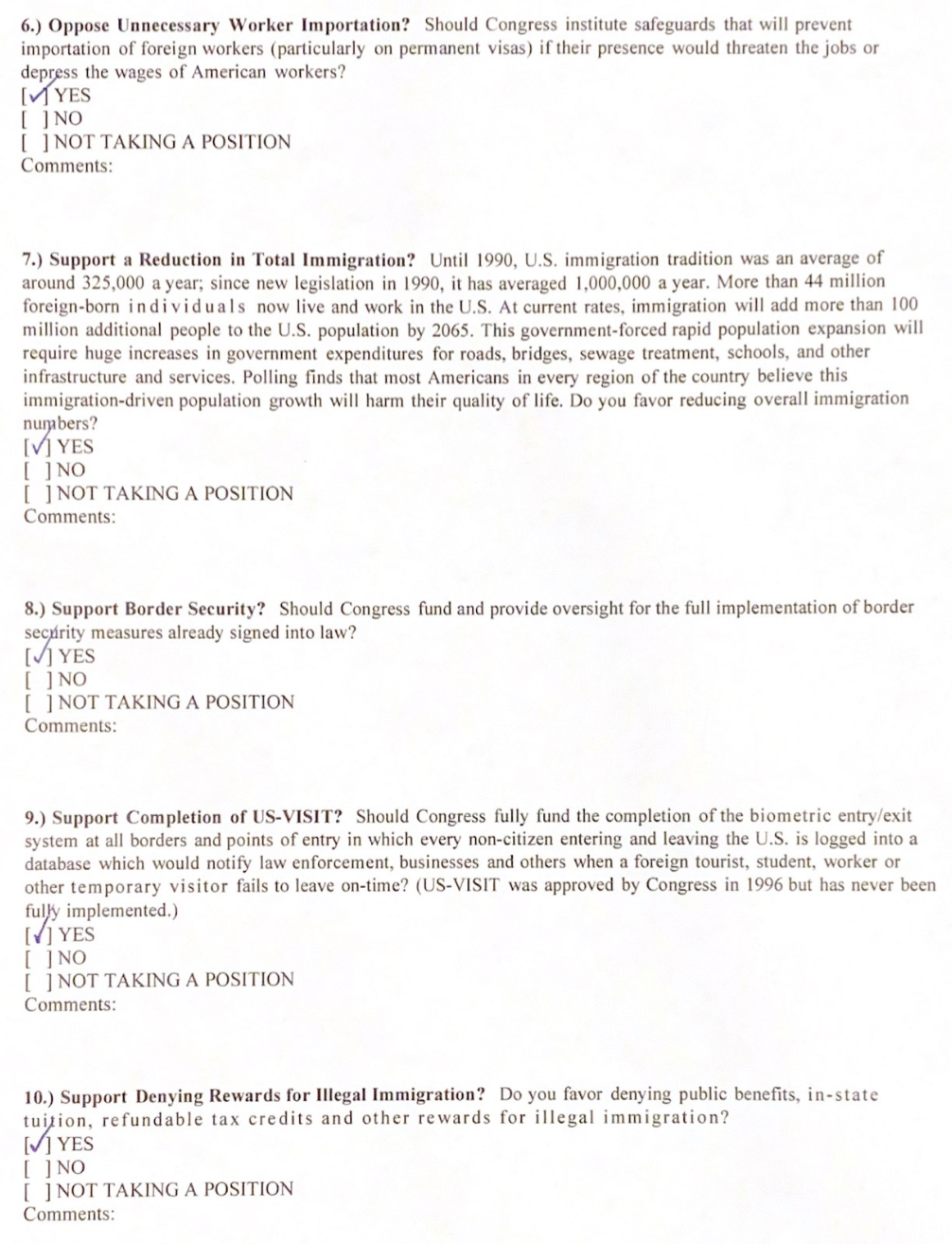 Collins blasted President Joe Biden and his administration for their handling of illegal immigration over the last year whereby nearly two million illegal aliens arrived at the southern border and hundreds of thousands were released into the U.S. interior.

Their goal, Collins said, is to “create a massive new voting bloc” of voters to overtake states like Texas. Castro has been open about the Left’s intended goals with immigration:

The Hispanic vote in Texas will continue to increase. By 2024 Democrats can win Texas, Arizona and Florida. A big blue wall of 78 electoral votes. https://t.co/6FT0NJyjyP

“Sadly, Biden’s and the Left’s open border policies have caused an unprecedented flow of child, sex, and drug trafficking, including fentanyl that’s killed over 100,000 this year alone in the U.S; not to mention the loss of billions of dollars due to illegal immigration every year at the expense of the U.S. taxpayer,” Collins wrote.

“The bottom line is that a nation without borders is not a nation at all,” Collins continued. “Without this strong stance by our leaders, we will lose our sovereignty, security, and our identity as a country.”

Collins has been endorsed by Sen. Ted Cruz (R-TX), among others. In 2013, during the Gang of Eight amnesty push, Cruz joined Sen. Jeff Sessions (R-AL) in proactively fighting the amnesty.

“One of the most egregious aspects of the Gang of Eight bill is its intersection with Obamacare, which penalizes businesses that hire a U.S. citizen or a legal permanent resident over an illegal immigrant,” Cruz said during a rally against the amnesty, with Sessions, in 2013.

Like Cruz, the House Freedom Caucus is supporting Collins in the congressional race and its political action committee (PAC), House Freedom Fund, has officially endorsed his candidacy. A report from Texas Citizen Journal notes that as of early November 2021, Collins has received $244,000 from House Freedom Action.

A number of Freedom Caucus members similarly fought the Gang of Eight amnesty and the Republican establishment’s efforts to reshape the party into a pro-amnesty coalition.

“The president and Senate Gang of Eight push an amnesty bill that fails all three tests. It costs American taxpayers a 50-year net tax loss of $6.3 trillion,” Freedom Caucus member Rep. Mo Brooks (R-AL) said in 2013. “It gives amnesty to people whose first step on American soil was illegal conduct. It does not secure America’s borders.”

Another Freedom Caucus member, Louie Gohmert (R-TX), led House Republicans in an effort to stop the Gang of Eight amnesty.

Collins is running in a crowded field of Republicans for the Texas House seat, against other Republican candidates like Rep. Paul Gosar-endorsed Jonathan Hullihan and Rep. Dan Crenshaw-endorsed Morgan Luttrell.