House GOP Leader Kevin McCarthy told Breitbart News that as speaker of the House he would strip Reps. Adam Schiff (D-CA) and Eric Swalwell (D-CA) of their assignments on the House Permanent Select Committee on Intelligence (HPSCI) and Rep. Ilhan Omar (D-MN) of her committee assignment on the House Foreign Affairs Committee.

McCarthy also said Swalwell would not be allowed to serve on the Homeland Security Committee either. McCarthy’s comments came during the latest On The Hill long-form video special, taped in December at an Eastern Market establishment on Capitol Hill in Washington, DC.

“The Democrats have created a new thing where they’re picking and choosing who can be on committees,” McCarthy said. “Never in the history [of Congress] have you had the majority tell the minority who can be on committee. But this new standard which these Democrats have voted for—if Eric Swalwell cannot get a security clearance in the private sector, there is no reason why he should be given one to be on Intel or Homeland Security. He will not be serving there.” 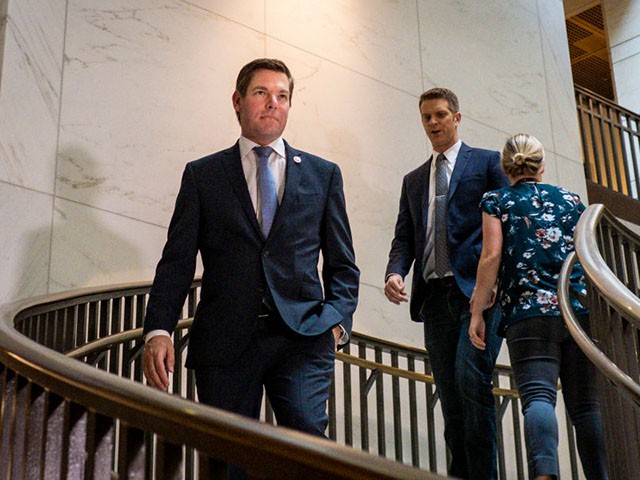 “Yes,” McCarthy replied when asked if that meant he will use the standard Democrats have created by stripping Reps. Marjorie Taylor Greene (R-GA) and Paul Gosar (R-AZ) of their committee assignments to remove Swalwell from those two committees.

McCarthy also said he will remove Omar from the House Foreign Affairs Committee.

“Ilhan Omar should not be serving on Foreign Affairs,” McCarthy said. “This is a new level of what the Democrats have done.”

In addition, he said he will pull Schiff—the current HPSCI chairman—off the Intelligence Committee.

“You look at Adam Schiff—he should not be serving on Intel when he has openly, knowingly now used a fake dossier, lied to the American public in the process and doesn’t have any ill will [and] says he wants to continue to do it,” McCarthy said. “We’re going to reshape—think about what happened in Afghanistan. Why did Afghanistan collapse so fast? Was the Intel Committee under Adam Schiff focused on impeachment and not on the safety of America? Why are people coming across the border that are on a terrorist watch list? What are they doing about it? Their own members on that committee say it’s not happening when it’s true. We need to have an Intel Committee that looks at what’s happening around the world and keeps America safe. It should do exactly what it was created [to do]—overseeing of our agencies and others. We’re going to hold people to a higher standard in the process if they want to be on the Intel Committee and the training to be a part of it. Take the politics out of it.” 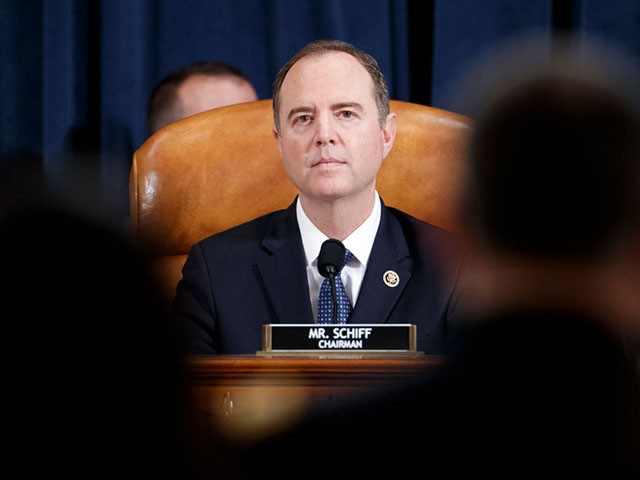 McCarthy’s pledge to reform the Intelligence Committee and remove problematic Democrats like Schiff and Swalwell comes as the committee’s longtime Republican lead—onetime chairman and then ranking member now former Rep. Devin Nunes (R-CA)—left Congress to head up former President Donald Trump’s new social media venture. Rep. Mike Turner (R-OH) has been named the new ranking member of the committee and would presumably take over as chairman if the Republicans win the majority in November.

Each of these three Democrat members—and more—has a litany of problems that the standard Democrats set by removing Greene and Gosar from committee assignments opens them up to removal themselves. In the case of Schiff in particular, as chairman of the Intelligence Committee, he infamously read out a fictitious rendition of the famed call between Trump and Ukrainian President Volodymyr Zelensky—where Schiff made up nonexistent call contents for dramatic effect as Democrats moved to impeach Trump the first time. He also falsely claimed that he had “more than circumstantial” evidence of collusion between Trump and Russians, and continued claiming there was collusion even after special counsel Robert Mueller found no evidence to back up those claims—something that forced every HPSCI Republican to sign a letter demanding he resign as chairman.

In the case of Swalwell, the California Democrat and failed 2020 presidential candidate had a long-running affair with a woman named Fang Fang—who the intelligence community has identified as a spy for the Chinese Communist Party. As Breitbart News has reported, a still-classified intelligence report on the Swalwell-Fang Fang affair details explicit sexual relations between the two of them. 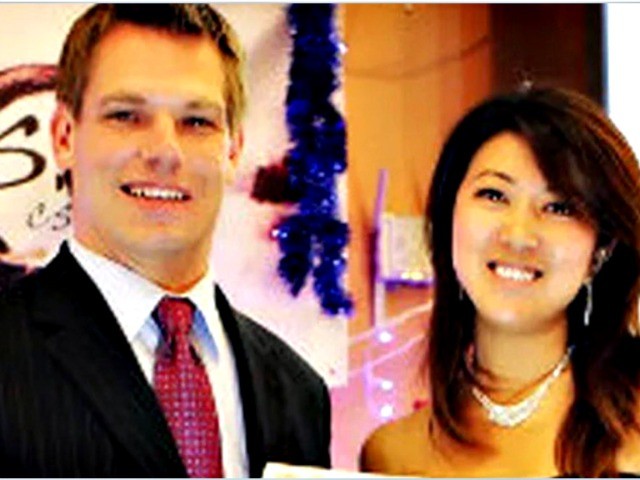 Eric Swalwell with Fang Fang at an October 2012 student event.

As for Omar, she has made a number of antisemitic comments over the years and also downplayed the Sept. 11, 2001, Al Qaeda terrorist attacks that killed thousands of Americans. “Some people did something,” Omar once said about 9/11. Republicans have long wanted her gone from the Foreign Affairs Committee, arguing that her history of antisemitism should not be elevated. Given McCarthy’s comments here, it seems all of these issues will be addressed if and when the GOP takes back the majority in the House.

McCarthy also noted that he has been trying for years to establish a select committee to investigate the Chinese Communist Party. An effort that was previously bipartisan—House Speaker Nancy Pelosi once supported it—turned partisan in 2020 when Pelosi at the beginning of the coronavirus pandemic withdrew Democrat support. McCarthy moved forward with a minority-led China task force anyway, which produced recommendations on dealing with the problems a rising China poses, and hinted in this interview he may make a full committee to lead such matters in the next Congress.

“I’ve looked and tried to get a committee on China,” McCarthy said. “She [Pelosi] walked away from it when it took me eight months to get it—she walked away from it and you watch what’s happening today. Would we have the supply chain problem? We did a China task force—we didn’t stop. You read through the recommendations—and those are the things we are going to implement. But America would be stronger today had we been able to do that sooner.”

While the Democrat double standards are definitely a major problem McCarthy intends to face head on if and when he gets to the speakership, he does have issues inside the GOP conference too—as evidenced by divisions over policies and personalities. In this interview, taped in the immediate aftermath of Rep. Lauren Boebert (R-CO) fending off Democrat efforts to remove her from committees as well over a crude joke she made about Omar, McCarthy explained how he deals with it.

“The people that are causing this problem are not in the Republican conference,” McCarthy said. “They’re the Democrats and the Democrat policy. The media tries to get Republicans to fight together. I believe in the Reagan 11th Commandment—we don’t have to be attacking one another. We know when we attack one another, we empower Democrats. We need to stop that policy from them. We need to unite together and move forward and that’s exactly what we’ve been doing, and I think members on all sides—bring them closer together, stop any infighting, and if a member individually makes a mistake they apologize for it. They own up to it. They don’t harm the rest of the conference by that. Lauren Boebert made a joke, referenced something, and then she apologized to the public and then she called Ilhan Omar about it.” 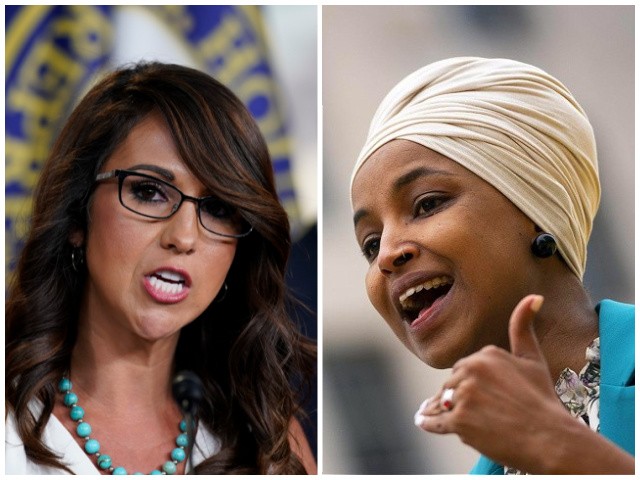 To bolster his case that the media drives much of this to divide Republicans, McCarthy pointed to how during that same week Rep. Alexandria Ocasio-Cortez (D-NY) falsely called McCarthy the leader of the “Ku Klux Klan conference”—and that nobody asked Pelosi about that false smear during her press conference that week.

“In that same week [as the Boebert/Omar controversy],” McCarthy said, “you had a member of the Democratic Party saying I was working with the Ku Klux Klan but no media asked Pelosi about that. You had Ilhan Omar, who earlier referred to my support for Israel in an earlier Congress was [as] ‘all about the Benjamins’ and never apologized. They hold these different standards. We’re going to have one standard for all. The number one thing I think too is listen—not just members of Congress but Republicans across the country and your listeners—think for one moment. Don’t allow the pain the Democrats are causing to take our reaction off on Republicans. They’re not causing it. Let’s unite together and bring independents with us. It’s the policy of the Democrats. Let’s focus on this election.”

McCarthy has had a much different approach to dealing with members across the conference and in particular the House Freedom Caucus than his predecessors former Speakers Paul Ryan and John Boehner.

“Because I’m a conservative,” McCarthy said when asked about it, before explaining how he will manage things differently than they did moving forward. 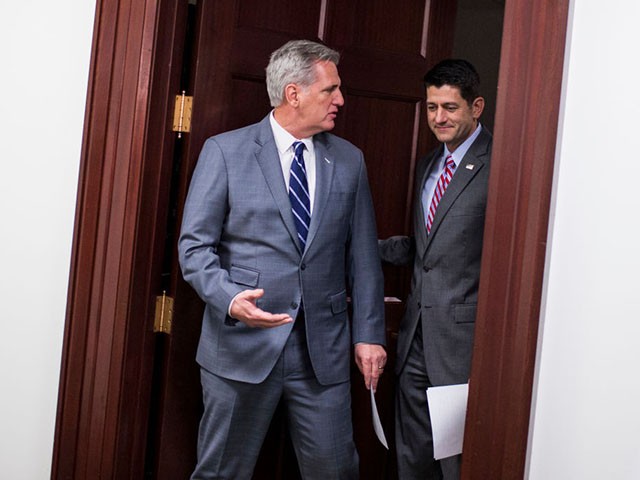 “I just think in the past the conference got too much into different identities,” McCarthy said. “I think we’re one Republican conference. I want to treat everybody equal. I understand not everyone who comes to Washington, even though you come as a Republican, is exactly the same—and every district is not the same. So, you’re going to have some difference of opinion but 90 percent of your philosophy is completely the same. So work on the things we agree upon, bring everybody in, and don’t think just because somebody is considered a moderate or a conservative they can only serve on certain committees. We’re a microcosm of society so they should be able to serve everywhere. I want to have a more open dialogue, and I’m going to be more open when I disagree. The one thing that happens at the end of the day is the conference elects me as leader. I’m going to have to make decisions. But I’m going to make those decisions on what I think is best for the country. Some will like it and some won’t. You have the ability to give me your input but at the end of the day I’m going to make a decision and we’ve all got to work towards forward. I do not like the idea of people going out in the party criticizing one another. That’s got to stop. It’s the Democratic policy, and I know the frustration it causes, but there are a lot of things Pelosi does that try to make Republicans fight among themselves. Let’s not take the bait, let’s focus on the American public, and work together to make that happen.”

On that note, too, McCarthy also promised that committee assignments will be made on merit alone and that membership in the Freedom Caucus or any other group will not preclude anyone from serving on key committees—a departure from how Boehner and Ryan managed such matters in the past.

“For the insiders, yeah, what people probably felt in the past ‘oh, well if I had some belief, I couldn’t be on some committees.’ Under my leadership, that’s never been the case,” McCarthy said. “You’ve got Freedom Caucus people who are ranking members of committees. You’ve got them on every single committee there is, and you’ve got moderates on every single committee. No one is going to be held back. You get elected to this conference from your constituents. When you get into the conference, you get elected to your committees by your conference. Nobody should be withheld from anything. Now, that doesn’t mean you are guaranteed a committee. What’s tough is there’s only so many slots … but you will not be withheld from [a slot] because of the case of what organization internally you belong to.”