Gov. Ron DeSantis (R) delivered Florida’s State of the State address on Tuesday, touting the Sunshine State as an oasis for freedom and “America’s liberty outpost” in a nation of lockdown enthusiasts who seek control through what the governor described as a “biomedical security state that curtails liberty, ruins livelihoods, and divides society.”

Addressing a joint session of the legislature in Tallahassee, he emphasized the freedom Floridians enjoy.

“Together we have made Florida the freest state in these United States,” DeSantis said as he drew a stark contrast between his state and those whose leaders have “consigned the people’s rights to the graveyard” over the past two years.

All the while, Florida has stood as “freedom’s vanguard,” protecting the rights of individuals and businesses by fighting unconstitutional mandates and ensuring children have the opportunity to thrive.

“Florida has become the escape hatch for those chafing under authoritarian, arbitrary and seemingly never-ending mandates and restrictions,” DeSantis said, noting that the rules and regulations that have the country under a spell are “grounded more in blind adherence to Faucian declarations than they are in the constitutional traditions that are the foundation of free nations.” 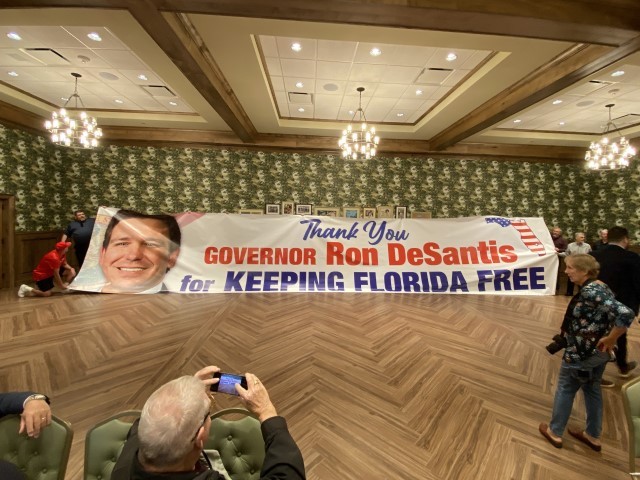 “Florida is a free state,” he said to applause. “We reject the biomedical security state that curtails liberty, ruins livelihoods and divides our society. And we will protect the rights of individuals to live their lives free from the yoke of restrictions and mandates,” he said before touting the many accomplishments of his administration and what they mean for Florida.

Financially, Florida is in good shape, as his recommended budget of $99.7 billion has more than $15 billion in reserve, which DeSantis said is one of the largest surpluses in state history. He also noted that Florida’s revenues came in at over $500 million over the last monthly estimate, all with no income tax and the lowest per capita tax burden in the country. Job creation, he added, is exceeding the national average as well, with the labor force increasing six times faster. All this to say: “Freedom works,” DeSantis said.

The governor also placed a great emphasis on what the state has done for children, putting them first in the midst of the pandemic. Even though it was not fashionable, DeSantis said, his administration made it clear that children had to go back to in-person learning in school. While they faced opposition from the “hysterical media” as well as politicians and unions, they proceeded, and “millions of families in Florida are better for it.”  The governor also added that Critical Race Theory (CRT) has no place in the state, emphasizing that tax dollars “should not be used to teach our kids to hate our country or to hate each other.”

The Republican governor also declared Florida a “law and order state” — one of the reasons Americans say they are flocking to the Sunshine State.

“We have stood by the men and women of law enforcement. Not only do we reject defunding law enforcement, we enacted $1,000 bonuses for all police, fire, and EMTs in Florida. I’m asking the Legislature to re-up these bonuses for another year – they deserve it,” he said, assuring all those in Florida that the “state of Florida stands with you.”

“Law and order also means having strong borders,” he continued, blasting the Biden administration’s inability to enforce the border, releasing “hundreds of thousands of illegal aliens to communities across the US, shipping them to Florida at alarming rates, including by sending clandestine flights in the dark of night.”

DeSantis continued on the subject:

As a state we cannot be a party to what is effectively a massive human smuggling operation run by the federal government. Companies who are facilitating the movement of illegal aliens from the southern border to Florida should be held accountable, including by paying restitution to the state for all the costs they are imposing on our communities.

The governor noted he is “also requesting funds so that when the feds dump illegal aliens in Florida, the state can re-route them to states that have sanctuary policies.”

“Florida should not be made to bear the burden of our federal government’s lawless open border policies,” he said to applause.

DeSantis also thrust election integrity to the forefront, reemphasizing that Floridians deserve to participate in elections that are “secure and transparent,” blasting ballot harvesting and attempts to toss voter ID laws.

“Our constitutional rights have been under assault on a number of fronts and Florida has stood tall in defending the rights of its people,” he continued before blasting Big Tech as serving as a “de facto council of censors.” Florida, he said, must continue to pursue protections for its citizens in this area.

“I also recommend that the Legislature strengthen protections for Floridians’ Second Amendment rights–these important rights should not depend on the whims of politicians who reject the existence of those rights,” DeSantis said, also emphasizing the importance of strengthening protections for the right to life “without which the other rights mean little.” 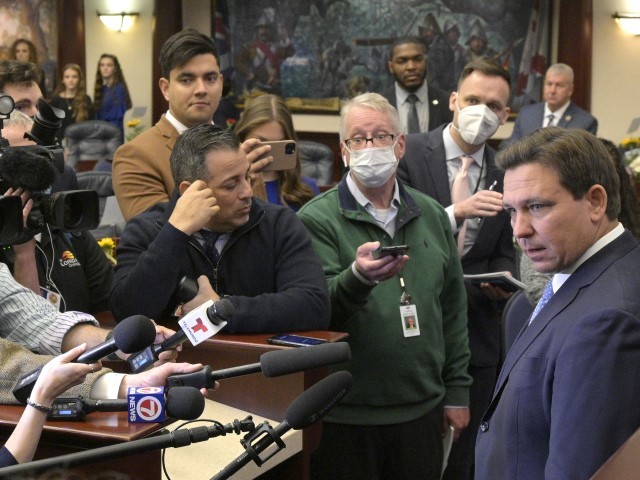 “Protecting life does not end with the unborn – it must also include continued efforts to promote adoption and foster care so that all Floridians have a fair chance in life. Florida has 4,000 more licensed caregivers than in 2019 and I am proposing additional funds for foster parents in next year’s budget,” he said to applause.

DeSantis concluded his speech with a word about the “catastrophic partial collapse at the Champlain Towers South condominium complex,” which occurred last June, calling the loss “devastating and incalculable” and quoting Scripture: “The Lord is close to the brokenhearted; he saves those whose spirits are crushed.”

“We have sixty days to work together to build upon our rock of freedom,” referring to the 60-day legislative session which began Tuesday. “Lost time is never found again. So seize the moment. And be thankful that God has blessed us to live and serve in America’s liberty outpost, the free state of Florida!”