The Global Times, an English-language newspaper operated by the Chinese Communist Party (CCP), wrote an article bragging about President Joe Biden’s reliance on China to implement his coronavirus testing plan.

Biden announced a plan last month to deliver 500 million at-home coronavirus tests to Americans across the country. As of Tuesday, citizens may order tests directly from the U.S. Postal Service, which ships them in 7-12 days.

The Global Times article boasts that Biden’s purchase of tests led to a “bull run” in Andon Health Company’s stock. Andon Health Company is the parent company of its U.S. subsidiary, iHealth Labs, which signed a $1.28 billion deal with the U.S. Department of Health and Human Services to procure the at-home tests.

Andon Health’s stock “soared 49.07 percent over this week,” according to the article. “The contract involved is our subsidiary in the U.S., but our production is in Tianjin in North China,” an Andon Health source told Global Times.

Along with test kits, Chinese manufacturers saw a spike in U.S.-based orders for face masks. “The number of inquiries for orders from the U.S. rose by 30 percent over the past week from the prior week, and the company is running at full capacity with its employees working extra shifts to meet clients’ needs,” a mask manufacturer said. 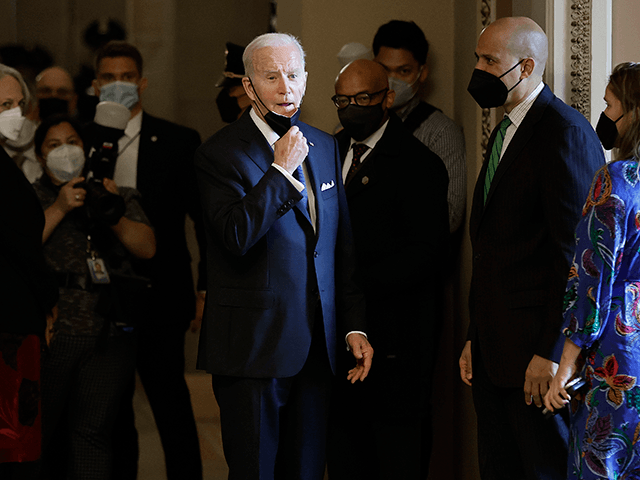 President Joe Biden pulls down his mask to answer a reporter’s question after paying respects to former Senate Majority Leader Harry Reid as he lies in state in the U.S. Capitol on January 12, 2022, in Washington, DC. (Photo by Chip Somodevilla/Getty Images)

Last week, Members of the U.S. House of Representatives were given KN95 masks that read “made in China” before entering the House floor. The masks were also distributed to representatives’ offices after the House physician mandated lawmakers wear N95 or KN95 masks.

“We are fighting a virus that came from China, yet the Speaker is comfortable with publicly supporting a Chinese manufacturer, sending our taxpayer dollars overseas and further advertising our dependency on China,” Rep. Greg Murphy (R-NC) said.