Rep. Lee Zeldin (R-NY) has raised $8.4 million in the race to become the next governor of New York, the most taken in by any Republican in a NY statewide election in a non-election year in over two decades.

In an announcement on Tuesday, Zeldin said the $8.4 million total came from nearly 34,000 donations.

“This marks the most a republican candidate for statewide office in New York has raised in a non-election year in two decades,” the announcement said. ” Congressman Zeldin reported over $4.3 million in receipts from over 21,000 donations, 90% of which are $100 or less, and over $5.6 million cash on hand.”

“Since announcing his candidacy for governor, congressman seldom has received nearly 34,000 donations,” it added.

Zeldin called the upcoming election a “last stand” for the people of New York to take their state back.

Since announcing our campaign for governor, the massive outpouring of grassroots support from every corner of our state has only grown stronger. New Yorkers from every walk of life are fed up with one-party rule, with the attacks on their freedoms, their wallets, their safety and their kids’ education, and they’re taking action.

This is last stand time. In 2022, we must save our states, and it’s clear New Yorkers know it’s going to take a new generation of leadership to get the job done. I’m all in, and as seen once again in our latest fundraising report, tens of thousands of donors, volunteers, and other passionate, dedicated supporters from across New York are all in too.

🚨JUST RELEASED: Since launching our campaign for Governor, we have brought in $8.4 Million from nearly 34,000 donations. So grateful for the tens of thousands of grassroots donors, volunteers, & other supporters who signed up for this campaign to fire Hochul & Save Our State! pic.twitter.com/yDqG7f9mpJ

Former governor George Pataki is the last Republican to hold statewide office in New York. He served from 1995 to 2006. 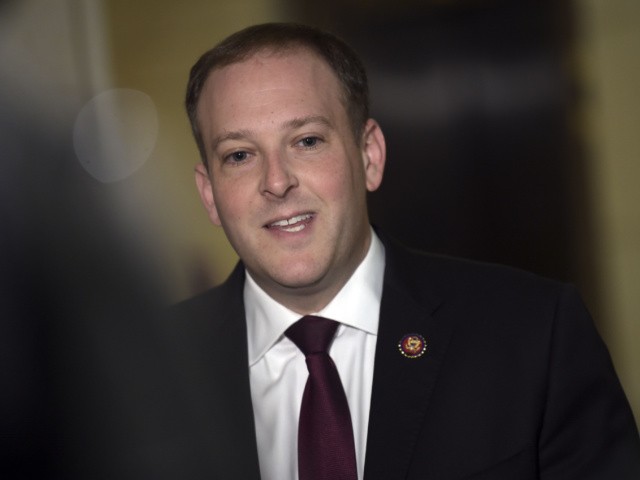 U.S Rep. Lee Zeldin (R- NY) speaks to reporters during a closed-door congressional meeting by former aide Fiona Hill, before members of the House of Representatives, on Capitol Hill October 14, 2019 in Washington,DC. (ERIC BARADAT/AFP via Getty)

According to the New York Post, she has already raised $12 million for her reelection campaign.

“Since announcing her campaign for a full term in August, Hochul, who became governor after Andrew Cuomo resigned, has raised $12 million with $11.1 million in cash on hand as of November,” reported the Post.