The Republican National Committee (RNC) is ramping up Republican presence at the polls this year by enlisting thousands of poll workers ahead of the midterms, an operation it legally could not run for nearly 40 years prior to 2018.

The committee is using this week specifically — the week of “Poll Worker Recruitment Day,” which officially took place Tuesday — to capitalize on its millions of Republican contacts by pushing out directives for people to become involved at the polls as both watchers and official workers.

“If elections are the cornerstone of democracy, then transparent and secure elections are one of the most important offerings that the RNC can have,” RNC spokeswoman Danielle Alvarez told Breitbart News. “And it happens to be the first cycle that we can get involved and stand up this operation the way that RNC chairwoman [Ronna] McDaniel has envisioned.”

The RNC is the primary campaign arm of the Republican Party and poured more than $800 million into electing Republican candidates in the last election cycle.

The committee however, unlike the Democratic National Committee (DNC), was prohibited under a 1982 consent decree from engaging in certain aspects of the election process — such as recruiting its own people to monitor polls on Election Day — up through December 2017, when the decree expired.

The consent decree was the result of a settlement with the DNC after the DNC sued its Republican counterpart for allegedly intimidating voters in predominantly Democrat areas of New Jersey during the state’s ultra-tight 1981 gubernatorial contest, as reported at the time by the Herald-News.

In a 2020 op-ed in the Washington Post, McDaniel detailed the numerous longstanding limitations the consent decree had placed on her organization and wrote of its newfound freedom that “the playing field” was “level again.”

“Democrats are deploying an ‘army of poll watchers’ this November, and for the first time in decades the Republican Party can too,” McDaniel wrote in August 2020.

It previously worked under the umbrella of the Trump campaign. “What you’ll see in 2022 is fully housed under the RNC,” Alvarez explained.

Alvarez said, “There’s, especially this cycle, just so much interest in this process because our base is so fired up about what happened in 2020 that folks want to participate and not only be poll watchers, but step in and be poll workers and make sure that, you know, they’re behind the scenes.”

This year, the RNC is taking what it described to Breitbart News as a “three-pronged” approach to elections: litigation, on-the-ground work, and communications.

The 2021 off-year elections served as a trial run of sorts for the revamped process with there being minimal election activity happening outside of New Jersey and Virginia. 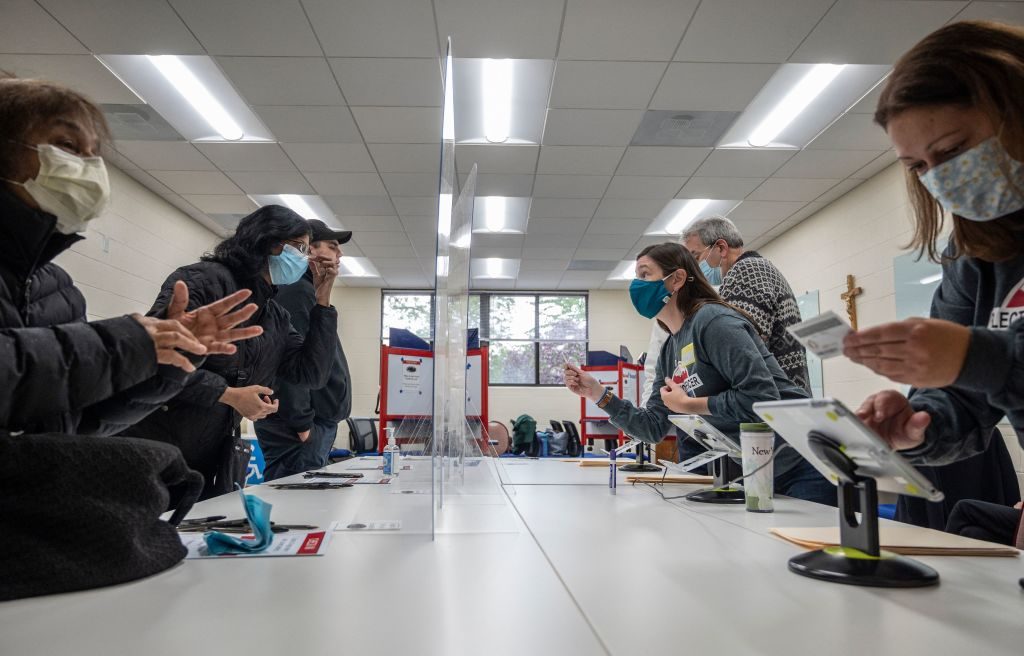 Voters register for a ballot at a church being used as a polling station on Election Day in Arlington, Virginia, on November 2, 2021. (ANDREW CABALLERO-REYNOLDS/AFP via Getty Images)

For the highly competitive Virginia governor’s race, Alvarez said almost every available poll watching position permissible by state and local law had been filled. The watchers connected with the RNC were able to observe and report in real time any issues to the RNC, such as voters reportedly being turned away for not wearing masks, and then lawyers on hand could coordinate with the RNC communications team to quickly resolve those issues.

In comments to Fox News after the Virginia election, McDaniel also said her staff on the ground there “found 100,000 unexpected voters” in a race that came down to roughly 63,000 votes.

Alvarez said that kind of “seamless process” is critical in close races and that the committee is aiming to repeat it on a far larger scale this year for the midterm elections happening across the country.

In Wisconsin, a key battleground state with a toss-up gubernatorial and U.S. Senate race on the line in November, RNC Political Director Elliott Echols told Breitbart News that his organization recruited nearly 4,500 people to work as poll workers following a 2021 end-of-year recruitment push. That achievement is significant in the Badger State where poll workers, also known as “election inspectors,” serve two-year terms.

Echols estimated that at the start of this week, as a result of another round of RNC recruiting, 5,000 individuals had signed up for poll working across about 17 battleground states.

The committee has centralized its recruitment activities on its website gopvictory.com, where it is now promoting location-based signup options for poll work, trainings, and volunteering.