Republican candidate Herschel Walker is narrowly beating incumbent Sen. Raphael Warnock (D-GA) by 3.5 points in the race for U.S. Senate in Georgia, according to a new poll.

The poll, published Thursday by the Atlanta Journal-Constitution, found Walker with 47.1 percent support and Warnock with 43.6 percent in a hypothetical general election matchup. 7.8 percent of respondents said they did not know which candidate they would vote for.

The poll’s margin of error is +/- 3.3 percent, meaning that the 3.5 percent difference between Walker and Warnock pits them in a statistical tie.

Walker, a former University of Georgia football star and former NFL player, announced his bid for office in August 2021 and shot to the top of the primary field quickly thereafter. Walker had already been publicly backed by former President Donald Trump and was somewhat of a Georgia household name because of his athletic history before he decided to launch his Senate campaign.

Black, who is currently in a distant second place to Walker, was also tested against Warnock in the AJC poll and trailed Warnock by 5.3 points in a hypothetical general election matchup, 40.7 percent to 46 percent. 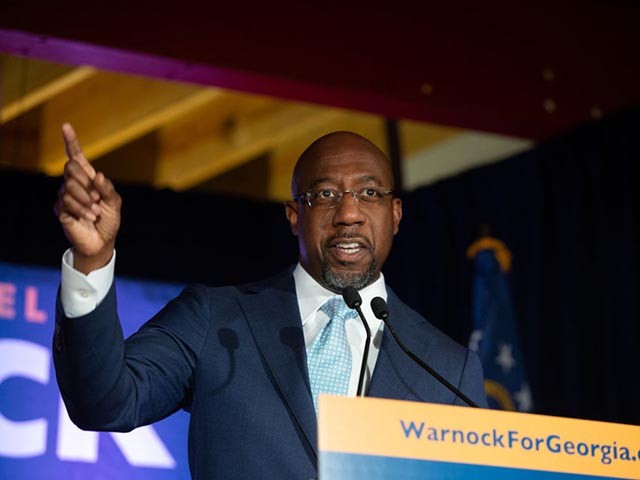 Both Walker and Warnock are black Americans, but Warnock, senior pastor of the historic Ebenezer Baptist Church in Atlanta, has a lengthy history of spreading racially charged messages through his speeches, sermons, and writings.

While the AJC poll found Walker with a slim lead over Warnock, a Quinnipiac University poll published Wednesday had the two candidates in an even tighter race, just one point apart, with Walker at 49 percent and Warnock at 48 percent. Two percent of respondents said they were undecided in that poll.

The polls’ top-line results suggest the race is poised to become highly competitive, and based on current fundraising numbers, it is also set to be one of the most expensive Senate battles of the midterms.

Newly released fundraising numbers show both candidates raked in millions in the last quarter of 2021, per the Associated Press, but Warnock outpaced Walker, raising $9.8 million compared to Walker’s $5.4 million.

The AJC poll was conducted by the University of Georgia’s School of Public and International Affairs from January 13 to 24 among 872 registered voters.