Sen. Ron Johnson (R-WI) has slammed the Department of Defense for ignoring his letters regarding a military health database that allegedly showed an increase in troop illnesses after the Biden administration’s military vaccine mandate began in August, detailing his concerns in a letter exclusively obtained Wednesday by Breitbart News.

Attorney Thomas Renz, who is representing three DoD whistle blowers, presented findings from the database during a January 24 roundtable hosted by Johnson that showed a spike in the average number of troops diagnosed with miscarriages, myocarditis, cancer, and other serious illnesses from the period 2016-2020 compared to 2021.

Johnson said in his latest missive that rather than respond to him, the DoD has issued a statement to PolitiFact calling the data in the database “incorrect.” Johnson wrote:

I was disappointed to see that instead of immediately responding to the American people through their elected representative, DoD apparently decided to prioritize a response to PolitiFact about allegations relating to the same database.

In addition to responding to PolitiFact before responding to a U.S. Senator, DoD also made a concerning statement about its current handling of DMED records. DoD’s spokesperson reportedly said that the DMED system is now offline to ‘identify and correct the root-cause of the data corruption.’

Let me be clear, any attempt to alter data contained within DMED without preserving all records before and after these changes are made to the database will completely undermine my preservation request and will be considered an active effort to mislead Congress.

Johnson demanded an immediate response from DoD to his latest letter no later than Thursday, February 10.

The DoD has meanwhile pushed back against the claims there was an increase in illnesses. Defense officials say data in the DMED database was incorrect for the years 2016-2020 and the data was up to date for 2021, making it appear that there was a jump in diagnoses.

Members of the U.S. military are expressing their grave concerns as the Pentagon issues a coronavirus vaccine mandate. https://t.co/Vvc3xQV3j8

A DoD spokesman, Army Maj. Charlie Dietz, said in a statement to Breitbart News on Tuesday:

In response to concerns mentioned in new reports, [the Defense Health Agency’s] Armed Forces Health Surveillance Division (AFHSD) conducted a complete review of the data contained in the Defense Medical Epidemiology Database (DMED) and found that the data was incorrect for the years 2016-2020. DMED is a web-based tool to query de-identified active component personnel and medical event data contained within the Defense Medical Surveillance System (DMSS).

Dietz on Wednesday said in a statement that “access to the DMED database was restored on Sunday, January 30th, 2022, after the data was corrected. Also data was backed up to meet record preservation request.”

Renz has accused the DoD of a “cover-up.” On his website, he posted graphics showing the alleged new DOD data, and writing:

To believe these brand-new DOD numbers you have to believe that the DOD under-reported all cases on this military database by around 20 million per year, for 5 years. They, the DOD, are now claiming that they have been underreporting cases by 1000% for 5 years… . Yes, my friends, this is what a cover-up looks like.

The Washington Post in September 2021 profiled Renz, casting doubt on his credibility and describing him as an inexperienced lawyer who recently rose to prominence by challenging lockdowns and vaccine mandates. 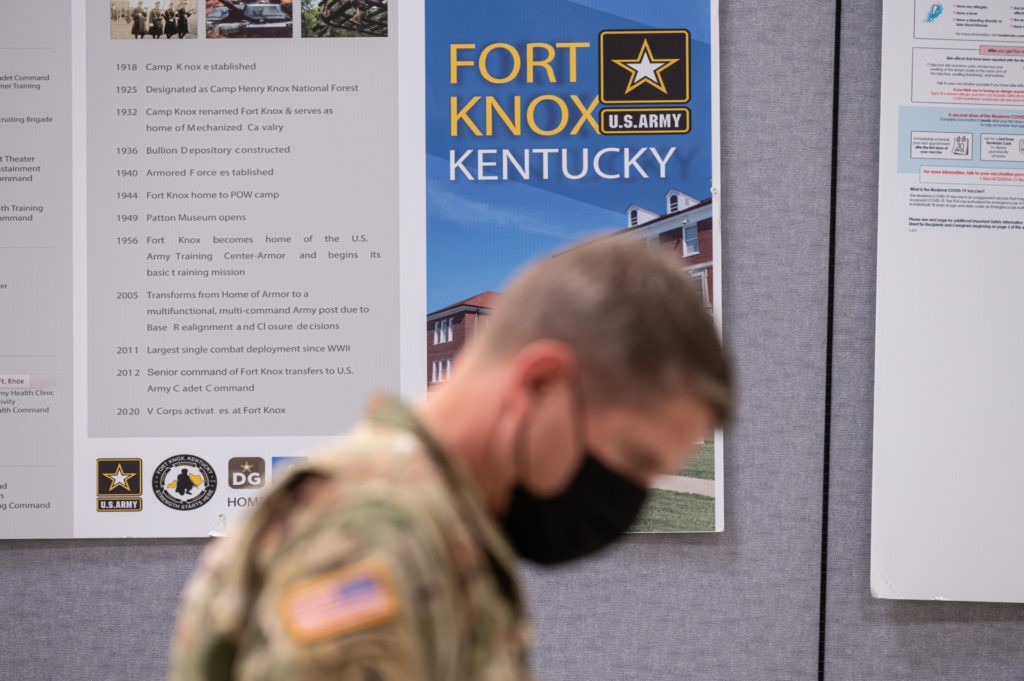 A  soldier fills out his COVID-19 vaccine registration forms on September 9, 2021 in Fort Knox, Kentucky. The Pentagon, with the support of military leaders and U.S. President Joe Biden, mandated COVID-19 vaccination for all military service members in early September. (Jon Cherry/Getty Images)