More than half of Democrats want their party to nominate someone other than President Joe Biden in 2024, according to a CNN poll released on Sunday.

The survey, which was conducted by SSRS in January and February with 1,527 adults, found that only 45 percent of Democrats and Democrat-leaning voters want Biden to run for reelection. More than half — 51 percent — want someone else in the Oval Office. The margin of sampling error is ± 3.3 percentage points.

Biden’s strongest supporters are unsurprisingly in favor of his reelection, though the percentage decreases significantly among Democrats who only moderately approve of him.

“While 70 percent of Democratic voters who strongly approve of the way he’s handling the job said they’d like to see him renominated, that drops to just 35 percent among Democrats who said they approve moderately,” according to the CNN report.

Democrats’ dwindling support for Biden in the next presidential election “stems more from electability and other concerns,” the outlet found. Out of Democrat voters who said they want to see Biden replaced, 35 percent said it was because they “doubted Biden’s ability to win against a Republican candidate.” Thirty-one percent simply said it was “because they didn’t want him to be reelected,” and 18 percent are concerned about Biden’s age (he is turning 82 years old in November 2024). 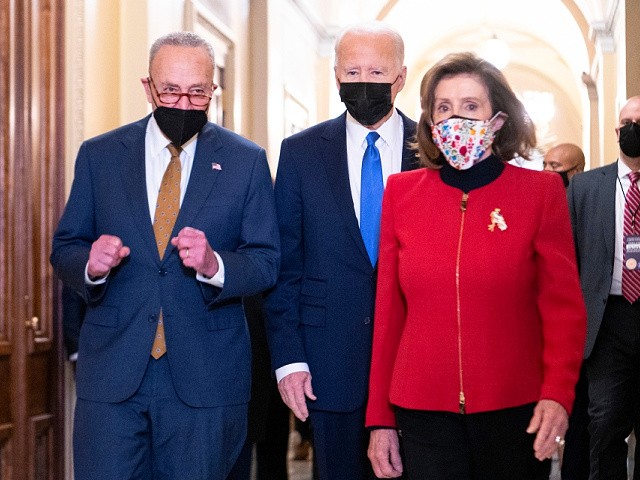 U.S. President Joe Biden, with Speaker of the House Nancy Pelosi and Senate Majority Leader Chuck Schumer, arrives at the U.S. Capitol on January 6, 2022, to mark the anniversary of the attack on the Capitol in Washington, DC. (Photo by BILL CLARK/POOL/AFP via Getty Images)

Democrats polled largely did not have a specific candidate in mind to replace Biden.

“Only 12 percent of all Democratic and Democratic-leaning voters wanted to see a nominee who isn’t Biden and had a specific alternative in mind. No individual candidate was named by more than 5 percent of those who didn’t want Biden atop the ticket,” the report states.

On the GOP side, 50 percent of Republican and Republican-leaning voters are “evenly split,” with 50 percent wanting former President Donald Trump to run in 2024 and 49 percent hoping for another option.

When asked for their reasoning, 39 percent of Republicans specifically said they do not want him to be president again. Twenty-two percent said, “they doubted Trump could win against the Democrats,” nine percent want a “fresher candidate,” or someone “less polarizing” (seven percent). Six percent had concerns about “Trump’s personality.”

More Republican-aligned voters had a “preferred alternative” to Trump lined up at 19 percent, while 29 percent said, “just someone besides Trump.” Among the alternatives, Florida Gov. Ron DeSantis was the most preferred at 21 percent. No other potential candidate garnered above one percent.

“The numbers for both Biden and Trump look tepid compared with past poll results on a similar question. In March 2010, nearly 8 in 10 Democratic and Democratic-leaning voters said they wanted the party to renominate Barack Obama (79 percent),” CNN reported. “And in March 2018, Republican and Republican-leaning voters were solidly behind Trump’s renomination (77 percent).”