The poll, conducted by Fox News from March 2 to 6, found Kemp up 11 points over Perdue, garnering 50 percent support compared to Perdue’s 39 percent support. An additional ten percent of respondents said they supported another candidate or were unsure of whom to choose.

The poll was taken just after another poll, conducted by Fox 5 Atlanta/InsiderAdvantage from February 28 to March 1, found similar results, showing Kemp up nine points. Other polls from January and February also give Kemp a roughly ten-point advantage over Perdue in the race, which which will take place on May 24.

The gubernatorial primary has captured national attention in large part because former President Donald Trump has been outspoken about his desire to unseat Kemp, with Trump expressing disapproval of Georgia’s 2020 election process.

Trump was quick to endorse Perdue when he entered the race in December and sought to strengthen Perdue’s position in the race by urging former state Rep. Vernon Jones, a longtime Democrat who converted to Republican in January 2021, to drop out of the gubernatorial primary and instead compete in a congressional race. Jones did so on February 7 and received Trump’s endorsement for his congressional bid immediately thereafter.

The Fox poll measured respondents’ opinions of Trump and found that a majority, or 79 percent, view Trump favorably, with 57 percent strongly favoring him and 22 percent somewhat favoring him.

Those results suggest Perdue could close the existing gap in polling support as he continues to promote that he is backed by the former president, and as Trump and his surrogates push for a Perdue victory. That effort from Trump world is firmly underway as indicated by a pair of rallies Donald Trump Jr. held on behalf of Perdue in the Peach State on Monday. 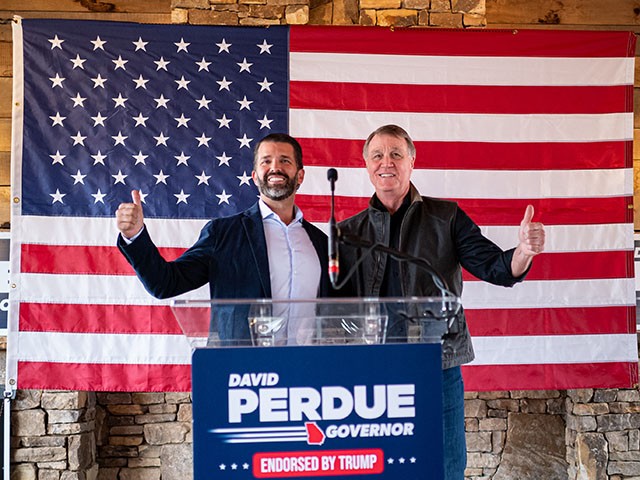 Kemp, for his part, has celebrated the continued polling success. His campaign said in a statement Wednesday morning:

This poll reflects what we have been seeing on the trail the last few months: Georgia conservatives are backing Governor Kemp’s record of keeping Georgia open for business, signing the No. 1 ranked election integrity law in the country, backing law enforcement and public safety, and putting hardworking Georgians first.

The poll was conducted by telephone among 914 respondents (Georgia Republican primary voters) and had a margin of error of +/- three percent.