President Joe Biden accused “folks on television” of fueling and profiting from racist hate in America in a pair of speeches Tuesday.

“You have folks on television stations talking about the replacement theory, scaring the living hell out of people who don’t have a whole lot of emotional stability,” Biden said and added, “taking advantage of, on the internet and other means, talking about how we’re going to be overtaken.”

Biden commented on television hosts during a reception at the White House celebrating Asian-American Heritage Month.

“I’ll be darned — as long as I’m president of the United States, I’m going to fight like hell and we’re going to expose everybody,” he vowed.

He escalated his rhetoric from a speech earlier in the day in Buffalo mourning the loss of ten people who died in a mass shooting. 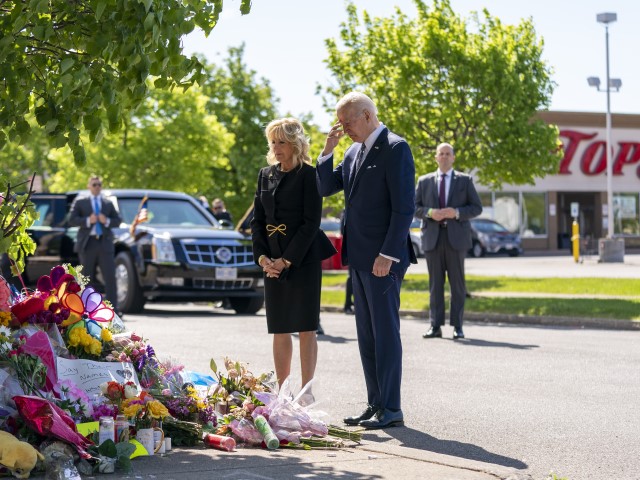 President Joe Biden and first lady Jill Biden visit the scene of a shooting at a supermarket to pay respects and speak to families of the victims of Saturday’s shooting in Buffalo, N.Y., Tuesday, May 17, 2022. (Andrew Harnik/AP)

“It’s not just the wackos who go out there with those guns and get talked into doing something. It’s the people who fill their brains with false ideas,” Biden said.

The president accused television hosts and political figures of trying to profit and benefit politically from racism.

“It’s the people who make them, convince them, for their power, and their prestige, and their money, to be able to go out and do these terrible things,” he said. “That’s not who we are.”

Biden was asked about Carlson and Republicans directly by reporters on Tuesday as he left Buffalo.

“I believe anybody who echoes a replacement [theory] is to blame — not for this particular crime,” he said. “But it serves no purpose — no purpose except for profit and/or political benefit. And it’s wrong. It’s just simply wrong.”