A recent Supreme Court ruling defending a football coach’s right to pray on the field after games is “not about freedom” but about “coercion,” according to a recent piece in the Nation. The article claims the decision ignores the freedom of students “to not pray,” while lamenting that a “white Christian” taking a knee in the name of “freedom of religion” is considered a “hero” while a teen protesting “police getting away with murder” is told to “shut up” and play.

The Monday essay titled, “A Football Coach’s Prayer Is Not About Freedom. It’s About Coercion,” and penned by the magazine’s sports editor Dave Zirin, calls the Supreme Court decision to allow a football coach to “become a dictator-priest,” one “riddled with lies.”

I wrote this @thenation. Pass it on. "A Football Coach’s Prayer Is Not About Freedom. It’s About Coercion." https://t.co/pAAYDxc1OT

The piece begins by declaring this “the season of coercion” for the Supreme Court’s “illegitimate majority,” highlighting the Court’s recent ruling on abortion.

“While forcing pregnant people to either die on the operating table, engage in illegal abortions, or give birth has rightly garnered most of the coverage, our ruling clerics issued another celebration of coercion on Monday,” Zirin writes.

Pointing to the Kennedy vs. Bremerton School District case that involved Coach Joseph Kennedy’s right to pray in the school’s locker room before kickoff and on the field following games, Zirin lamented that “in a 6-3 ruling—the only vote that seems to matter any longer—they ruled that a football coach could lead his team in prayer at a public school.”

He then calls the majority decision, “more than a dismissive wave of the hand at the right of children to be free from religion” and “filled with falsehoods,” claiming Kennedy’s prayers were not quiet, with him having “insisted on taking it to midfield, about as public a place as possible.”

“He was seemingly daring the district to do something,” Zirin charges, adding that Kennedy can be expected “to appear soon on the right-wing gravy-train lecture circuit along with those idiots who waved guns at the Black Lives Matter protesters.”

Nor did the coach lose his job, he writes, despite the decision indicating so.

“No one was fired for praying,” Zirin writes. “He was put on paid leave after repeated refusal to listen to the school’s administration and then declined to reapply for his job.”

“But when you are a talk radio hack in a black robe, you write what your audience wants to hear,” he added.

Zirin, who authored The Kaepernick Effect: Taking a Knee, Changing the World, went on to allege that the “greater issue” with the decision is that the majority, “in their zeal,” chose to ignore “the freedom of the students to not pray.”

He then calls the justification that “no one has to pray if they choose not to,” a “risible” perspective.

“Anyone who has ever played high school sports knows that if your coach is doing something, particularly something religious, and expects you to join, then you had better do it,” Zirin says, adding that any opposition from a team member would be labeled a “distraction” or “locker-room cancer” or perhaps something worse.

In such a scenario, the coach — “particularly if they are a malignant narcissist” — will likely make players “pay a price with the greatest power they have” over them, that being “playing time,” according to Zirin.

“It’s also about making you an outcast among your teammates, a prospect in your teen years about as painful and harmful as not being able to play a sport you love,” he writes. “It’s easier to just take a knee for a minute rather than reap the whirlwind of anger from your coach.”

“That is why this is not about freedom but coercion,” he adds. 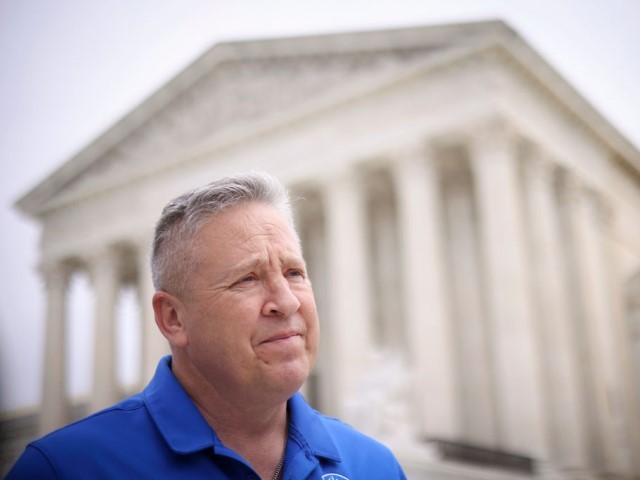 In reference to high school athletes, who he says were “harassed and hounded by their coaches for taking a knee during the national anthem in protest of racial inequity and police violence,” Zirin claimed that in America “taking a knee is currently a separate but unequal enterprise.”

“If you are a white Christian and do it in the name of freedom of religion, you are a hero to powerful people who rush to your defense and gleefully shred settled law in the process,” he writes.

However, he concludes, “if you are a 16-year-old kid tired of seeing dead bodies in the streets and the police getting away with murder, your only right is to shut up and play or bear the consequences.”

On Monday, the Supreme Court sided 6-3 with high school football coach Joseph Kennedy who was fired for praying on the field after games.

Kennedy, a devout Christian who began working at Bremerton High School in 2008, was fired from his role as varsity assistant coach and as the junior varsity head coach after he refused to quit praying on the 50-yard line in full view of the public following games.

Kennedy asserted that the school district violated the Free Speech and Free Exercise Clauses of the First Amendment of the U.S. Constitution.

The district also used the First Amendment to justify its argument, claiming that Kennedy’s prayers in view of the public and students following a school-sanctioned event violate the Establishment Clause because his actions could be perceived as a district endorsement of religion.

Justice Neil Gorsuch delivered the majority opinion, ruling that the Bremerton School District violated the Free Exercise Clause and the Free Speech Clause of the First Amendment by firing coach Joseph Kennedy for praying after games.

Gorsuch further ruled that the district failed to prove that Kennedy violated the Establishment Clause and overruled the “Lemon test,” a measure of government coercion of religion, which some justices have previously called outdated and misused.

“Respect for religious expressions is indispensable to life in a free and diverse Republic—whether those expressions take place in a sanctuary or on a field, and whether they manifest through the spoken word or a bowed head,” Gorsuch wrote.

“Here, a government entity sought to punish an individual for engaging in a brief, quiet, personal religious observance doubly protected by the Free Exercise and Free Speech Clauses of the First Amendment,” he continued.

Together, we WON for Coach Kennedy at the Supreme Court! Stay tuned as we unfold the victory! pic.twitter.com/HavmkzzexX

First Liberty Institute, which represented Coach Kennedy, called the decision a “tremendous victory” for Kennedy, “and religious liberty for all Americans.”