Former Gov. Eric Greitens (R-MO), the leading U.S. Senate Candidate in the Missouri Republican primary, exclusively told Breitbart News that it does not “matter how many establishment figures we have running against us; we’ll beat ’em.”

Greitens spoke with Breitbart News in a phone interview Thursday and was asked about Attorney John Wood – a former senior counsel to the House January 6 Committee recruited by Vice Chair Rep. Liz Cheney (R-WY) and Chairman Rep. Bennie Thompson (D-MS) – who announced his candidacy as an independent in the U.S. Senate contest in Missouri this week. His Senate bid comes days after leaving his position as committee counsel, and Greitens said he views the race as his campaign and the “America First movement” versus the January 6 Committee and the “political establishment” in Missouri.

“This has always been Eric Greitens and the MAGA movement, Eric Greitens and the America First movement against the political establishment, and I think that it is really telling that the political establishment in Missouri thinks that people in Missouri are going to be excited by one of Liz Cheney’s accomplices,” Greitens said. “This guy and the whole January 6 Committee, everyone in Missouri sees it for what it is. It is a distraction from Joe Biden’s failures, it’s an opportunity to attack President Trump’s allies, and it’s also another opportunity for the mainstream media, the left, and RINOs to lie about President Trump. So everybody’s seeing through that, and one of the reasons why we’re winning this race is because we have the energy of the MAGA movement with us.”

When asked more broadly about the January 6 Committee, he emphasized that “at this point, everyone sees the game.”

“I think that the two conclusions that you can draw are, number one, President Trump is incredibly strong, and, number two, that’s why they continue to lie about him. President Trump remains the dominant force in American politics. He is the dominant force in the Republican Party, and that’s why you have RINOs like Liz Cheney and Adam Kinzinger bringing people in to lie about President Trump,” Greteins stated. “At this point, everyone sees the game. The left comes in, and they push false attacks. The mainstream media picks up those lies, and then RINOs jump in to push the lies with the mainstream media and the left. We saw this playbook with the Trump-Russia collusion hoax. We saw it with the false attacks against Brett Kavanaugh. We saw it with what they did to General Flynn. We see over and over again this playbook, and it’s why people in Missouri and around the country no longer trust the mainstream media. They have lied so many times about so much that at this point, if the mainstream media is saying it, there’s a very good chance that it’s not true.”

The Republican political establishment has targeted the America First candidate and his campaign as the former governor has consistently vowed to vote against Sen. Mitch McConnell (R-KY) in a bid for Senate majority leader, should he win the primary and general election in addition to the GOP taking a Senate majority. A tongue-in-cheek campaign ad, released by Greitens’ campaign, which metaphorically talks about “hunting RINOs” or Republicans in Name Only, caused an uproar amongst the establishment conservatives and the left. Greitens has also launched a “No MO RINOs” statewide tour, bringing in large crowds that his campaign manager, Dylan Johnson, says only he could draw.

Wood’s candidacy follows both Greitens’ ad and statewide tour and seems to be the latest effort of the political establishment to stop the Republican frontrunner. 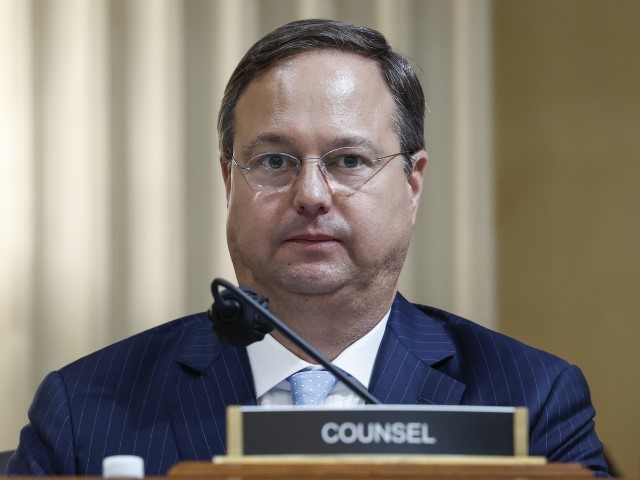 Senior investigative counsel John Wood questions witnesses during the third hearing by the House Select Committee to investigate the January 6th Attack on the U.S. Capitol in the Cannon House Office Building on June 16, 2022, in Washington, DC (Anna Moneymaker/Getty Images).

One attack on Greitens’ campaign is being led by a group called Show Me Values, which Republican donors in Missouri, including Rex Sinquefield, are funding, as Politico reported. As the America First candidate previously noted, Sinquefield is one “of McConnell’s biggest donors.” A central argument among “RINO” adversaries in Missouri has been that Greitens would not prevail against a Democrat in the general election, but a FiveThirtyEight report released Thursday shows the former governor is “clearly favored to win Missouri’s Senate election.” A model, which simulated a potential matchup between Greitens and FiveThirtyEight’s projected Democrat nominee, Lucas Kunce, 40,000 times, shows the America First candidate has a 94 percent chance to win the general election matchup:

Mitch McConnell & his allies are spending millions against pro-Trump @EricGreitens. As you can see below, it’s having no success.

Eric is winning BIG in every Primary & General Election poll because the voters of Missouri know that he’s the REAL #AmericaFirst candidate 🇺🇸#MAGA https://t.co/CuUP5VdL9c

Greitens has consistently been atop the polls over his primary opponents, Rep.Vicky Hartzler (R-MO) and Missouri Attorney General Steve Schmitt, among other candidates, throughout the race.