President Joe Biden suggested on Tuesday it is “not rational” to return economic migrants to their homes in the autocratic states of Cuba, Nicaragua, and Venezuela.

“Fewer immigrants [are] coming from Central America and from Mexico,” Biden told reporters when he was asked about the huge migration on Friday. He added:

This is a totally different circumstance [from prior years]. What’s on my watch now is Venezuela, Cuba, and Nicaragua.  And the ability to send them [the migrants] back to those states is not rational.

However, Biden’s migration is unfairly pressuring down Americans’ wages. It is also boosting rents and housing prices, and pushing up inflation for a wide variety of goods, such as used autos and food.

Biden’s opposition to deportation is also giving the GOP an advantage in the midterm elections. Biden’s migration is giving voters rational pocketbook reasons to vote for the GOP in the House and even the Senate. Those rational votes could sink the agendas pushed by other advocacy groups within the Democratic Party.

So far, GOP leaders are moving slowly to make a pocketbook case against migration in the 2022 election, amid strong pressure from donors who do not want the public to view migration as an economic issue. 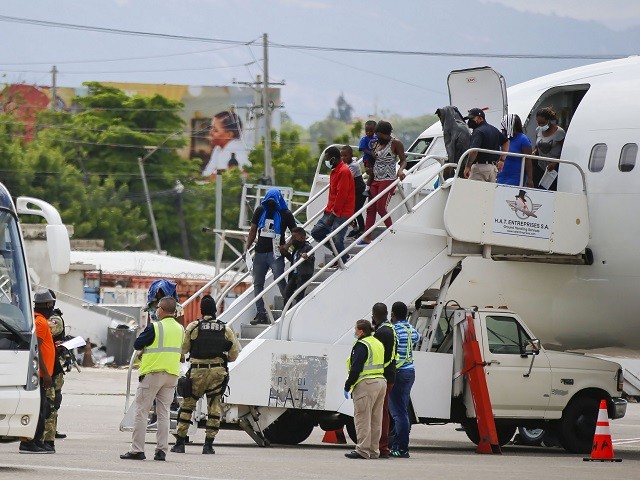 Biden’s non-enforcement policy may also be illegal. Congress passed its popular border laws to bar economic migrants from taking jobs that would otherwise be upgraded and given to better-paid Americans. However, Biden’s border policy may soon be vetoed by the Supreme Court, which is responsible for ensuring that Congress’ laws are implemented and enforced by the administration.

Since 2021, Biden has accepted an inflow of almost 2 million southern migrants from many countries around the world.

In August, Biden’s welcome attracted more migrants from distant countries than he did from Mexico, and three countries in Central America, Honduras, El Salvador, and Guatemala.

It's stunning that these two lines crossed last month.

Mexico and the three Central American countries have already exported millions of their young people to serve U.S. businesses as workers, consumers, and renters.

Biden’s deputies also insist that the migrants from those countries are political refugees fleeing communist states.

“We should not be using people, migrants who are fleeing communism, as a political pawn,” Biden’s spokeswoman said Friday about the transfer of migrants to Martha’s Vinyard.

“Failing communist regimes in Venezuela, Nicaragua, and Cuba are driving a new wave of migration across the Western Hemisphere, including the recent increase in encounters at the southwest U.S. border,” Customs and Border Protection Commissioner Chris Magnus, said in a Friday statement. “Those fleeing repressive regimes pose significant challenges for [deportations],” he said.

The migrants, however, say they are coming to the United States for economic reasons.

“I am a welder, and I am looking for work here,” Venezuelan refugee Adrian Medina told the New York Post on September 21.

And Biden’s policy of accepting unhappy migrants from those countries strengthens the autocracies’ unpopular governments.

“De facto, the U.S. government is helping the regime in Havana get rid of its discontented [young] population by taking them in,” said Mark Krikorian, the director of the Center for Immigration Studies, adding:

That was the case with Mexico. The reason political reform in Mexico took so long is that the grassroots discontent was able to just move to Chicago and get a landscaping job. I don’t mean dissidents —  I mean the ordinary folks who would have demanded better lives in their local town or village. They were able to just leave [via immigration].

We’re seeing that in an even more stark sense in Cuba … They use us as the bogeyman, and by us taking everybody who’s discontented with the regime, we end up helping them.

Venezuela is an autocracy, but nearly all of the Venezuelan migrants had already emigrated to other South American countries, Krikorian said:

Almost all the people [migrating] here left Venezuals many years ago. They were living in Colombia and Peru and decided to take Biden up on his invitation to come to the United States …They’re just joining the crowd, heading to the border, because of Joe Biden’s invitation.

Moreover, autocracies gain short-term economic benefits from the remittances sent home by migrants. The gain is even larger because Biden’s welcome means the migrants can work in the United States instead of in Mexico, Brazil, or Chile.

Biden’s claim to be rescuing migrants from autocracy is also undercut by the reality that the governments are eager to send those migrants to the United States. For example, most Cuban migrants fly from the island to Nicaragua, where they are released by the Nicaraguan government to head north to Texas. Also, Breitbart News reported on September 18 that Venezuela’s government is releasing prisoners so they can migrate to Biden’s welcome.

Rep. Matt Gaetz confronted Biden DHS chief Mayorkas about the 1.2 million illegal aliens living freely in America who have been ordered deported. "You actually don’t want to remove them.” https://t.co/bWkwepf7kr

Biden’s emphasis on autocracy was also undercut by the news that his deputies are negotiating with Cuba’s government for the transfer of more migrants to the United States. On Tuesday, his national security advisor, Jake Sullivan told reporters:

We’ve actually had a series of discussions with the Cuban government about getting visas restarted, which has been previously announced — that the United States is providing a significant number of visas for Cubans to be able to come directly from Cuba to the United States and not make the harrowing journey. And we will continue to engage with them on the question of migration.

Moreover, the U.S. extraction of young people from those countries damages their long-term development, regardless of democracy and short-term aid for the government, say critics.

“Our immigration policy has had negative effects on various countries in different ways for years and years,” said Rosemary Jenks, director of government relations for NumbersUSA. “By bringing all of the motivated and educated and resourced people from a very poor country to the United States, that harms that [poor sending] country,” she told Breitbart News in April.

That damage of Extraction Migration was illustrated by Darinel Perez, a 31-year-old Cuban medic who was interviewed by Reuters in Tapachula, Mexico. I had to sell my house, everything I had,” she said. “Leaving Cuba was very hard.”

Biden’s officials claim they have to accept migrants from those countries because their governments will not accept deported migrants. However, Biden has not shown any willingness to pressure those countries to accept the return of their migrants.

A convicted Afghan rapist deported by former President Donald Trump’s administration was reportedly brought back to the United States thanks to President Joe Biden’s massive resettlement operation out of Afghanistan. https://t.co/za6qy9yLQF

I would make a larger point here, which is that I think the American people need to understand that a significant part of the reason why we’re seeing an increase in the number of people who are coming to America’s southwestern border is because people are fleeing three repressive dictatorships: Cuba, Venezuela, and Nicaragua. And citizens in those three countries are struggling under the weight and yoke of the repressive governments of those three countries, and they are trying to get out.

And that’s what makes it so challenging for someone who works in the national security space to see anyone from one of those three countries — from Venezuela or Cuba or Nicaragua — be treated as some kind of pawn, because these are people who are trying to escape brutal dictatorships.

Now, from the U.S.’s perspective, we will step up to our responsibility to help the citizens of those three countries, but we also believe that this is a region-wide responsibility.

So what you will see in the coming weeks is an enormous amount of intensive diplomacy as we work with all of the countries of the region to do their part to help deal with the migration issues coming out of Cuba or Nicaragua and Venezuela in particular.