Republicans will start every day in the new Congress with a prayer and the Pledge of Allegiance, GOP leader Rep. Kevin McCarthy (R-CA) said on Monday.

Republicans will take back the House in the next Congress, as Trump-backed Kevin Kiley’s (R-CA) victory brought the GOP to 218 — the number needed to have a majority in the lower chamber.

As a result, House Republicans last week nominated McCarthy to be the next Speaker of the House, receiving 188 votes to former Freedom Caucus Chairman Rep. Andy Biggs’ (R-AZ) 31. McCarthy must garner 218 votes in the House to become Speaker, as they prep to hold the vote in January.

McCarthy is already making a vow ahead of the formal vote.

“Next year, Republicans will start every day of Congress with prayer and the Pledge of Allegiance,” McCarthy said. “No exceptions.”

“Thank you Jesus for making this happen, we all need prayers,” one user wrote as another said, “Praise GOD! Made my day to read this.”

“Amen!! Things will go better I have no doubt!!! Get God back where He needs to be!! Good news!!” one said as another thanked McCarthy for “acknowledging what is missing in the world today.”

During that phone call, National Faith and Values Prayer call, hosted by the American Cornerstone Institute, participants emphasized that the country needs to turn back to God and His ways. 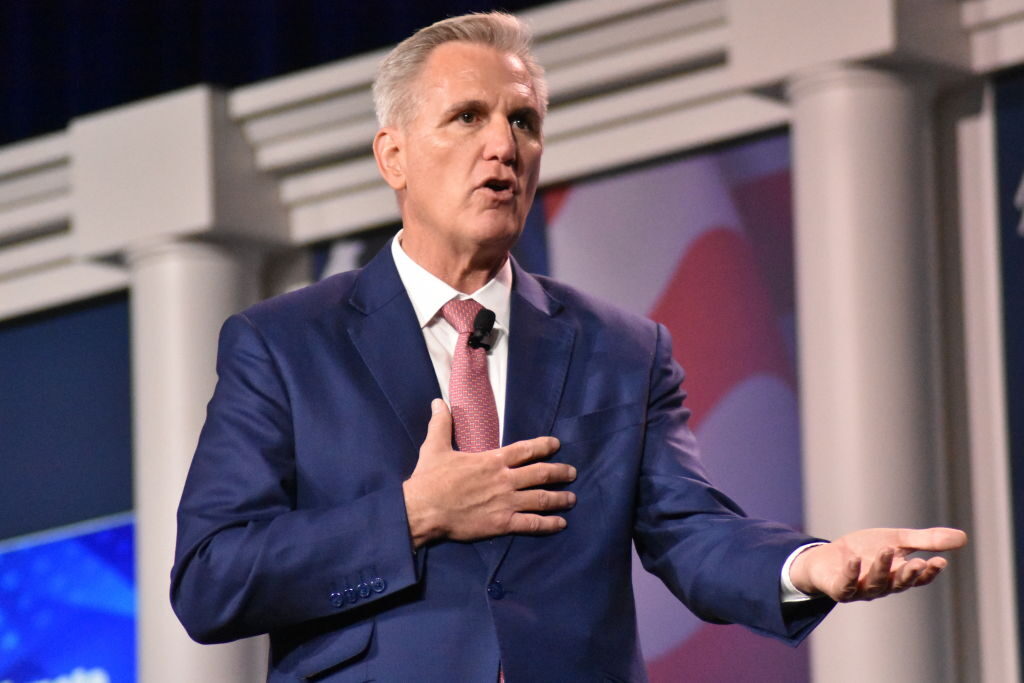 “If the Lord is God, we need to follow in our whole heart. … It’s time to stop living with one foot in the kingdom of God and one foot in the world,” Family Research Council President Tony Perkins  said during the call, speaking of the prophet Elijah’s “epic confrontation” with the prophets of Baal:

And Elijah came near to all the people and said, “How long will you go limping between two different opinions? If the LORD is God, follow him; but if Baal, then follow him.” And the people did not answer him a word.

“I really believe that … this is the message,” he said, praying that the people of the country “will humble themselves, will seek Your face, [and] will turn from their wicked ways.”

Trump also said during that same phone call that “you can see the fingerprints of the Almighty on all of our national triumphs.”

He said during an appearance on Sunday Morning Futures:

I’ll keep that promise. One thing I have said from the very beginning is Eric Swalwell cannot get a security clearance in the public sector. Why would we ever give him a security clearance and the secrets to America? So I will not allow him to be on Intel. You have Adam Schiff, who lied to the American public time and again. We will not allow him to be on the Intel committee either. Look, Congresswoman Omar, her anti-semitic comments that have gone forward, we’re not going to allow her to be on Foreign Affairs, but we’re also going to stand up to what’s happening not just in the halls of Congress, but what’s happening to our higher education institutions, the antisemitism that’s going on these campuses and others. We’ll investigate that as well and stop this to make sure that America does have the freedom that we said we would keep, and we will stand up to it as we move forward with.

McCarthy is also expected to visit the border, days ahead of Thanksgiving.

“When I become Speaker, we’re going to move a hearing down on the border, and I’m going make it bipartisan on both sides. Another promise I’ll make you — I will not allow [Biden] to ignore it. As Speaker, I’ll have the meeting there. Then make them all show and see what’s happening,” he said during a meeting in Las Vegas over the weekend.