ABC News reported the officials briefed on the investigation into the attack say the attacker “legally purchased” his rifle.

The officials who spoke with ABC News officials also pointed out that the attacker’s “2021 arrest may not have appeared on background checks because the case does not appear to have been adjudicated.”

Breitbart News noted that the Club Q attacker allegedly threatened his mother with a homemade bomb in 2021. NBC News observed that he was arrested in connection with alleged threat and charged with “with two counts of felony menacing, and three counts of first-degree kidnapping for the incident.” But the AP pointed out, “There’s no public record prosecutors ever moved forward with felony kidnapping and menacing charges against [the alleged attacker].” 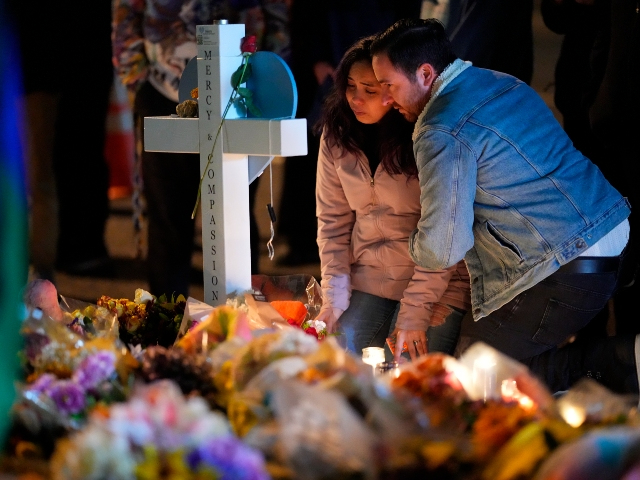 People embrace during a candlelight vigil on a corner near the site of a weekend mass shooting at a gay bar, late Monday, Nov. 21, 2022, in Colorado Springs, Colo. (AP Photo/Jack Dempsey)

The UK Independent explained that the alleged attacker also had a handgun when he entered Club Q, and the handgun was “purchased legally” as well.

Breitbart News reported that Club Q attack was stopped by an Army veteran who took away the alleged attacker’s handgun, then hit him with it.

The veteran, Richard Fierro, pinned the alleged attacker to the ground and hit him repeatedly, while also encouraging other patrons to hit and kick suspect, too.