The report — Keystone XL Extension Permit Revocation: Energy Costs and Job Impacts — brought attention to the positive economic benefits the Keystone XL Pipeline could have had if Biden did not revoke the federal permits for it hours after being sworn into office.

The cancellation received widespread criticism at the time.

Energy’s report indicated the Keystone XL project would have created between 16,149 and 59,468 jobs annually for a two-year period, which is up from a 2014 report sponsored by the department that showed it would have only created 3,900 direct jobs and 21,050 total jobs over a two-year construction.

Additionally, the report, citing multiple studies, showed that there would have been a positive economic impact of between $3.4-9.6 billion over the lifetime of the project.

Biden on his first day on the job axed the Keystone XL Pipeline, drawing the ire of union workers, industry stakeholders, and GOP lawmakers whose states will be negatively impacted by the decision. https://t.co/DiQrYnzJ6m

The Energy Department was required by law after Biden signed the Infrastructure Investment and Jobs Act in November 2021 due to Sen. Steve Daines (R-MT) and Sen. Jim Risch (R-ID) successfully adding an amendment to the legislation that mandated such a report. Fox News noted the report was required to be published within 90 days but was ultimately not released for more than a year.

In a statement from the Energy Department to Fox News Digital, the spokesperson claimed that the project would have had a minimal impact on the permanent jobs but did not mention anything about the thousands of jobs that would have been created during the pipeline construction.

“The U.S. Department of Energy released a report evaluating existing analysis on economic and job effects of the XL portion of Keystone pipeline,” the agency said. “It concluded there were limited job impacts, with approximately 50 permanent jobs estimated to have been created were the pipeline operational.”

When Biden revoked the permit, the project was said to be over halfway done, was on track to be completed in 2022, and would have been operational in the early part of this year (2023). 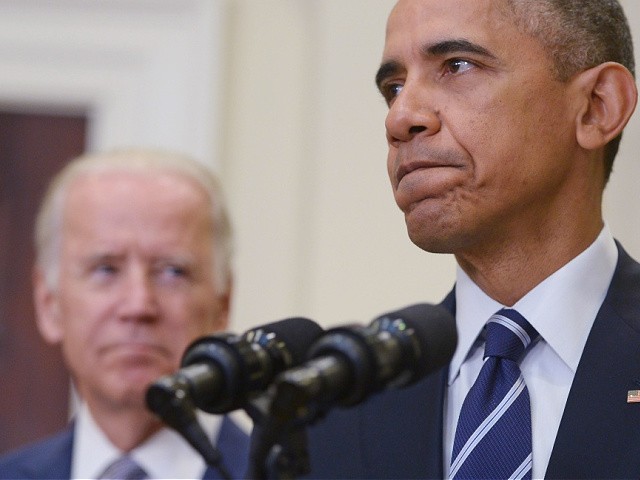 File/U.S. President Barack Obama speaks on the Keystone XL pipeline, watched by Vice President Joe Biden, on November 6, 2015 in the Roosevelt Room of the White House in Washington, DC. President Obama blocked the construction of a controversial Keystone XL oil pipeline between Canada and the United States, ending years of bitter and politically charged debate. (MANDEL NGAN/AFP via Getty)

The Keystone XL would have delivered roughly 830,000 barrels of crude oil from Canada to the U.S. through the pipeline. Additionally, a labor agreement signed by four unions with TC Energy in August 2020 promised the project would have created 42,000 American jobs and 2 billion in total wages.

Following Biden revoking the permits, Keystone XL was no longer a viable project and its builder, TC Energy, moved on from it, confirming its termination in June 2021. Federal judges tossed a challenge from almost two dozen states asking the court to reinstate the pipeline’s permits.