Florida Gov. Ron DeSantis (R) on Thursday vowed to take legal action against President Biden’s attempts to force workers across the country to get vaccinated for the Chinese coronavirus or face termination, emphasizing it is “fundamentally wrong” to take jobs away.

“Let’s not have Biden come in and effectively take away — threaten to take away — the jobs of people who have been working hard throughout this entire pandemic,” DeSantis said during a Thursday press conference in Fort Myers, Florida.

“I am offended that a police officer could potentially lose their job,” he said, outlining what he views as his administration’s duty at the state level, which he said is to do “whatever we need to do to protect Floridians from mandates that could result in them losing their jobs.”

“We have to protect the jobs of Floridians,” he stressed, noting that legal action is on the table. 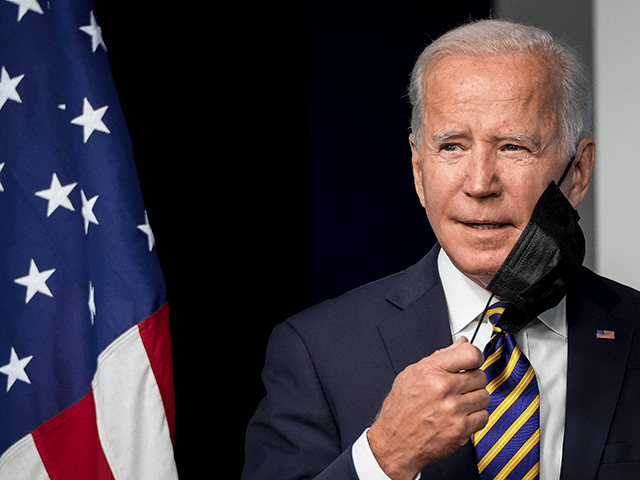 U.S. President Joe Biden removes his face mask as he arrives to speak in the South Court Auditorium on the White House campus October 14, 2021 in Washington, DC. (Photo by Drew Angerer/Getty Images)

“I just think its fundamentally wrong to be taking people’s jobs away particularly given the situation that we see ourselves facing with the economy where you need people in a lot of these key areas,” the Republican governor continued.

“What’s going to happen with these hospitals if these mandates are allowed to go in, where they already need more nurses?” he asked.

DeSantis is among several Republican politicians leading the charge against Biden’s coercive mandates. Last month, President Biden delivered a divisive speech on the coronavirus, where he announced he was directing the U.S. Department of Labor’s Occupational Safety and Health Administration (OSHA) to develop a rule forcing businesses with 100 employees or more to mandate coronavirus vaccines or implement testing requirements. However, it has yet to release the rule.

In May, DeSantis signed legislation, Senate Bill 2006, banning the use of vaccine passports in the Sunshine State, and his administration has acted on it. This week, for example, the Florida Department of Health (FDOH) fined Leon County $3.5 million after it terminated over a dozen employees over a vaccine mandate.

“It is unacceptable that Leon County violated Florida law, infringed on current and former employees’ medical privacy, and fired loyal public servants because of their personal health decisions,” DeSantis’s office said in a statement at the time.

“Governor DeSantis will continue fighting for Floridians’ rights and the Florida Department of Health will continue to enforce the law,” the statement added.