On Friday’s edition of Breitbart News Daily on SiriusXM, veteran pollster Pat Caddell explained that the Ford Motor Company’s decision to move its small-car manufacturing to Mexico has brought the nationalism vs. globalism debate into sharp focus for the electorate.

Caddall noted that Donald Trump pulling to within three points of Hillary Clinton in Michigan — a state that went Democrat in the last six elections, by 10 and 16 points for Barack Obama — shows that 2016 is a “national election” more so than we’ve had in a long time.

“Everyone in the political world and the mainstream media thinks that politics only began in 2008 or 2004. So that every election, the states are organized and there are only a handful of states that matter. No, this election is taking place nationally, and the movement that’s been going on has been going on everywhere,” Caddell told Breitbart Editor-in-Chief and SiriusXM host Alex Marlow.

“In Wisconsin and in Michigan — these are places that in early August, kind of the conventional wisdom said, ‘Oh, these states are already gone!’ And so, all of a sudden, all the ‘gone’ states are back into play, and then the states that were never in play, supposedly, some of them — we don’t have polling everywhere — but like in Maine it’s very close; Trump is ahead in the one district.”

“Even in red states, it’s a closer race, with Trump ahead for the most part, than it has been traditionally,” Caddell pointed out, as further evidence that a major political realignment is in progress.

Caddell looked at recent news about Ford Motor Company moving its small-car manufacturing to Mexico as “something real here in politics” for voters to chew on regarding “the continual trend that both Bernie Sanders and Donald Trump” have pointed out about trade.

This is one of the kind of changing issues of our time, because it’s now related to the economy and jobs, globalism versus nationalism, all of these things are at work here.

Ford is building a $4.3 or $4.7 billion facility in Mexico to build cars. These won’t be the only cars they’re going to build when they do this. They are, in a way, proving Trump’s point, but using it in a way to get out of the country.

This is the onslaught of these corporations and so forth whose interests are not their workers’ or the American people’s. And the fact [is] that they fear Donald Trump, as they should, because he is deadly serious and has been for many years about the way this economy is being played.

To me, I thought his line was a devastating line: the one where it used to be Michigan made cars and people feared Mexican water, and now we have, you know, Mexico makes the cars and we fear Michigan water. This is something wrong in this society. More than anything else, it drives this election. 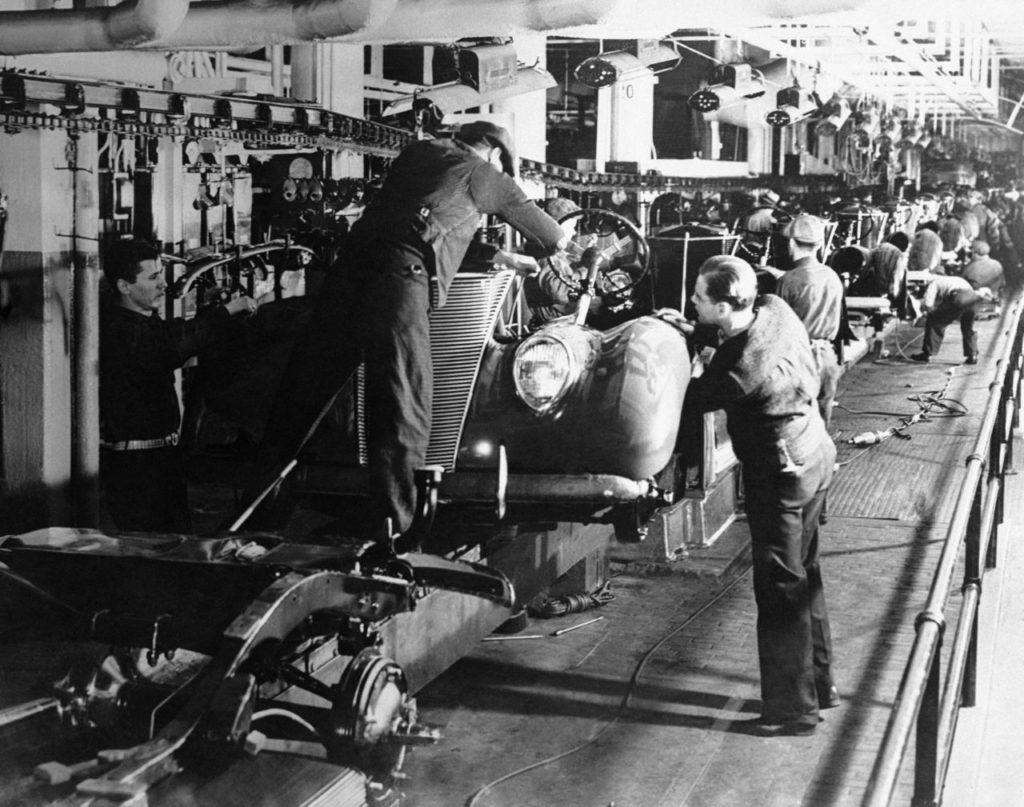 The assembly line at the famous Ford Rouge Plant in Dearborn, Michigan, on Nov. 5, 1945. (AP Photo)

Yesterday Trump gave a strong economic speech, talking about the one thing that we must have in this country. And I don’t know whether his program will do it, but he knows business; that is his strength. We’ve got to do something different because if we continue on this path of one and maybe two percent growth rates we will not be able to finance our country. We will not be able to finance our defense, and particularly [we] can’t deal with the deficit.

The most important thing in America is, we must have three or four percent economic growth again. By making that a centerpiece, whether his plans actually will get is there is not the point. It is, how do we unleash America’s economic abilities. And I think he’s got a strong point here: it’s very hard to do that when you’re not making anything, when you’re outsourcing all of your manufacturing, and plus with it all of those manufacturing jobs.

Look, this is where the elite could care less. You think that those people sitting in their ivy towers along the Potomac, in the elite media and the lobbyists, do you think they care what’s happening to the auto worker or the subcontractors of Ford and Michigan any more than they cared about the employees of Carrier Air Conditioning? The answer is no.

They keep telling us how much better off we are. It’s another one of these, “Do you believe your own lying eyes or me?”

I’m not surprised it’s a big issue. That’s a real issue. That’s a real-world thing happening to us, just like what’s happening in the Middle East now with Iran, which continues to go on a rampage against us, including threatening our aircraft and ships and so forth, since we signed that great nuclear deal that was going to make everything wonderful.

Marlow proposed that while Trump seems to have pulled into the lead in the popular vote, judging by national polling averages, the Electoral College map still looks difficult for him.

Caddell agreed that Trump’s path to victory was “tighter,” because Clinton can count on solid-blue electoral vote jackpots like New York, California, and Illinois, “big population states” — but added that in states like Illinois, he suspected the race was “closer than anyone expects it to be.”

If you take the states where Trump has moved ahead in more than one poll — Florida, Iowa where he’s eight points ahead, which was a big Obama state, helped spring him to the White House in the caucus, it was twice for him, in Ohio where he’s now up there in three polls at least, all consistently showing Trump ahead. You put those in his column, and he’s suddenly very close to being able to — if he can hold the Romney states, he suddenly is on a path to be very, very close, around 260 [electoral votes], a little over 260.

It really comes down to, he must hold North Carolina, in my opinion, because I think Virginia is a very tough state, even though polls show it 3 points, because of what I call the political class suburbs of Washington — the home of the media, the whole thing… the Muslims, a lot of immigrants coming in. And so therefore, I think Virginia’s a tougher state. If he could take Pennsylvania or he can take some other, smaller combination of states, he has a chance to — the path looks close. It looks a whole lot different than it did a week or ten days ago.

By the way, I think this election is by no means decided. The damage Hillary took, which we talked about the day before yesterday, is still not acknowledged. When I look at the 20-point shifts in people since late August, a 20-point increase or so in the people who said Hillary Clinton is physically not able to have the ability to be President. Her transparency problems, Quinnipiac has a poll, their latest poll, which shows 2 points in the four-way race and has been trailing behind — he’s winning on the issue of transparency, who’s more transparent, by 17 points at 54-37. I mean, that’s a huge gap. That has the media hysterical.

Caddell noted millennial voters appear quite turned off by Clinton’s honesty issues, but so far they seem to be “voting heavily for Johnson and Stein,” the third-party candidates in the race.

“That is where those candidates are really hurting her,” he said, suggesting the defection of such voters to third parties might explain why the race remains close on some key issues, including terrorism and the economy.

With apologies for the pun, Caddell wondered if Clinton’s campaign is dealing with an “infection,” in the form of voter trust breaking down after her health crisis and “basket of deplorables” comment the previous weekend. He described the latter as a “critical mistake.”

He had a stern warning for Trump about the possibility of killing his momentum with a critical mistake of his own: swallowing the “poison pill” of returning to questions about “whether Barack Obama was born in the United States.”

Caddell explained that the media has been “intensifying” attacks on Trump’s character to mitigate the damage Clinton has suffered on corruption and honesty issues, but “so far that has not worked.” Returning to the birther issue could give the media the opening it wants to reframe the election narrative around Trump’s character.

Marlow echoed Caddell’s concerns about the media “baiting” Trump on the birther issue, while protecting Clinton from collateral damage by refusing to discuss her role in originating that entire line of questioning during her bitter 2008 primary campaign against Obama.

Caddell mentioned radio host Laura Ingraham’s comment on Fox News the previous evening that Clinton, if elected, would have “unbridled” power, “appointing every federal judge, every prosecutor in the country, every agency head.”

“This is the problem of trying to understand what a larger sense what corruption, institutional corruption is, and putting that in play. And at the same time, obviously, she will be the least transparent President in history. She will be the most protected. She will make Richard Nixon look like an open book. And that is just the truth of it. People need to think this through. Do you really want her, with that kind of power, being deployed that way?” he asked.

Caddell granted that Clinton “looked good yesterday” during a public appearance, in which she “did not give a long speech, it was obviously prepared.”

“Her talking very shortly about her health, very quick thing, it wasn’t a long speech. She took a few questions on it. I would hardly say she was hard-pressed by the traveling press with her,” he noted. “They think well, now that issue will go away. We will see. The whole plan is, and I think they’ve gotta do this, to hope that she has a vigorous and a successful debate appearance, and the health thing goes away. The problem is, it’s against that image in people’s minds, that video.”

Listen to the full audio of the interview above.