“The thing that everyone on the right needs to understand about CRT are its origins,” Spicer said on SiriusXM’s Breitbart News Daily with host Alex Marlow, “and that’s one of the things I document in [Radical Nation], because when we see these discussions that we have with people [who say], ‘You don’t understand what it really is,’ I wanted to understand what [CRT] was, so I actually went back and studied … why [CRT’s architects] came up with it [and] its origins.”

Radical Nation provides the information needed to explain Critical Race Theory and its applications to friends and family who subscribe to left-wing denials of its integration into public education, Spicer remarked.

He continued, “Once you get that, I think the arguments become clearer, because the holidays are coming up. When you sit around on Thanksgiving — and I know that despite Dr. Fauci, she I’m gonna gather with my family — and there’s going to be that crazy person that wants to argue that. ‘This isn’t real,’ just like Terry McAuliffe in Virginia, and I think that you need to have the facts, and the facts are very clear that this was invented to reengineer how we thought about ourselves, our culture, to [cultivate] of a sense of victimhood.”

Spicer said he encounters misinformed people who deny the framework of Critical Race Theory’s and its incorporation into public education.

We stated, “Whenever I have a discussion about CRT, people will say, ‘Oh, that’s not what it is,’ and I’m like, ‘Really? Because here’s exactly what the individuals said that that created CRT. Here’s why they said they created it. Here’s what they set to achieve.”

Spicer noted the Biden administration openly acknowledges its selection of persons for cabinet-level positions on the basis of sexual preference, highlighting Transportation Secretary Pete Buttigieg as an example.

“When [Pete Buttigieg] was confirmed, Biden said to him, ‘I’m so proud that I have two firsts: the first openly LGBTQ person to lead a department … and also one of the youngest,” Spicer recalled. “My point in that is you didn’t pick him because he was qualified. You picked him because he checked two boxes for you.” 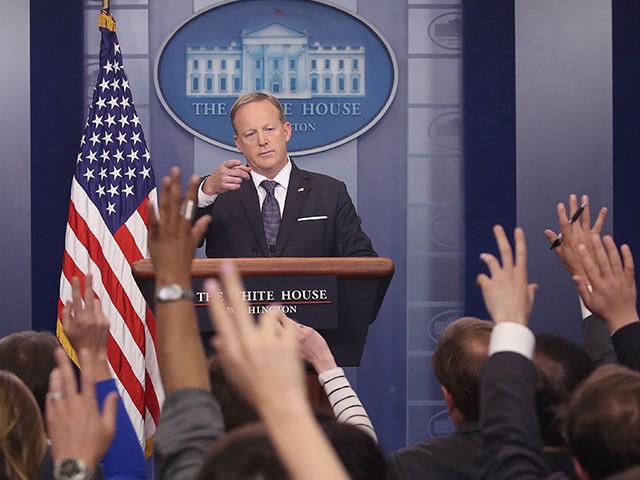 White House Press Secretary Sean Spicer speaks to the media in the briefing room at the White House, on May 30, 2017 in Washington, DC. (Photo by Mark Wilson/Getty Images)

Spicer continued, “When it comes to Pete Buttigieg, we’re not talking about whether he’s qualified. We’re talking about his sexual orientation, I don’t get it. That’s not how we should be running a government, by saying, ‘What box do you check?’ — as opposed to — ‘Are you able to help Americans move forward?'”

Buttigieg didn’t dispute the White House’s rationale for nominating him on the basis of sexuality.

“[Pete Buttigieg] says, ‘Thank you, Mr. President.’ He doesn’t go out there and say, ‘Oh, by the way, I’ve done all this great stuff that makes me super-qualified.’ He actually buys into the narrative, too, which is almost worse.”