Jennifer-Ruth Green, Republican nominee to represent Indiana’s First Congressional District in the U.S. House of Representatives, told Sirius XM’s Breitbart News Sunday host Joel Pollak she decided to run for office when she witnessed Speaker of the House Nancy Pelosi (D-CA) tear up a printout of then-President Donald Trump’s State of the Union speech on February 4, 2020.

Pelosi tore apart a copy of Trump’s speech moments after the 45th president’s completion of its delivery. She later said her intentions were to “get attention” from the media while alleging her actions were spontaneous, despite video evidence of their premeditation.

“Seeing Speaker Pelosi tear up the State of the Union address on national TV on February 4, 2020, that’s ultimately what led me into this race,” Green told Pollak. 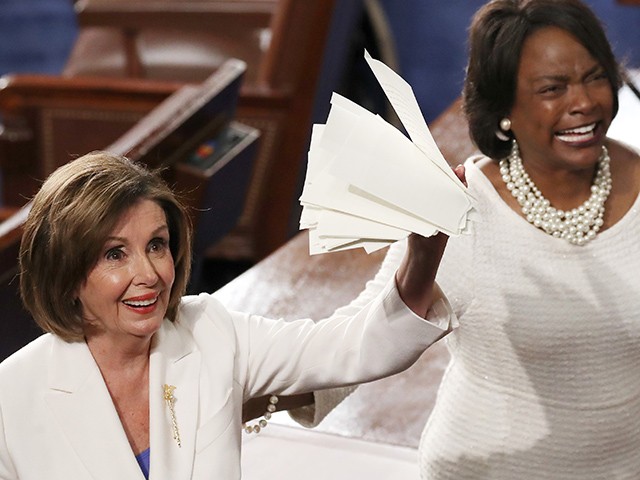 House Speaker Rep. Nancy Pelosi (D-CA) (L) holds up the ripped-up copy of President Donald Trump’s speech after the State of the Union address in the chamber of the U.S. House of Representatives on February 04, 2020, in Washington, DC. President Trump delivers his third State of the Union to the nation the night before the U.S. Senate is set to vote in his impeachment trial (Photo by Drew Angerer/Getty Images).

She remarked, “What I saw when I saw her tear up the State of Union was that her willingness and desire to get applause — and her desire to really show her opinion on a national level — was far more important than my life.”

“You may say that’s a little bit of a stretch, but let me just break it down for a minute and unpack it,” she added. “When we look at the international stage, [America’s enemies] would say, ‘Their leadership is divided at the highest level. They can’t make decisions together. They don’t know what’s next. They don’t know where they’re going to head. They don’t know what they’re supposed to be doing.'”

She continued, “A house divided cannot stand, and that’s very clear, but the legislative body that’s intended to declare war must be responsible to hear everything to make a solid decision and have all the data points. When I saw her tear up the State of the Union address, to me, it said, ‘I will only listen to you if you have the same views as I do.’ If you’re going to be one-sided about your approach for things, how do I know that when my life is on the line and you’re intending to declare war, that you’re going to listen to all sides.”

She said, “I have served alongside these people in uniform for deployments for 18 years at the time [of Pelosi’s actions], and we were starting to unravel. I never knew what political ilk people were next to me. But now, I was starting to know because people started to take sides. That division at the top was spreading down, and that lack of unity within military uniform was really something that opened my eyes, and I said, ‘I  could stand here and just essentially take care of my team and look at for our morale and welfare, but leaders lead from the front.”

“I saw the fact that people in Congress don’t understand the human cost of war and are unwilling to see how their antics at that level directly impact my life,” she shared. “I need to be the one who can help with that situation. I lost confidence in their ability to lead. It was just my responsibility to step up and say, ‘I’m willing to do something different.'”

Green assessed Indiana’s First Congressional District as winnable by a conservative Republican due to worsening economic circumstances driven by left-wing and Democrat policies. She described the Republican party as aligned with “working class people” and the Democrat party as serving “elites.”

“A conservative can win in this district, and I believe we will win come November 8,” she determined. “There are so many things that are helping us. When we look at the district, it’s comprised of working class people, and I’m pro-American worker [and] policies that help the American worker. So remember, thinking about the current policies that are crushing the middle class or that are sending our funds to China or that are causing them to buy up all of our finance debt, I just really believe that it’s causing great difficulty.”

She continued, “The problems that we’re facing here as a country [are] really hitting our district very hard. Industry is a large part of our district. Twenty-five percent of the steel across the nation comes from our district.”

Green said demographic changes in Lake County, IN — driven by people leaving Illinois because of politically driven economic harm wrought by the Democrat party — provide a political opportunity for a Republican victory in a district that has only elected Democrats for nearly a century.

“We’ve also had a lot of movement with people in our district,” she observed. “We have a lot of people from Illinois coming over who are Republicans and more conservative in ideals and values, so the demographics are changing. … When we look at the change in the population, when we look at how the liberal Democrats and far-left have catered to the elites, Republicans are now the party of working people, and because I just want to take care of the people who need to be taken care of, as opposed to the elites, that has really been incredibly helpful.”

“People are listening to our message, and they’re opening their ears to the things that we have to say,” she emphasized. “I firmly believe that we will win and be successful come November 8.”

Green concluded by emphasizing the economic aspect of the 2022 congressional election in her district.