Pepsico, the corporation that owns the Aunt Jemima brand, is erasing the name and the logo portrait of a black woman “to make progress toward racial equality” and in doing so is also erasing the legacy of Nancy Green, a freed slave who had a long career with the Quaker Oats company as a storyteller, actress, and singer. 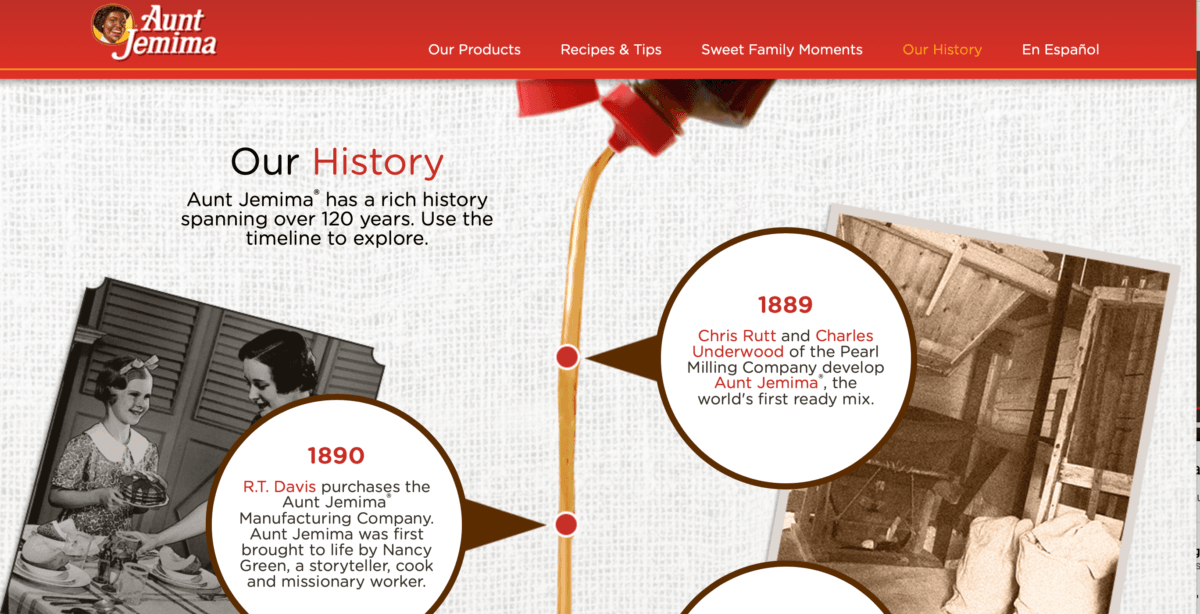 Nancy Green’s story is told in a number of places, including in a YouTube video about her life and career. She is also featured on the African American Registry website:

On this date we celebrate the birth of Nancy Green in 1834. She was a Black storyteller and one of the first black corporate models in the United States.

The world knew her as “Aunt Jemima,” but her given name was Nancy Green. The famous Aunt Jemima recipe was not her recipe but she became the advertising world’s first living trademark.

Miss Green was born a slave in Montgomery County, Kentucky. Chris Rutt, a newspaperman, and Charles Underwood bought the Pearl Milling Company and had the original idea of developing and packaging a ready-mixed, self-rising pancake flour. To survive in a highly competitive business, the men needed an image for their product.

But Nancy Green, at 56, was hired to help the company sell their product at the World’s Columbian Exposition in Chicago in 1893. Green, as Aunt Jimema, cooked and served thousands of pancakes while telling stories and even singing songs.

“Her warm and appealing personality made her the ideal ‘Aunt Jemima,’ a living trademark. Her exhibition booth drew so many people that special policemen were assigned to keep the crowds moving. The Davis Milling Company received over 50,000 orders, and Fair officials awarded Nancy Green a medal and certificate for her showmanship.”

After the fair, Green was signed to a lifelong contract and worked until she died in an car accident in 1923, according to the African American Registry.

The Women of Every Complexion and Complexity website described Green as a “talented entrepreneur” and “transitional symbol.”

Nancy Green’s pancakes are just as popular in the 21st century, but often her name is forgotten as a woman who was born into slavery and its devastation, but turned a localized flour business into a thriving national enterprise and racial stereotypes into symbols of friendliness, hospitality, and prosperity. She was a storyteller, cook, and one of the first African American women hired as a corporate representative. Some people still criticize her and label her as the stereotypical “black Mammy,” while overlooking her individual courage, determination, and talent.

Along with slavery, Nancy Green inherited a legacy of stereotypes about African Americans that continued over a century after the Civil War.  Billy Kersands, himself an African American comedian, songwriter and minstrel show performer, inspired the Aunt Jemima character with his vaudeville song “Old Aunt Jemima” which he wrote in 1875.  His song earned Aunt Jemima popularity in late 19th century minstrel shows and as a symbol in 20th century corporations. The song helped create the Aunt Jemima pancakes brand and several film, television and radio characters called “Aunt Jemima,” but Nancy Green and her dynamic personality were equally important factors in the success of Aunt Jemima character.

Nancy Green transformed Aunt Jemima from a strictly racist, commercial cipher into a symbol of friendliness and hospitality, making thousands of personal appearances for Aunt Jemima Self Rising Pancake Flour and the Davis Milling Company. Several organizations, including the Boys Club at Rockford, Illinois, exist because Nancy Green helped raise funds to support them every year. Nancy Green raised over three million dollars for charities without any personal return for her or her company. In 1914, the Davis Milling Company changed its name to Aunt Jemima Mills Company and Nancy Green continued to travel and promote Aunt Jemima Self Raising Pancake Flour.

Women’s Health magazine published a story about Green on Wednesday and included what led up to the corporate decision:

Quaker Oats didn’t mention it, but the change seems to be tied to a viral TikTok from @singkirbysing in which the singer details “how to make a non-racist breakfast.” In the TikTok, Kirby talks about the history behind the Aunt Jemima brand, and ends with,“Not today. Black Lives Matter, people,” as she dumps a box of Aunt Jemima pancake mix down the sink.

This wasn’t the first time the Aunt Jemima logo came under criticism. In a 2015 opinion piece for the New York Times, Cornell University professor Riché Richardson said the logo was “very much linked to Southern racism” because it was based on a “‘mammy,’ a devoted and submissive servant who eagerly nurtured the children of her white master and mistress while neglecting her own.”

According to the Aunt Jemima website, other black women were cast as Aunt Jimema after Green died, including Anna Robinson and actress Aylene Lewis, who played Aunt Jemima at the Aunt Jemima restaurant in the newly opened Disneyland in California in 1955.

In the 1960s, the Aunt Jemima jingle was debuted:

“Aunt Jemima pancakes without her syrup is like the spring without the fall.”

“There’s only one thing worse in the universe that’s no Aunt Jemima’s all all.”