Barely 48-hours after China angrily threatened sanctions against any country that challenged its hosting of the 2022 Winter Olympic Games, Canada has stepped forward and nominated itself as an alternative.

Green Leader Annamie Paul said Tuesday that Canada should consider offering to play a role in hosting the global competition alongside a coalition of other countries as an alternative to Beijing, given China’s “genocidal campaign” against its Uyghur Muslim minority.

“If an ongoing genocide is not reason enough to relocate a sporting event, then my question is, what is?” she said during a virtual news, as reported by the Canadian Press

She urged the International Olympic Committee (IOC), along with Canada and other countries that condemn human rights violations in China, to find another venue.

An open letter signed by 13 MPs, a half-dozen Quebec politicians and others called for the event to be moved. 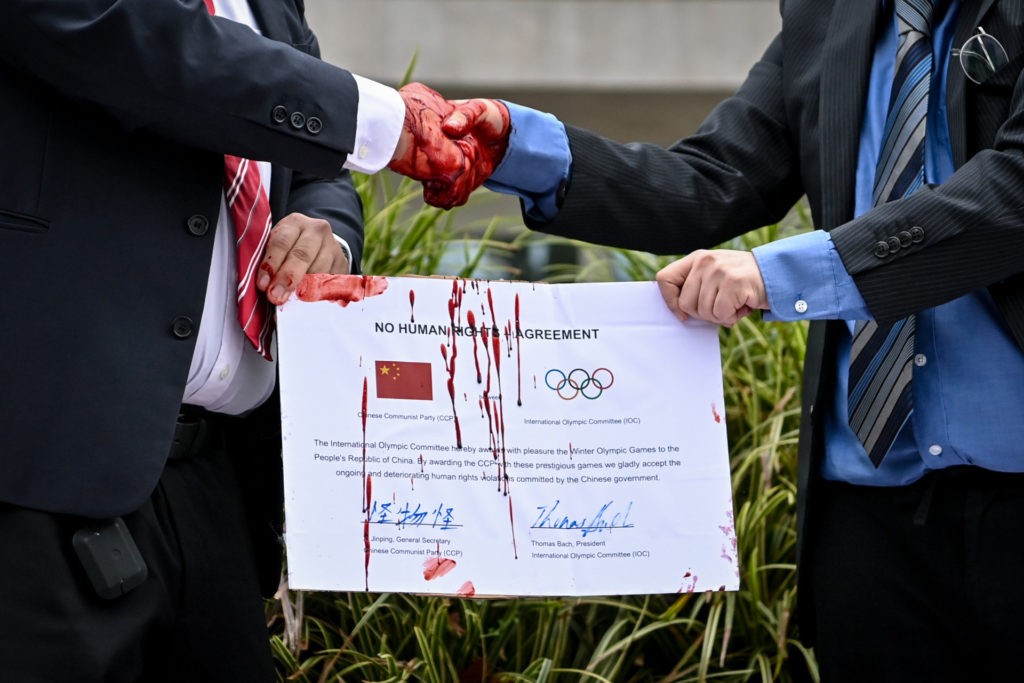 Protesters with masks bearing Chinese President Xi and International Olympic Committee (IOC) President shake hands in front of the IOC headquarters during a protest against Beijing 2022 Winter Olympics, staged by activists of the International Tibet Network, on February 3, 2021 in Lausanne. A coalition of campaign groups issued an open letter calling on world leaders to boycott the Beijing 2022 Winter Olympics over China’s rights record. (FABRICE COFFRINI/AFP via Getty Images)

The letter demands the IOC move the global competition to avoid having athletes “tainted” by an event legislators say would be comparable to the 1936 Berlin games under the Nazi regime, rendering it “The Games of Shame.”

As Breitbart News reported, China has warned any country that boycotts the 2022 event can expect “serious sanctions” as the Chinese Communist Party continues to reject allegations of “genocide” against Uyghur Muslim minorities.

Several U.S. Republican senators led a resolution last week to move the Games last, following the United States’ designation that China’s actions in the region was “genocide” in the last days of the Donald Trump presidency.

The Biden administration has so far said it had no intention of telling its athletes not to go.

Beijing 2022, which will be the largest Winter Games yet with 109 medals on offer, is set to begin on February 4 next year.

This will be China’s first time hosting the Winter Olympics, after holding the Summer Games in Beijing in 2008. The city will be the first to host both Summer and Winter Games.