The National Football League (NFL) published a map on social media Thursday incorrectly depicting the sovereign nation of Taiwan as part of China.

The map was meant to illustrate the debut of “International Marketing Areas” for different teams; the Los Angeles Rams were designated to promote their brand in China. As American football is largely unpopular around the world and appetite for the NFL at home has declined significantly, the league appears to be following the National Basketball League (NBA) in seeking to profit from business with communist China, despite its extensive record of human rights atrocities, including crimes against athletes. 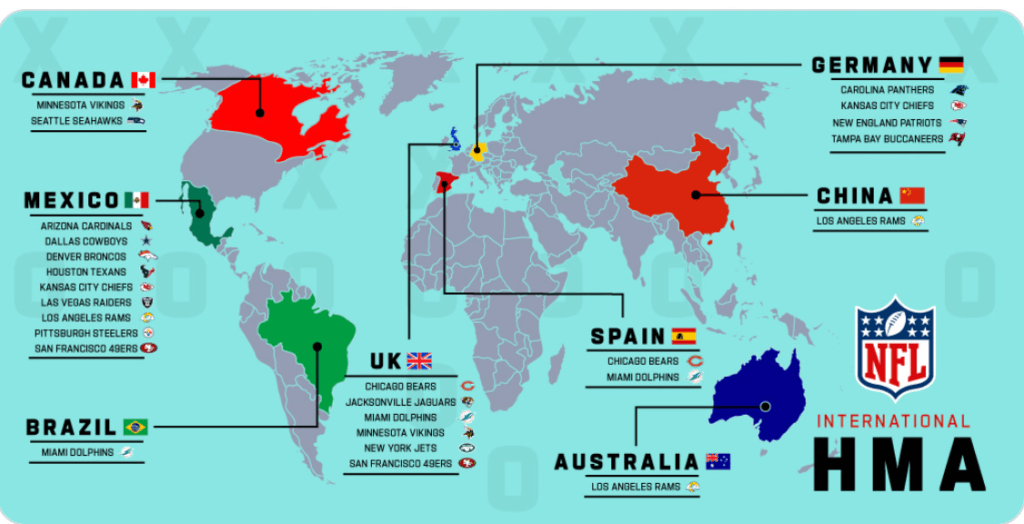 The inclusion of Taiwan, a sovereign state with no political ties to Beijing, in the map of China was especially notable given that the map did not include any significant illustrative detail and omitted key offshore regions of other countries highlighted. For example, Spain – where the Miami Dolphins and Chicago Bears are designated to promote their brand, also appears in red, but a significant number of regions of Spain away from the mainland – the Canary and Balearic Islands, Ceuta and Melilla in Africa – do not.

The NFL announced that 18 professional teams will have access to “eight different countries” and did not independently list the country of Taiwan as one of them in its official press release. The league said:

The NFL’s attempts to expand into international markets have not exactly translated into big dollars or a major fanbase. In London, for instance, the league has held as many as 30 games, none of which have included top-tier teams or generated significant audience interest.

“It would be bad foreign policy if another nation agreed to import food from American farms and we sent them boat after boat filled with rancid, expired meat. So why do we continue to export our rancid, expired football teams?” noted The Ringer.

Expanding into international markets could possibly stem from the NFL’s decline in U.S. ratings in recent years, especially in the much-desired under 50 demographic. As Breitbart News reported in early 2021:

According to Sports Media Watch, Super Bowl 55 saw a decline in the 18 to 49 viewer demographic for the ninth year running. The 2021 Super Bowl lost another 37 percent of viewers in that age demo over last year’s audience.

But this year’s number is just another dip compared to past years. The game lost 43 percent in young viewers four years ago and 51 percent in 2008.

Beyond the NFL, the National Basketball Association (NBA) has doggedly pursued the Chinese market, with an estimated $500 million in revenue, while censoring its players and coaches for fear of offending communist party leaders. This past November, when Enes Kanter Freedom of the Boston Celtics began wearing his “Free Tibet” sneakers, representatives of the NBA reportedly told him to stop; when he refused, China banned all Celtics games from streaming in the country.

Erasing Taiwan to appease communist China has become a common practice for corporations outside of sports looking to access the major market, as well. In one notable example, producers of the Top Gun sequel eliminated the Taiwanese and Japanese flags from the character Maverick’s iconic jacket.

There’s a new Top Gun movie coming out. And Maverick is wearing the same leather jacket – only this time it’s Communist Party of China-approved, so the Japanese and Taiwanese flag patches are gone (screenshot on right is from the new trailer)… pic.twitter.com/gUxFNFNUKX

In May of this year, wrestler-turned-actor John Cena publicly apologized (in Mandarin) on the Chinese government-controlled social networking site Weibo after he referred to Taiwan as a “country” when promoting the new Fast & Furious movie ahead of its China release.

“I did many, many interviews for Fast & Furious 9, and I made a mistake during one interview,” Cena said in the video. “I must say, which is very very important, that I love and respect China and Chinese people. I’m very, very sorry for my mistake. I apologize.”

Taiwan is a sovereign nation with separate political, military, academic, and cultural institutions from China. The island has never been ruled by a government based in Beijing. Despite this, the Communist Party incorrectly insists that Taiwan is a rogue “province” of China. In 2019, dictator Xi Jinping threatened Taiwan and all the nation’s supporters that China would have their “bones ground to powder” if they continued to resist the Party’s conquest.