The final scheduled press briefing at the Winter Olympics in Beijing on Thursday turned into a propaganda event as IOC officials allowed a Chinese official to shut down reporters’ questions about human rights abuses in the communist country.

When Beijing 2022 Spokesperson Yan Jiarong was asked about the treatment of religious minorities and Taiwan’s sovereignty, IOC Spokesman Mark Adams allowed her to rebuke the press.

“What I want to say is that there is only one China in the world,” Yan said.

She called claims of genocide against Uyghurs “based on lies.”

The Associated Press reported on the controversial press conference:

Following up on a question about Taiwan’s reported attempt to skip the opening ceremony, Yan asked for extra time to address the status of the self-governing island, which China views as its sovereign territory.

Adams was immediately questioned by a non-Chinese reporter who suggested that Yan, herself, had ‘politicized’ the Games by raising China’s stance on Taiwan. Adams dodged the question.

“There are views on all sorts of things around the world, but our job is to make sure that the Games take place,” Adams said. 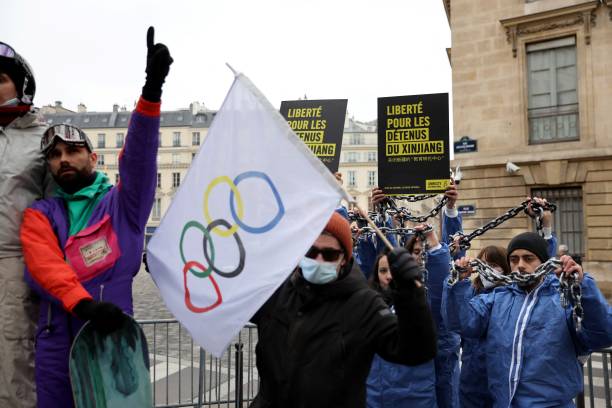 Amnesty International activists demonstrate outside the National Assembly in Paris on January 26, 2022, to call for the opening by the French parliament of an inquiry over the human rights situation of Uyghurs in China. (Photo by THOMAS COEX/AFP via Getty Images)

A young Chinese woman who has been volunteering at the games was asked about Chinese tennis player Peng Shuai, including whether she is safe after the star has virtually disappeared from public view after criticizing the Chinese government. 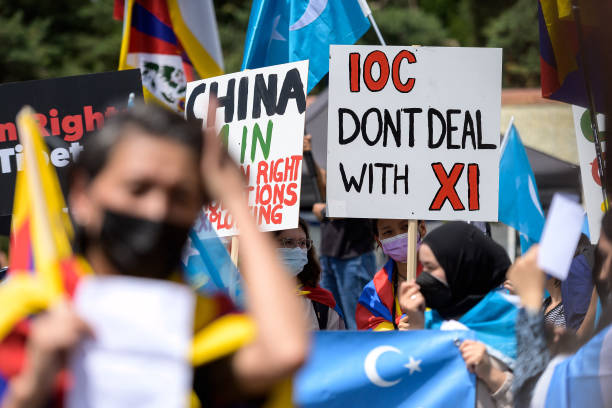 Tibetan and Uyghur activists held placards and flags during a protest against the Beijing 2022 Winter Olympics in front of the Olympics Museum in Lausanne on June 23, 2021, as some 200 participants took part in the protest. (Photo by FABRICE COFFRINI/AFP via Getty Images)

When another reporter asked Adams about concentration camps and forced labor in China, he dismissed the inquiry as not “particularly relevant,” and Yan again advanced CCP’s narrative.

“I think these questions are very much based on lies,” Yan said. “Some authorities have already disputed this false information. There is a lot of solid evidence. You are very welcome to refer to all that evidence and the facts.”