Iranian media confirmed the arrest on Thursday of one of the country’s most prominent soccer stars, the ethnic Kurdish player Voria Ghafouri, for supporting the ongoing anti-regime protests across the country.

Protests erupted in the repressive Islamist state in September after the regime’s “morality police” beat a 22-year-old Kurdish woman, Mahsa Amini, to death for allegedly not wearing her headscarf properly. The headscarf, or hijab, is mandatory for women to wear in Iran, purportedly out of deference to Islamic law although the Quran does not require it.

The protests have endured for months. Iranian regime officials have responded to calls for the overthrow of Supreme Leader Ayatollah Ali Khamenei with disproportionate violence, arresting over 700 and killing nearly 450 people. One human rights group estimates that the confirmed number of arrests is a small percentage of the as many as 18,000 people who may be in police custody for participating in acts of dissent.

Iran’s “Team Melli,” as the national soccer team is referred to, suffered a dismal debut at the 2022 FIFA World Cup this week, losing 6-2 to England. Iranian state commentators and regime sympathizers blamed the poor performance on the protests, claiming that the players were enduring “psychological warfare” from Iranians rooting against the team, nicknaming it “Team Mullah,” and demanding the players speak up on behalf of their people.

The players on Iran’s national team have not publicly spoken out against the regime, and accepted a friendly meeting with Iranian President Ebrahim Raisi before departing to Qatar, an Islamist dictatorship controversially hosting the tournament. Prior to their game with England, however, the players conspicuously failed to sing their national anthem while it played at the stadium, a move that many interpreted as a sign of support for the protests and opposition to the regime. The team played amid audible boos from their own fans, intended as a protest against Khamenei. 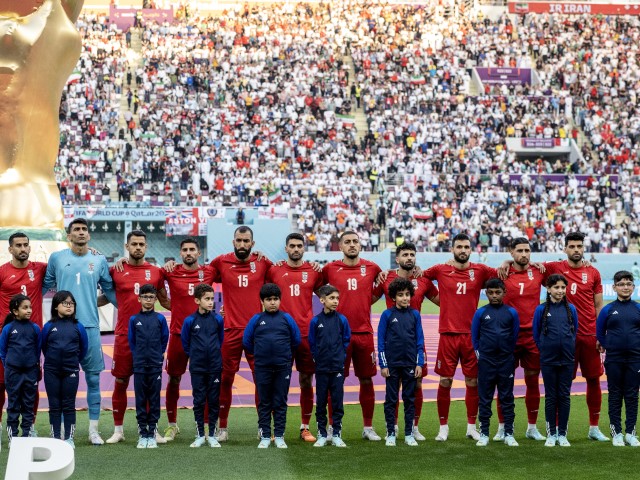 The Iran team refrain from singing the national anthem ahead of the FIFA World Cup Qatar 2022 match between England and IR Iran at Khalifa International Stadium on November 21, 2022, in Doha, Qatar. (Sebastian Frej/MB Media/Getty Images)

The arrest of Ghafouri, who was not on the national team despite his prominent positions in the past on multiple private clubs’ teams, appeared to be a message to those in Qatar to not deviate from the government’s messaging.

The Iraqi-based network Kurdistan 24 cited two pro-regime Iranian publications, the state Fars News agency and the Tasnim News Agency, as confirming Ghafouri’s arrest. At press time, articles regarding the incident do not appear on either of the outlets’ English-language pages, suggesting the news has been limited to their Farsi publications. Tasnim instead prominently posted on its front page an article on Iran’s second match in Qatar, a surprise victory against Wales.

The outlets, Kurdistan 24 noted, said that Ghafouri had been charged with the “crime” of “insulting the national soccer team and propagandizing against the government.”

Unlike those on the World Cup team, whose lack of singing at the tournament was taken as subtle defiance of the regime, Ghafouri has been openly critical of the Islamists and supported women’s rights and efforts to stop the repression of Kurds in western Iran. Following the eruption of the latest rounds of protest in September, Ghafouri, in solidarity, publicly visited the family of a woman killed by Iranian state security forces and has vocally called on his social media platforms for the regime to respect human rights. 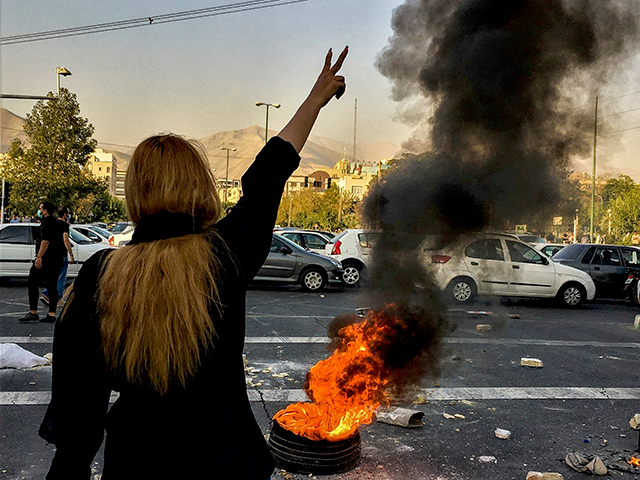 In this photo taken by an individual not employed by the Associated Press and obtained by the AP outside Iran, Iranians protests the death of 22-year-old Mahsa Amini after she was detained by the morality police, in Tehran, Oct. 1, 2022. (AP Photo/Middle East Images, File)

Prior to Iran’s victory against Wales in their second match, Iranian state media outlets blamed anti-regime protests and public expressions of support for women’s rights for the 6-2 defeat against England, made even more bitter by goalkeeper Alireza Beiranvand injuring himself by crashing into a teammate. Some reports indicate that Beiranvand, who skipped the Wales match, will return to the field when Iran confronts the American team on Tuesday.

Iranian national team coach Carlos Queiroz appeared to support the regime’s shift of blame following the England match, barking at Iranian fans who oppose the regime to “stay at home.”

“It would be much better for them to stay at home. We don’t need them. It’s something the players feel when they are not playing,” he told reporters.

Prior to the tournament’s start on Sunday, Queiroz said at a press conference that dissidents were “not welcome” to support the Iranian team.

“To those who come to disturb the team with the issues that are not about the football opinions, they’re not welcome because our boys, they’re just simple football boys,” he claimed.

“Iranian players have been under tremendous psychological pressure the past few weeks amid a relentless campaign by hostile forces in the West to de-legitimize them and affect their morale ahead of the World Cup,” the Iranian state outlet PressTV claimed in an article published last week, tempering expectations for their success. “They have been viciously trolled and abused online under a deep-rooted conspiracy.”

Protests within the country, particularly in the Kurdish region, have yet to abate. On Friday, Iran’s Islamist Revolutionary Guard Corps (IRGC) – an official wing of the Iranian armed forces that America has designated a terrorist entity – announced a new operation in Iranian Kurdistan to prevent the alleged distribution of weapons by Kurdish forces outside of Iran’s borders. The territory of Kurdistan crosses into parts of Iraq, Syria, and Turkey, in addition to Iran.

The operation appears to be the latest step in the Iranian regime attempting to rebrand pro-democracy protests nationwide as a primarily Kurdish separatist movement.

“The IRGC ground forces are resolutely dealing with the factors of insecurity in the region by strengthening internal forces in the border area of the western and northwestern provinces of the country with the cooperation of the zealous local people,” an IRGC official allegedly claimed, according to the Kurdish outlet Rudaw.

Rudaw noted that Kurdish leaders in the region have expressed alarm that the regime has responded to the protests by sending “tanks, armored vehicles, artillery, and drones to the Iranian borders.”