Universities, places of free thought and intellectual development, are under attack by campus crazies who want to stop people talking if they do not comply with today’s most fashionable extreme ideologies, such as radical feminism or Islamism.

The crazies hide their yearning for outright censorship with attempts to “no- platform” controversial — that is, interesting — speakers.

If that fails, they’ll try turning talks into debates, or set up a rival event or protest. Effectively, anything to try and take the spotlight away and turn it back on themselves. Forcing student societies to turn a talk into a debate is a slimy way of reducing the impact a speaker might have: the “diversity” of viewpoints they say they want really just means the same tired old lefty rhetoric that already saturates college campuses.

And I’ve noticed something a bit odd: the silencing tactics of the “no platform” brigade are not dissimilar to that of the terrorists responsible for the massacre on the Charlie Hebdo offices in Paris earlier this year. Bear with me.

Campus crazies might lack the propensity, or at least the dedication, to massacre people. But they do share one core belief: that their ideologies are somehow privileged and should be protected from criticism. Those who do criticise them should be punished.

It’s well known that the Koran is considered by Muslims to be the final, perfect and unalterable word of Allah. Feminists haven’t quite reached that level of unquestionable infallibility yet, but they’re working on it!

Attempts to no-platform are rampant, particularly in British universities. The supposedly “transphobic” veteran feminist campaigner Germaine Greer, a man who fought against ISIS and, of course, Breitbart’s own Milo Yiannopoulos have all been told their views are not welcome in order to “protect student safety.”

But who exactly is unsafe? I guess Milo could be a closet MMA champion, but I doubt it. I think what these wacky progressives actually mean is that he’s a threat to some students’ comfort. If something you disagree with makes you feel uncomfortable… frankly, tough shit. 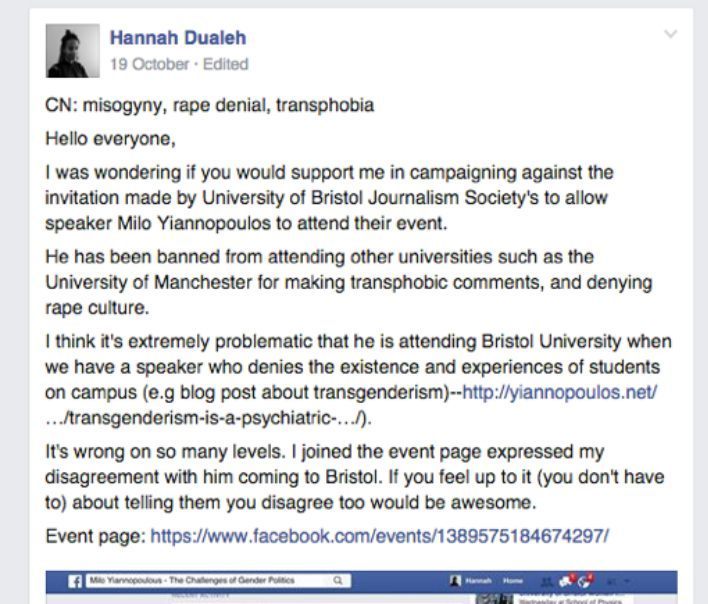 “It’s wrong on so many levels”

At universities, surely no thought or idea should be off limits. Who wouldn’t relish seeing the likes of Vladimir Putin, Robert Mugabe or Kim Jong-Un stand on a podium and deliver a speech to a bunch of goggle-eyed students, who would then proceed to tear them apart in the Q&A?

Granted, Mugabe might collapse from the stress of it all; the poor dear, Kim would need a mobility scooter after scoffing down all that cheese; and Putin would attempt to derail the event by demanding an entirely heterosexual audience. But assuming these obstacles could be overcome, surely the presence of these odious individuals would be an enriching experience for students?

I say this not because I condone these people’s views — obviously — but because it would give students the chance to hear from the leaders who pose the greatest threats to western civilisation. It would help the next generation of western intellectuals, doctors, teachers, lawyers and politicians to understand why they act the way they do.

This is why bigots, homophobes, and dictators should be allowed to speak: so their poisonous ideologies can be publicly discredited. You see, the best response to hateful speech isn’t censorship, but a spotlight.

“No-platform” culture assumes that students, supposedly the most educated young people in society, are somehow vulnerable to radicalisation. While I admit that there is a specific problem with Islamist hate preachers on British campuses, perhaps if they were given huge, diverse audiences rather than being secreted in by Islamic societies, the full student body would be able to challenge their hateful opinions.

Whatever we do, we should be consistent. At present, students in the UK and America are making bizarre decisions that speak to their tortured priorities. London Universities such as SOAS, Queen Mary, and King’s College give a platform to pro-ISIS terrorist sympathisers such as Hamza Tzortzis, Haitham al-Haddad, and Imran Ibn Mansur, whilst banning those who express skepticism about gender reassignment surgery.

The Oxford Union, which has a better track record, invited French National Front leader Marine Le Pen, media personality Katie Hopkins, and former EDL front man Tommy Robinson. All three events had students queuing outside for hours to get in. Students who felt strongly opposed to the views of the speakers were able to turn up and challenge the speakers, and do their best to humiliate them.

If you really are so irritated by a speaker — as I am regularly by events put on by my university’s student union — then the solution is achingly simple. Don’t go. 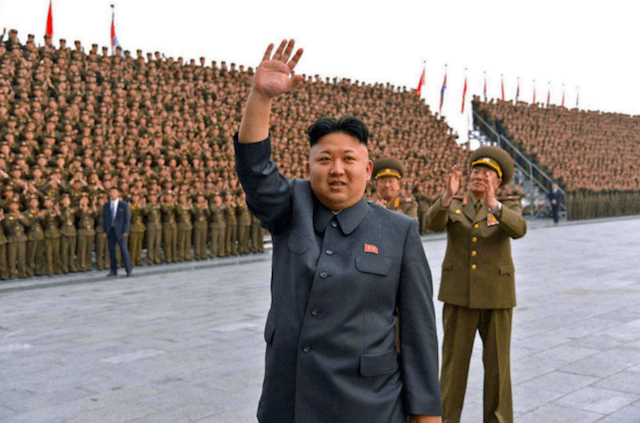 Would students give Kim the reception he receives back home?

When historian David Starkey butted heads with Mehdi Hasan on Question Time in January after the Charlie Hebdo attacks, Starkey rightly reminded Hasan that “the idea that because you feel so strongly about something that nobody must challenge you is an absurdity.”

“I would completely repeal the law of Holocaust denial as it’s completely unnecessary,” he said. Starkey quoted the example of David Irving, a prominent Holocaust denier, “who was shredded apart by my colleague Richard Evans in a way no law could. Freedom of speech is us. It’s what we are.”

Dismantling arguments and ideologies with free speech and open debate is far more powerful than any law or no-platform policy could ever be. Humans crave what they can’t have, and all a ‘no-platform’ does is make people want it even more.

We need to have faith in the marketplace of ideas. It’s always totalitarians who want to censor free speech because they can’t defend their ideas in free and open debate, such as feminists, Islamists, and the dictators I’ve suggested above. When someone tells you, “Don’t listen to that person,” it’s very often a sign that they have something interesting or thought-provoking to say.

Why not check it out yourself, rather than accept the prescriptions of nannying student union Puritans?

Universities, full of students keen to broaden their political horizons, should be constantly pushing boundaries, testing the limits of what can be thought and said, widening the Overton window. It should be security services asking students to tone it down, not the students themselves.