Islam critic and American Freedom Defence Initiative President Pamela Geller slammed Facebook in an interview with Breitbart this evening, rejecting their pretenses of political neutrality and urging conservatives to fight back.

Geller’s 50,000-strong Facebook group, “Stop Islamization Of America” was removed from Facebook earlier today, despite being active for over five years, due to allegedly “hateful content.” A few hours later, her own Facebook account received a 30-day ban after she made a post criticizing President Obama for his response to the Orlando shootings. 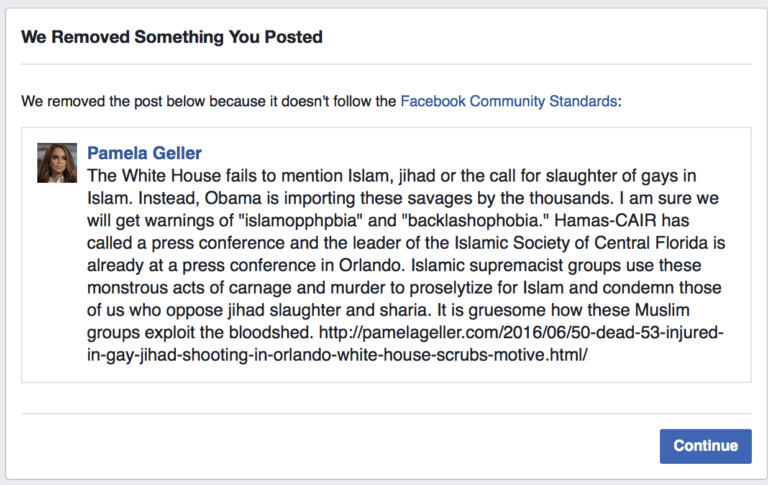 The timing of Facebook’s sudden burst of censorship – just a day after the Muslim terrorist Omar Mateen carried out the deadliest terror attack on U.S. soil since 9/11 – is hard to ignore. It also casts doubt on the social network’s claims to political neutrality, which the company repeatedly pushed during last month’s “Trending News” scandal.

In an interview with Breitbart, Geller emphasized the need to fight back against Facebook:

AB: Facebook say they took down your page because of their rule against “hateful, obscene, or threatening” content. What’s your response?

AB: Why do you think they took the page down now, of all times?

PG: They are in full damage control mode. Orlando showed jihad for what it is. They’re committed to obscuring that knowledge and making sure people remain ignorant and complacent about the nature and magnitude of the jihad threat.

AB: They’ve also banned your own account, for thirty days. Is this the first time that’s happened to you? What are they so afraid of?

PG: No, it has happened before, when I get too close to truths they want to cover up. They’re afraid these truths will get out, and that people will start acting to remove the feckless and traitorous leaders who got us into this fix. They are blocking and banning me now, especially now, when people are looking past the media myths provided by terror-tied groups like Hamas-CAIR.

AB: Facebook spent much of last month assuring the public that they aren’t biased against conservatives. What are we to think of those assurances, in light of what happened today?

AB: How should critics of Islam respond to this? Protest? Boycott Facebook? Seek out other platforms?

PG: By continuing to speak the truth. Yes, protest. Yes, establish other platforms. But Facebook is too large to be ignored, or to be hurt by a boycott. Facebook quislings must be called out. If voices of freedom and truth leave it, we will have no significant platform. Better we keep up the pressure on Facebook to stop trying to silence conservatives.

AB: Do you think Facebook’s ban on “hateful” content will ever encompass Islamist content on the platform?