Pepsi is in trouble with the left. The sugary beverage company recently released an ad featuring Kendall Jenner as a left-wing protester, handing a can of Pepsi to a police officer during a rally. The left doesn’t like this because, apparently, you should never be nice to a policeman.

If anything, the outrage from the left shows that modern-day leftist activists don’t know the history of their own movement. Photos of peace activists handing flowers to riot police were among the most iconic images of the 1960s, and became a common theme in subsequent left-wing demonstrations. 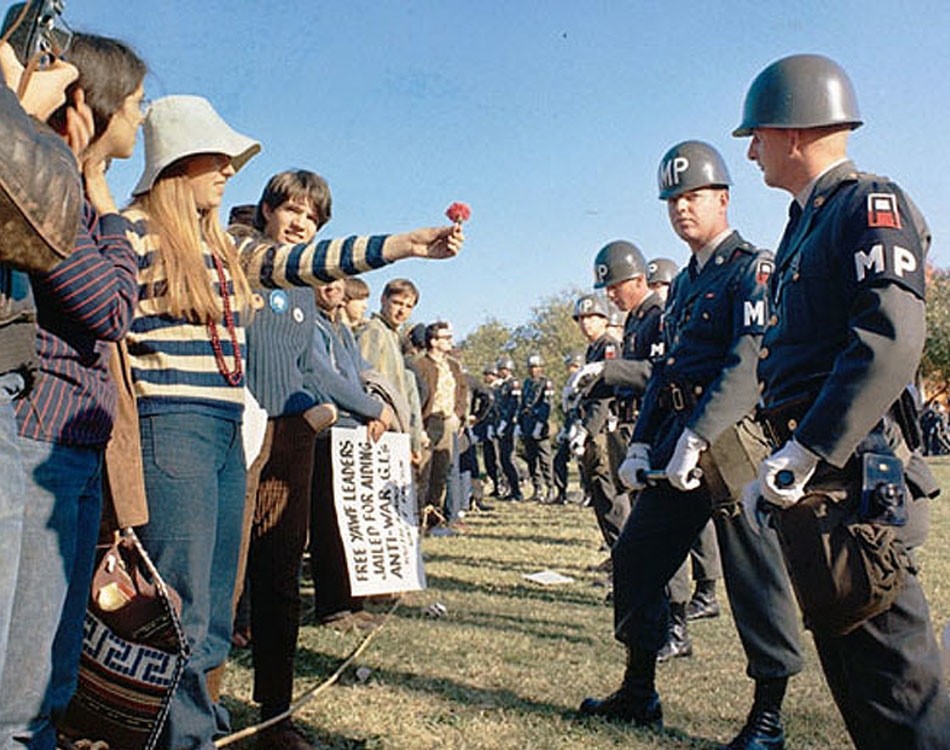 Some are claiming that the ad was inspired by this photo from a Black Lives Matter protest. But images of protesters handing gifts to police officers have appeared so often in history that it could have been inspired by any one of them.

If I had carried Pepsi I guess I never would've gotten arrested. Who knew?

Mckesson was smart enough not to accuse Pepsi of trying to leverage social movements for private gain. Mckesson, we must remember, has used his Twitter account to hawk everything from Verizon data plans to LGBT-themed Doritos.

I just changed my @Verizon plan to the newly released Unlimited Plan. It's a game-changer. #VZunlimited

Deray has denied that these tweets are sponsored, at least in the case of Verizon. I guess that settles the matter then. Nothing to see here, folks!

The new Dove men's deodorant is the best I've ever used. Hands down.

— CEO at hogwarts school of witchcraft and wizardry (@Lowenaffchen) September 28, 2015

Of course, it’s possible that Mckesson is telling the truth. Perhaps he really is just the most easily-impressed person on Twitter. At this point, though, I’m only surprised he hasn’t sold advertising on his vest like a NASCAR driver

Over the past two decades, politics on the left has become a form of LARPing. (LARPing, or Live-Action Roleplaying, is where people play dress-up as superheroes, like Green Arrow, Batman, or Gandhi).

As early as the 1970s, left-wing activists were serious about achieving their political objectives. They were willing to kill, die, and go to jail in pursuit of their political ideals. They were brutal, immoral and deeply misguided, but they were also serious.

Modern left-wing activism is nothing like that. It’s still violent, yes, but the masked “anti-fascists” burning down campuses and beating up Trump supporters show no willingness to accept that they may face consequences for their actions. Nor do they show any signs of the Weather Underground or the Baader Meinhof faction’s plans for the radical overthrow of western society.

Involvement in left-wing activism, today, is not about remaking society or achieving political utopia. Today, it’s about virtue-signalling: demonstrating to your peers and to society at large that you’re not a racist, not a sexist, not a homophobe, and so on. It’s about showing how bold and edgy you are. The masked protesters who threw firebombs at Berkeley were probably thinking less of how their actions would lead to a better world, and more about the cheers of approval they’d get from their buddies. In short, it’s about being cool.

Celebrities – like Kendall Jenner – have encouraged this perhaps more than any other group. Virtue-signalling from Hollywood stars and pop singers has become so routine that when Lady Gaga didn’t attack Donald Trump during her Super Bowl performance, the left reacted with shock. A singer who simply sings, without making political statements, has become difficult to comprehend.

Brands too, are relentlessly pressured by the left to endorse their cultural values. CEOs with conservative political values, like Brendan Eich, do not last. In Chick-fil-A’s case, the CEO’s opposition to same-sex marriage was enough to spark a nationwide boycott. The presence of a single open Trump supporter, Peter Thiel, on Facebook’s board of directors, has led the left to agitate for his removal.

Because of these twin pressures: to be seen as cool, and to avoid controversy, it has become impossible for brands not to be progressive. The virtue-signalling left has made its values a path to social status, and instinctively kicks up a controversy when they are not respected. Faced with this, brands don’t have a choice.

Pepsi was trying to suck up to leftists with its ad, not upset them. That much is clear from their grovelling apology and pledge to remove the ad following the outrage:

The left has made it impossible for brands to demonstrate any values other than progressive ones. In the case of celebrities, not demonstrating progressive values is seen as unusual. It is utterly surprising that Pepsi, and Kendall Jenner would kowtow to those values.

Which, again, leads me back to the point I made at the start of this piece: It’s not a problem for the left that Kendall Jenner dressed as a protester to hawk Pepsi. It’s that she was nice to a police officer while doing so.