Facebook CEO Mark Zuckerberg has all but conquered the tech world, and based on his latest activities, it seems that he may have his sights set on the world of politics.

Over the course of the past year, Mark Zuckerberg, the CEO of the largest social media platform in the world, has slowly been moving his way into the political sphere. Zuckerberg initially began his move into politics by funding causes and political groups that he found noteworthy, but the 33-year-old billionaire’s recent actions have led many to believe that he may be stepping into the political sphere in an extremely active role in the future, possibly even running for president. Here are some of the indicators that Mark Zuckerberg may be running for president in the future.

1: Zuckerberg’s Friends Say He Plans to Run for Office in 2024

It was recently reported that Mark Zuckerberg’s own close friends believe that he plans to run for office in 2024, adding that he apparently quotes “Greek legends” to his employees and “wants to be emperor.” One insider who believes Zuckerberg may soon be moving into politics claimed, “He’s been incredibly careful about cultivating a specific type of persona over the past few years.”

Zuckerberg’s friends reportedly believe that the Facebook CEO is “naturally drawn to leadership” and allegedly once recited scenes from the film Troy to a room full of Facebook employees.

2: He Has Worked Closely with Obama and His Former Administration

Zuckerberg made headlines in 2011 when he held a Town Hall Q&A at the Facebook HQ in Palo Alto with then-President Barack Obama. The two appeared in public together again in 2016 at Stanford University for a White House entrepreneurship conference where they reportedly discussed business, globalization, and Brexit among many other topics. In January of 2017, Zuckerberg hired David Plouffe, a senior Obama advisor, to the Chan-Zuckerberg Initiative, a charitable organization founded by Zuckerberg and his wife Priscilla Chan in 2015.

Plouffe was the manager of Obama’s 2008 campaign and was hired to Zuckerberg’s charitable organization to lead policy and advocacy efforts. “I’m excited to work with David on this. He has great experience building movements as part of companies like Uber and as campaign manager for Barack Obama’s presidential campaign,” said Zuckerberg discussing the hiring of Plouffe.

During his keynote speech at the Facebook F8 Developer Conference, Zuckerberg discussed a number of hot topic political issues such as immigration, climate change, and globalization. “As I look around the world, I’m starting to see people and nations turning inward, against the idea of a connected world and a global community,” said Zuckerberg. “I hear fearful voices calling for building walls and distancing people they label as ‘others.’ I hear them calling for blocking free expression, for slowing immigration, for reducing trade, and in some cases even for cutting access to the Internet.” Some believe that Zuckerberg’s criticism of “building walls” was a swipe at President Trump.

4: A PAC Is Urging Zuckerberg to Run – and Taking Donations

A Political Action Committee known as “Disrupt For America” is directly calling for Mark Zuckerberg to run for president and is taking donations to convince the CEO to do just that. The PAC’s website reads, “Disrupt For America is a progressive advocacy group focused on pragmatic, grassroots activism with an emphasis on social media, organized assembly, and open discourse and debate. The diversity and sheer scale of the grassroots resistance against Donald Trump’s presidency has been unprecedented and highlights a significant opportunity. But, we are not going to win by resisting without a clear purpose and a plan.”

A quote from Zuckerberg near the bottom of the page also states, “Progress does not move in a straight line.” The PAC reportedly committed to “convincing the American people to convince Mark Zuckerberg to consider a Presidential run in 2020, or at least join the conversation.” It even goes on to compare Zuckerberg to President Trump, describing him as “a wealthy, anti-establishment outsider unbeholden to special interests.”

The group states that regardless of how Zuckerberg may currently be viewed, “we believe that he represents a robust voice that would significantly augment the Democratic primary process, in addition to being a viable opponent to Donald Trump in 2020.”

Perhaps the most telling evidence that Zuckerberg is likely to run for office is his recent cross-country trip where he vowed to visit all 50 states in the US. In each state, Zuckerberg paid visits to locals and posed in photo ops blatantly designed to make Zuckerberg look like a “normal down to earth guy.” All that was missing was the quintessential photo of him kissing a baby on the forehead. In Wisconsin, Zuckerberg posed atop a red tractor, pretending to farm the land. 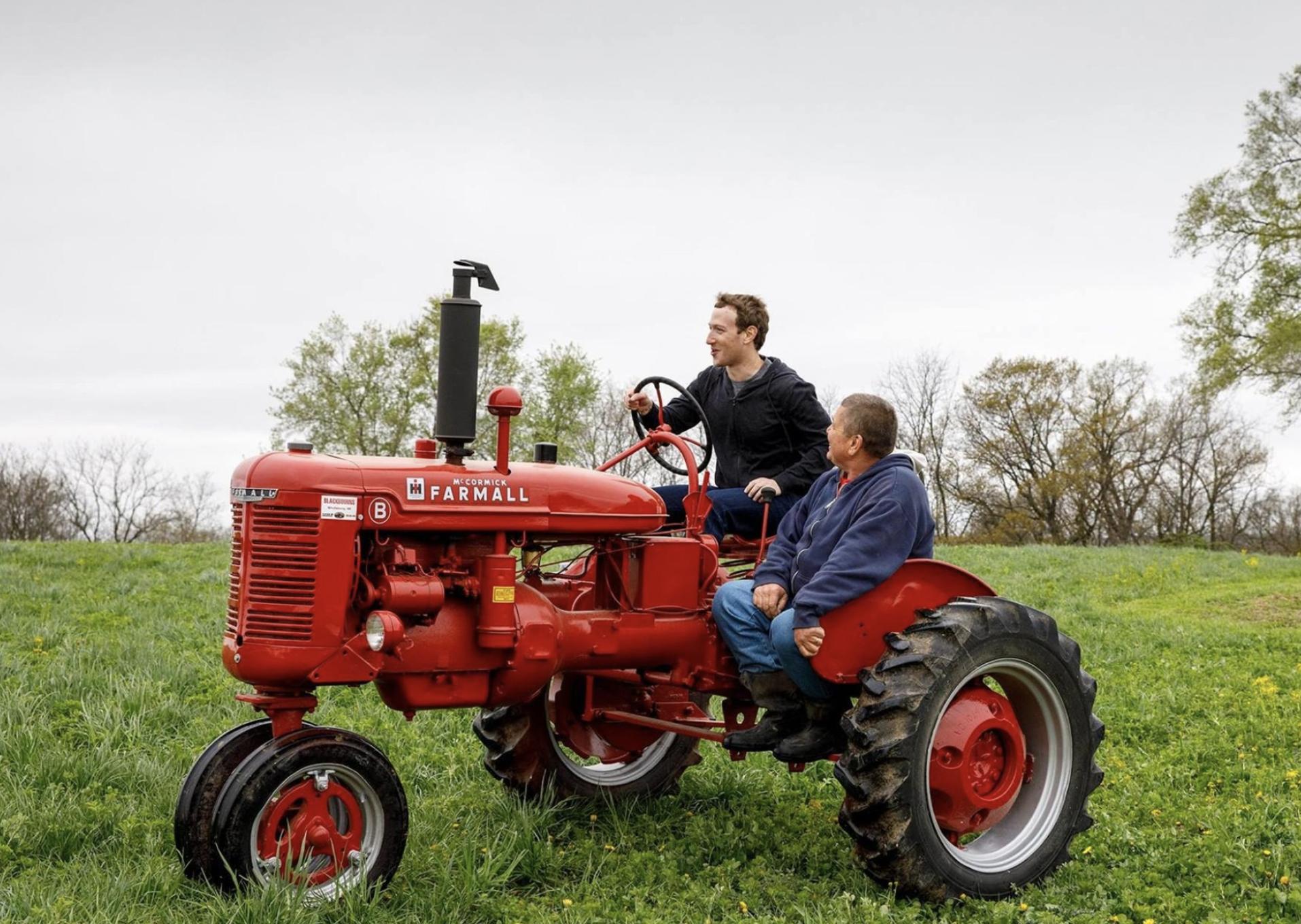 Zuckerberg also made visits to Charleston, S.C. where he attended the  Emanuel African Methodist Episcopal Church, 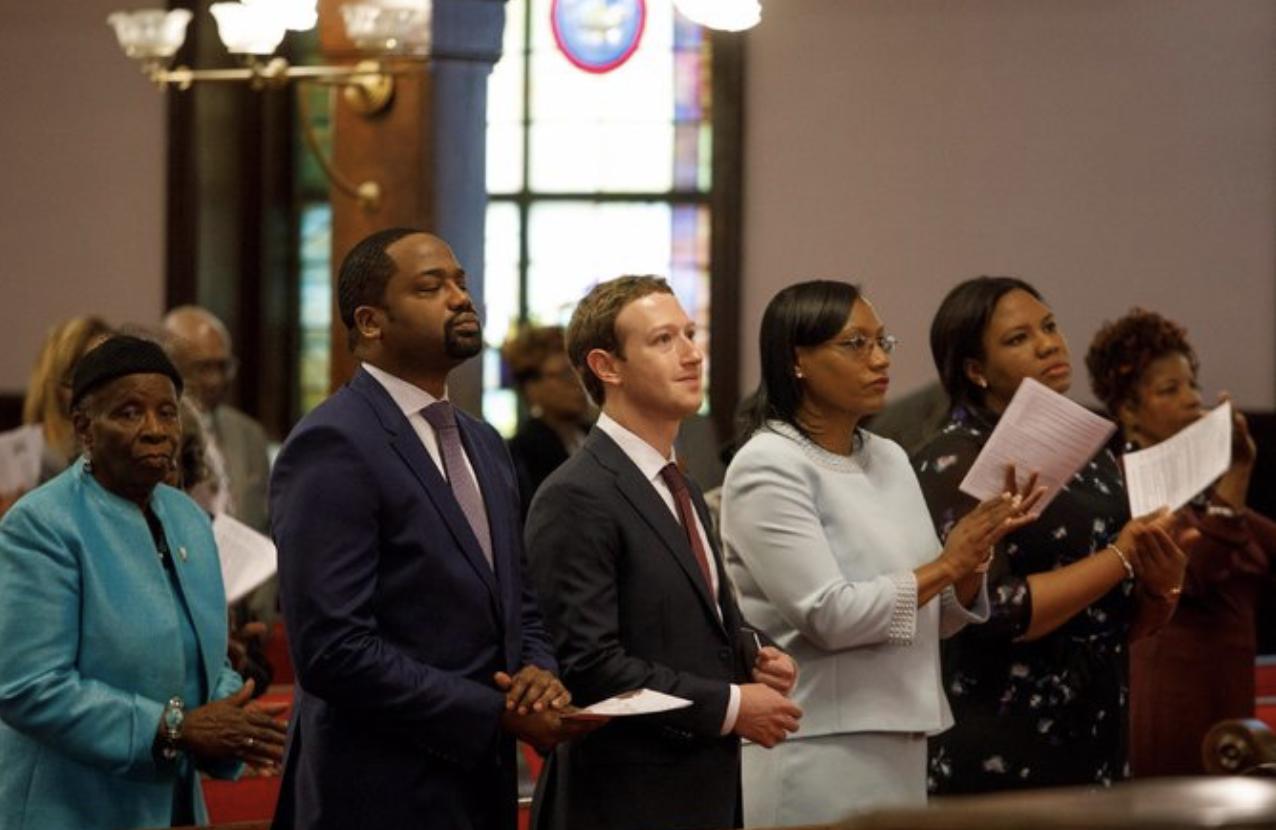 Zuckerberg has visited a whole host of other businesses and community groups during his travels, reportedly keeping his movements under wraps and only giving business owners a few moments notice before appearing in order to avoid being mobbed by fans.

The secrecy surrounding Zuckerberg’s arrival is allegedly due to the public reaction that the CEO receives when his location is discovered. When it was leaked that he would be visiting the Kusanya Cafe in Chicago, a barista said that she had to find 100 extra chairs to accommodate the people that arrived to catch a glimpse of Zuckerberg.

A spokesperson for the Chan-Zuckerberg Initiative discussed Zuckerberg’s impromptu visits, saying the purpose of “these visits is to have the most honest and candid interactions and discussions as possible, without the additional attention that’s likely to come as a result of word getting out ahead of time.” Despite these supposedly “candid interactions,” those visited by Zuckerberg are reportedly warned by his team to keep details of his visits under lock and key.

Notably, Jimmy Dahman, a former presidential campaign field organizer for Hillary Clinton, appears to be working with Zuckerberg, contacting Dan Moore of Newton Falls, Ohio, about if he would be interested in hosting “a billionaire philanthropist from California” at his home. Moore agreed and five days later, Mark Zuckerberg arrived at Moore’s house and ate dinner with his family. Before leaving Zuckerberg reportedly told Moore, “If there are any news reporters that call you, just make sure you tell them I’m not running for president.”

Minnesota Public Radio’s Bob Collins discussed Zuckerberg’s denial, saying, “Most people who are running for president usually declare at this time of the campaign cycle that they’re not. And we dutifully report that they say they’re not, forcing you to choose between what they say and your lying eyes.”

Is all of this a marketing tactic from a billionaire CEO attempting to humanize himself in the eyes of his users, or is this Zuckerberg laying the ground for a future presidential campaign? It is currently unknown what the young billionaire will do, but as we draw closer to the next presidential election, it seems we’re sure to hear more from the Facebook founder in time.