Google has refused to disavow a series of violent statements made by its former employee, Tim Chevalier, while he was still at the company. The search giant also will not say if Chevalier’s comments constituted a breach of their employee code of conduct.

Chevalier, a former Site Reliability Engineer at Google, recently left the company in undisclosed circumstances. During his time at Google, he was the subject of numerous complaints by colleagues who were made to feel uncomfortable by his radical comments, which often included direct calls for political violence.

During his time at Google, Chevalier changed his Twitter name to “Punch all the Nazis,” a meme that has been pushed in the progressive media and is frequently used by the “Antifa” movement to justify violence against peaceful Trump supporters, who they accuse of supporting fascism.

In public Google Plus posts, Chevalier also repeated an argument in favour of political violence against alleged purveyors of “hate speech.” He expressed these views as recently as August 2017.

“It’s perfectly reasonable to expect a violent response to the expression of hate speech because hate speech is itself violence” quoted Chevalier. “There is literally only one reason an antifascist would be violent towards you: you are a fascist.”

Although Chevalier’s Twitter account is now protected, his previous posts indicate that he too makes no distinction between Nazis, Trump supporters and Republicans. He also attacked “white liberals.” 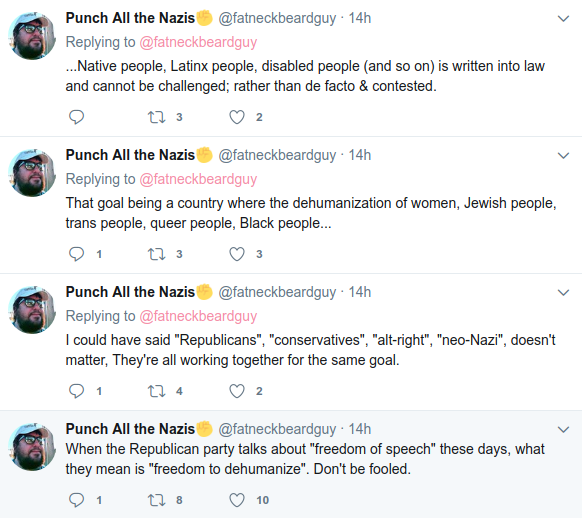 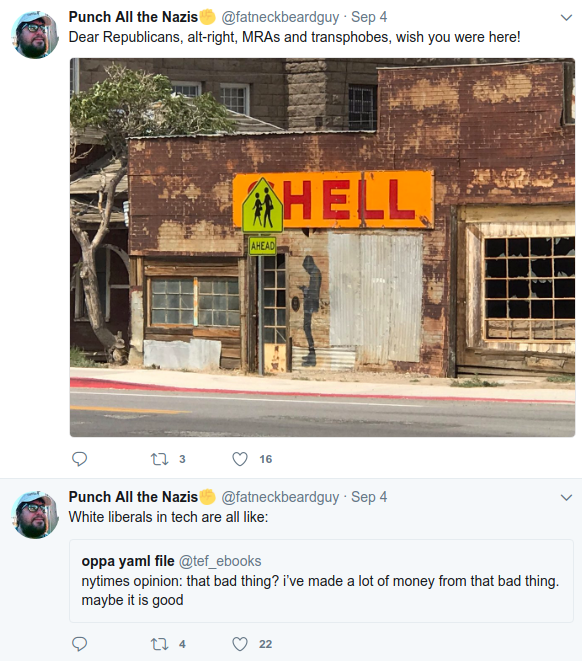 Chevalier has even defended an Antifa member who punched a female reporter from The Hill in the face during the Charlottesville incident. According to Chevalier, the reporter was merely “menaced.” He went on to say that taking photos of a person in a public place is an “aggressive act.” 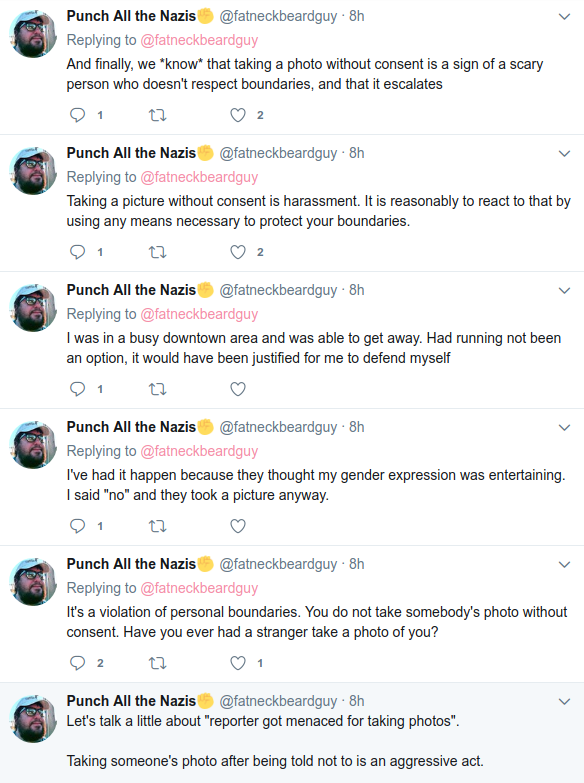 According to a current Google employee, who spoke to us anonymously, Chevalier was reportedly banned from the companies internal Google Plus forums for his incendiary posts. According to the employee, one post reportedly read, “I have said and will continue to say that voting for Trump does mean you are racist, sexist, and homophobic.” In another post, says the employee, Chevalier said “the choice to be a Republican is the choice to align yourself with a white supremacist, xenophobic regime. That wasn’t true in 2015, but it’s true now.”

Despite his ban from internal Google Plus forums, Google would not say whether his departure from the company was due to his advocacy of political violence when asked for comment by Breitbart News. When asked if Chevalier’s comments constituted a violation of their employee code of conduct, or if the company even considered them to be problematic, Google declined to comment.

Breitbart News also asked Google if they rejected all forms of political violence, including so-called “Antifa” violence. In addition, Google was asked if they believed Trump supporters and conservatives currently feel welcome at the company, and if not, if Google was taking any steps to redress the problem. On these, and the specific questions about Chevalier’s behaviour, Google also declined to comment.

With Google refusing to divulge the circumstances of Chevalier’s departure, or whether his comments violated their HR policies, it is also unknown if the company even imposed any consequences on him for his statements.

Over the past few months, conservatives in tech have been speaking out about a climate of hostility towards them in Silicon Valley, one that forces many of them to conceal their values and beliefs for fear of being blacklisted. Even CNN has devoted in-depth reporting to this issue, which was defined by former Google employees James Damore as a hostility to viewpoint diversity.

During his time at Google, employees say that Chevalier was at the forefront of efforts to purge conservatives from the industry. According to one current employee of the company, he was actively assisted in this by Google’s HR department.

“Tim has gotten conservatives in trouble by telling all of his followers to report a targeted individual to HR for nonexistent rule violations” says the former employee. “At least one person was fired this way. The company encourages workers to police each other through mob action. They put up posters in the hallways advertising the HR reporting hotline. Most Googlers are terrified of crossing Tim because the company will always take Tim’s side, no matter who is right.”

Discussing Google’s hiring of a conservative outreach manager in an attempt to connect more directly with their conservative users, Chevalier reportedly said, “Why is Google hiring somebody specifically to help a political party that has declared war on science, open access to information, immigrants, Muslims, and LGBTQ people (in other words: a party that directly and explicitly opposes Google’s values)? Also, how is it not discriminatory to list “Deep relationships in Republican politics” as a preferred qualification given that a person with these relationships is overwhelmingly likely to be white and cis?”

Chevalier also opposed any attempt by Google to work with Trump’s administration, as it did with the Obama administration. “Trying to “work behind the scenes” with the Trump regime means trying to work with white supremacists and make compromises with them. Is that what we want Google to do?”

A former Google employee familiar with Chevalier also confirmed that his behaviour was a major source of fear for conservatives at the company. In a comment to Breitbart, the former employee, who once held a senior position at the company, said:

Tim Chevalier has made the most violent threats (“punch all the Nazis”) against anyone who doesn’t agree with him. These statements have been brought to the attention of HR, HR has consistently made excuses for him and he continues to work here. His Twitter feed, which is now blocked to everyone but his friends, used to proudly claim membership in Antifa, the violent group that even the mayor of Berkeley called a street gang. His very presence makes Google an unsafe work environment, unless you happen to be a left-wing extremist like him.

Former Google engineer James Damore was fired from the company for making the case that gender disparities in STEM may have a biological basis, on the grounds that this made other employees feel uncomfortable. Chevalier, meanwhile, openly accused Republicans and Trump supporters, some of whom are fellow Google employees, of being white supremacists, fascists, and Nazis, while publicly tweeting that all “Nazis” should be punched. Yet Google refuses to publicly distance itself from those views.

This directly contradicts CEO Sundar Pichai’s public claim that he wants conservatives at Google to be able to “safely express their views in the workplace.”

In CNN’s in-depth report on viewpoint discrimination in Silicon Valley, the lead reporter began the article expressing the oddity of conservative tech workers feeling a need to conceal their identities before speaking to reporters.

“When doing on-camera interviews in the past, I’ve been asked to hide identities of sources and subjects. There were victims of harassment, sex workers worried about repercussions, hackers who’d committed a crime, people worried about their safety. But a technology worker afraid of publicly outing himself as “conservative” in Silicon Valley? That was a new one for me.”

With major companies refusing to condemn outright calls for political violence against conservatives and Trump supporters, this atmosphere of fear is likely to continue.