In his first video appearance since totally owning Newman in a must-watch Channel 4 studio discussion on feminism, free speech and social justice, Peterson expressed regret at having given any credence to the threat claims.

“Define threats,” Peterson says, when asked whether he believes if these “threats” ever actually existed.

Because there is no evidence that these “threats” were credible, Peterson now wishes he had never tacitly endorsed their existence when he asked his Twitter followers to “back off” from being rude to Newman.

His critics just exploited this by using it as proof that threats had indeed been made.

The Guardian plays it straight… https://t.co/z4G3xkJcby

The “threat” word was first deployed by Newman’s editor, Ben de Pear, shortly after it became clear that the interview had been a PR disaster both for Newman, Channel 4, and the left-wing causes they tend to champion.

1/2 Our @Channel4News onscreen journalists expect to be held to account for their journalism but the level of vicious misogynistic abuse, nastiness, and threat to @cathynewman is an unacceptable response to a robust and engaging debate with @jordanbpeterson.

Such is the scale of threat we @Channel4News are having to get security specialists in to carry out an analysis. I will not hesitate to get the police involved if necessary. What a terrible indictment of the times we live in.

De Pear’s ‘harassed victim’ narrative was eagerly relayed not only by the left-wing media, such as the Guardian and the Independent  but also in such notionally conservative newspapers as The Mail On Sunday  which headed its story “Channel 4 News presenter Cathy Newman is rocked by death threats over a row with ‘anti-feminist'”.

Yet still no evidence has been produced that Newman was ever actually threatened. Nor, indeed, that the criticism she did get was any worse than media figures of either sex  routinely receive on social media when they speak out on contentious issues.

Indeed, according to an analysis by Hequal, “Cathy Newman’s feminist fans aimed 30 times more violent sexist abuse at Peterson & his supporters than vice-versa”.

It notes, for example, that the phrase “RIP Cathy Newman” – which the Mail On Sunday‘s reporter implied constituted a “death threat” – was simply a reference to the fact that she had been “killed” in the debate.

As for “rape” – Hequal found three uses of the word, again none in a context which could be considered remotely threatening because of their clearly metaphorical context. One user, for example, tweeted a commentary that “that shit was downright rape.”

The most violent tweets came from Newman’s feminist supporters and were directed at Peterson: 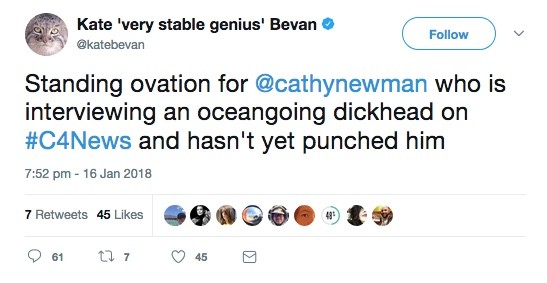 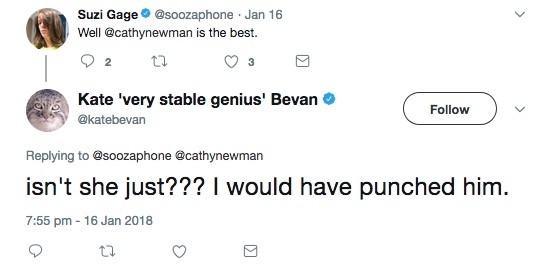 It’s of note that none of the tweets we saw used remotely misogynistic language as claimed by Newman/Channel 4 and the only sexism combined with violence was from journalist Kate Bevan and aimed at Peterson.

Adding up all the tweets, retweets and likes we find the following totals:

Non-sexist violence aimed at Newman or her supporters: 2

Sexist violence aimed at Newman or her supporters: 0

Non-sexist violence aimed at Peterson or his supporters: 8

Sexist violence aimed at Peterson or his supporters: 55

You can understand Peterson’s exasperation here. What should by rights have been his finest hour to date in his battle to uphold civilizational values against assault from the Neo-Marxist SJWs has been turned almost to ashes by the left’s dishonesty – and the MSM’s extraordinary willingness (et tu Mail on Sunday?) to buy into that spin.

But there are two reasons why I think it’s going to be all OK really.

The first is that thanks to the intellectual clarity of thinkers like Jordan Peterson – and Camille Paglia and Vox Day – we understand much better how the SJWs roll. To defeat your enemy you must first understand him. Once you realise that SJW tactics are straight out of the Alinskyite playbook, it becomes much easier to work your Defence Against The Dark Arts magic.

Look at the intellectual flabbiness and logical contortions of the articles portraying Newman as a bullied victim: say, this white-knighting effort by James Kirkup – or the aforementioned drivel from the Guardian, the Independent, the Mail on Sunday, HuffPo and so on.

Now compare it with the rigour of pieces like this essay from Douglas Murray in the Spectator; or this superb analysis by Ash Sharp, which sees in the antics of the Neo-Marxists shades of the warped thinking that informed the violence of the Baader-Meinhof gang; or this inspired tweet thread by Call of Bants (well worth reading in full).

The disparity is so obvious that you feel almost sorry for the SJWs: ultimately they are going to lose this war because their arguments aren’t strong enough. Their warped, smoke-and-mirrors philosophy has no logical or factual foundation. In the war between critical thinking and critical theory, critical thinking is always going to win… eventually.

And if you need evidence that this isn’t just wishful thinking, I urge you to read Douglas Murray’s moving and uplifting Spectator account of Peterson’s rapturous reception on his recent British tour. The post-snowflake generation have had enough of safe spaces and intersectionalism:

From his teaching, speeches, writing and interviews, it is clear that Peterson has made one of the most unpopular but vital realisations of our time: that we are creating a generation of men who (especially if they don’t belong to any ‘minority’ group) are without hope, foundation or purpose. Everything in the culture insists that they are terrible: proto–rapists when they are not rapists; proto-racists when they are not racists; condemned for their ‘privilege’ even when they are failures and their every success dismissed as undeserved.

This is destined to produce societal resentment and disengagement on a generational scale. Female politicians, among others, scoff, and most men run scared or duck. Peterson is one of the very few to take this problem seriously and to help young people to navigate towards lives of meaning and purpose. On Sunday night, one young woman asked what advice Peterson would give to a student like her. He told her to ignore those professors who aimed to wither the souls of their students. Instead he urged her to use her student years to cultivate the greatest possible friendships. Many of these friendships would be with people who — as Peterson put it — were dead; people whose feet the deconstructionists and resentment-cultivators of modern academia were not worthy of touching. 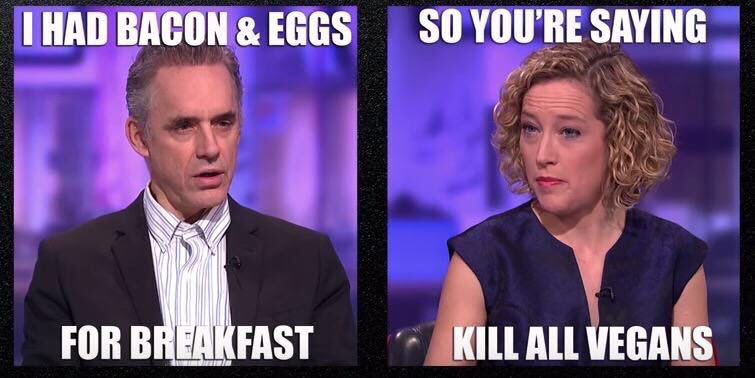 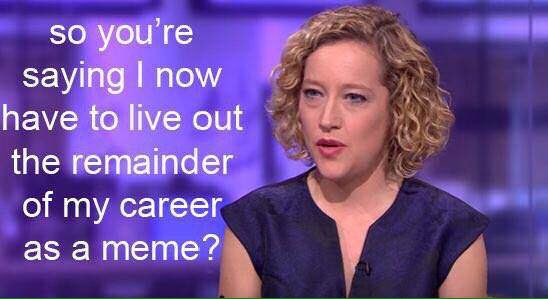 …aka The Left Can’t Meme.