NewsGuard, the browser plug-in that purports to separate real news from fake news and which, unlike most plug-ins, is included in Microsoft’s mobile Edge browser by default only requiring user activation, rated the exact same story about mainstream media journalist Lara Logan encouraging people to read news outlets from across the spectrum as fake on Breitbart News, but reliable on other websites.

During a podcast interview, Logan claimed the media was “mostly liberal.”

“The media everywhere is mostly liberal, not just the U.S.,” she proclaimed, adding, “Although the media has historically always been left-leaning, we’ve abandoned our pretense — or at least the effort — to be objective, today. … We’ve become political activists, and some could argue propagandists, and there’s some merit to that.”

“This is the problem that I have. There’s one Fox, and there’s many, many, many more organizations on the left. … The problem is the weight of all these organizations on one side of the political spectrum. When you turn on your computer, or you walk past the TV, or you see a newspaper headline in the grocery store If they’re all saying the same thing, the weight of that convinces you that it’s true,” Logan explained. “You don’t question it, because everyone is saying it. Unless you seek out Breitbart on your computer, you’re probably not even going to know what the other side is saying.”

Breitbart News, which covered Logan’s comments on Monday, had its story given a red warning by NewsGuard, which claimed it “fails to meet several basic standards of credibility and transparency.”

NewsGuard also claimed Breitbart News fails to present “information responsibly,” and does not handle “the difference between news and opinion responsibly.”

The Daily Mail, the New York Post, the Washington Times, Mediaite, Newsmax, the Daily Wire, Real Clear Politics, Townhall, NewsBusters, and Heavy were all given green ratings for their stories on the exact same comments.

a screenshot of Google searches on Logan’s remarks shows the contract in NewsGuard’s ratings: 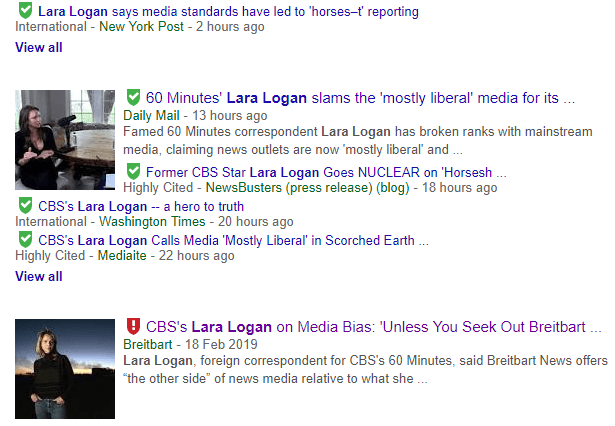 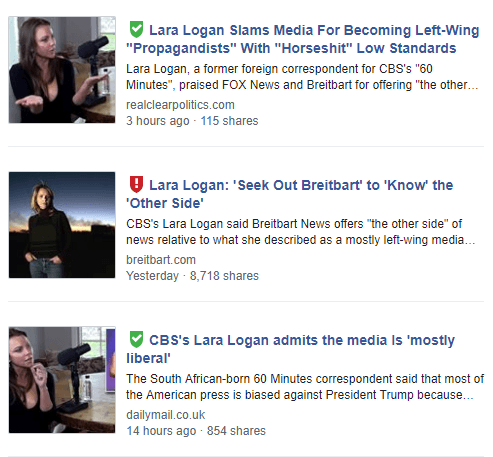 Breitbart News is not the only news outlet on NewsGuard’s media blacklist, which also includes WikiLeaks, the Drudge Report, and many others.

BuzzFeed, CNN, the New York Times, NPR, and Reuters are all rated as trustworthy by NewsGuard, despite them having a history of publishing fake, or misleading news.

NewsGuard’s advisory board is mostly made up of alumni from the presidential administrations of George W. Bush, Bill Clinton, and Barack Obama, and many of the members have previously spread inaccurate information, promoted conspiracy theories, and engaged in unethical journalism.