According to Drew Harwell, a reporter covering artificial intelligence and algorithms for the Washington Post, Fox News, Breitbart News, and the personal page of President Trump dominated the mainstream media throughout the news cycle during former Special Counsel Robert Mueller’s testimony before Congress. Harwell posted his findings in a number of tweets which showed the rankings of social media engagement during the hearing.

Remarkable fact from today, first noted by @DavidUberti: Trump got more Facebook comments, shares and reactions during Mueller day than any major news or politics site, except Breitbart and Fox News. (One was for this $34 "Pencil-Neck Adam Schiff" t-shirt.) pic.twitter.com/QgWqZPJY5g

The ranking image posted by Harwell lists Fox News as having the most interactions with 460,001 while Breitbart News came second with 336,023 interactions, beating the President’s tweet interactions of 217,051. All three significantly beat CNN, the highest-ranked mainstream media page with 199,676 interactions. 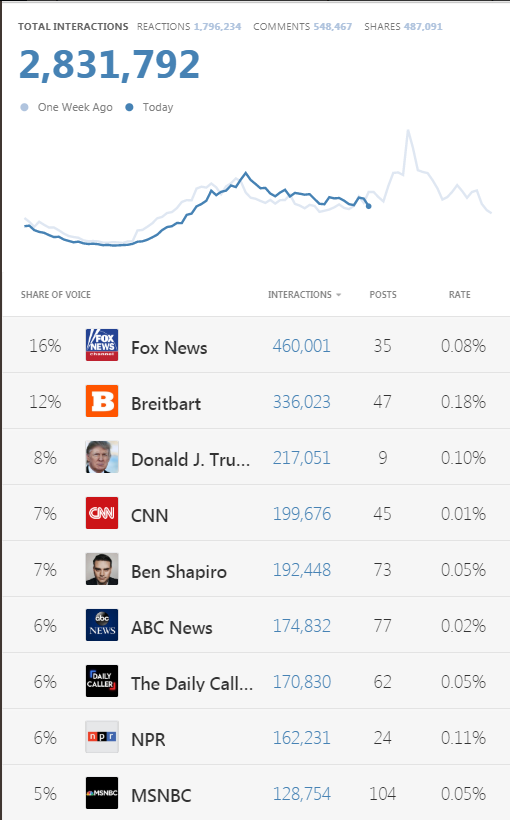 Harwell further notes that the President’s White House summit on social media helped to boost conservative figures who had previously seen their content removed, suppressed, or otherwise censored across social media. Harwell writes in his article:

After right-wing influencers and online provocateurs flocked to the White House earlier this month for a summit on how they’d been suppressed across social media, a remarkable thing happened: Their social media audiences soared.

President Trump and his allies spent the summit criticizing the tech giants for supposedly silencing conservative voices through “tremendous dishonesty, bias, discrimination and suppression,” as Trump announced in a tweet.

But the bemoaning of social media persecution proved to be an incredible marketing opportunity, allowing many to attract new fans and followers at a rate far faster than they had before the summit. In the nearly two weeks since the summit, 15 of the event’s invitees have seen their Twitter audiences grow by a combined 197,000 followers — a 75 percent jump over the number of followers they’d gained in the same time span before the event, according to a Washington Post analysis of data from the social media tracking site Social Blade.

From the Western Journal:

After removing the 15 publishers with the least traffic from Facebook, the trend becomes even more clear.

Of the remaining 35 news sources, the 12 most liberal sites averaged a boost of 0.21 percent — in other words, they don’t appear to have been affected in any meaningful way.

The 11 sites in the middle — which ranged from “left-center” to “least biased” on the MBFC News scale — saw a significant increase in Facebook traffic of 12.81 percent.

The 12 most conservatives sites lost an average of 27.06 percent of their traffic from Facebook.

Fox News was the only conservative site that saw significant growth in this calculation. If Fox were removed from the group of 12 conservative sites shown above, the average drop would grow to 32.4 percent among the remaining 11.

Executive editor of the Western Journal, George Upper, said in a comment to Breitbart News: “Facebook’s Campbell Brown has said that Facebook now has a ‘point of view’ when it comes to news. They are, in other words, making editorial decisions rather than allowing users to choose what posts get the most traction through likes, shares, and other interactions. Facebook is literally saying to users that they don’t care what sites or people or news outlets a user has liked on Facebook — they will determine what news users get to see. Those seem like the words and deeds of a publisher to me — and not only that, but a publisher with an agenda.”