Twitter is allowing its users to coordinate criminal behavior on the platform, with dozens of tweets identifying looting targets still on the platform despite the fact that the site was notified by concerned citizens. The company has however changed the description of its official account to “#BlackLivesMatter.”

A Twitter search for “Santana Row,” which is the name of a shopping district in San Jose, California, reveals dozens of Twitter users encouraging their followers to target and loot the district. Many of the tweets have been on the platform for days.

“let’s riot and raid Santana Row lol,” said one tweet, which was shared over 100 times.

“Next looting stop; SANTANA ROW IN SAN JOSE,” said another.

“Santana Row hasnt even issued a statement regarding everything going on when they are very active on social media. They deserve to get looted.” 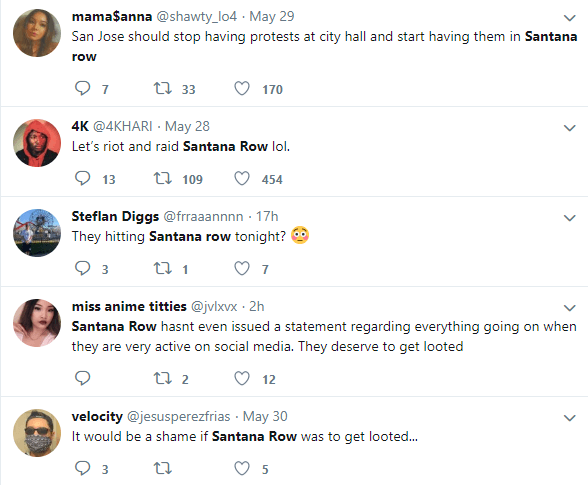 Twitter was alerted of these tweets by Breitbart News more than 20 hours ago, and has taken no action.

In a comment a Twitter spokeswoman said “We’re taking proactive action on any coordinated attempts to disrupt the public conversation around this issue.” The spokeswoman did not describe the tweets as criminal.

“@TwitterTogether,” another official company account dedicated to “diversity” said: “Racism does not adhere to social distancing. Amid the already growing fear and uncertainty around the pandemic, this week has again brought attention to something perhaps more pervasive: the long-standing racism and injustices faced by Black and Brown people on a daily basis.”

Racism does not adhere to social distancing.

Amid the already growing fear and uncertainty around the pandemic, this week has again brought attention to something perhaps more pervasive: the long-standing racism and injustices faced by Black and Brown people on a daily basis. pic.twitter.com/8zKPlDnacY

The account retweeted a picture bearing the slogan #BlackLivesMatter.

The criminal riots and looting being coordinated through Twitter have already claimed black lives, including that of Dave Patrick Underwood, a 53-year old federal officer who was shot and killed in Oakland, California.