To show support for the Black Lives Matters movement, social media users began sharing images of black squares across the #BlackLivesMatter and #BLM hashtags on multiple platforms, in many cases preventing information about protests and organizational donations from being seen.

The Verge reports that recently workers in the music industry organized “Blackout Tuesday” in an attempt to have people show solidarity with the Black Lives Matter cause. The idea was to post a photo of a black square to social media profiles, but now the #BlackLivesMatter and #BLM hashtags which were being used to share photos and videos of incidents, information about protests, and organize donations have now been inundated with photos of black squares preventing information from being readily available.

Many involved in the movement quickly began to see the issues with the posting of the black squares, singer Kehlani and rapper Chuck Inglish called out the problem retweeting videos of an  Instagram feed which appeared to be nearly entirely blacked out. 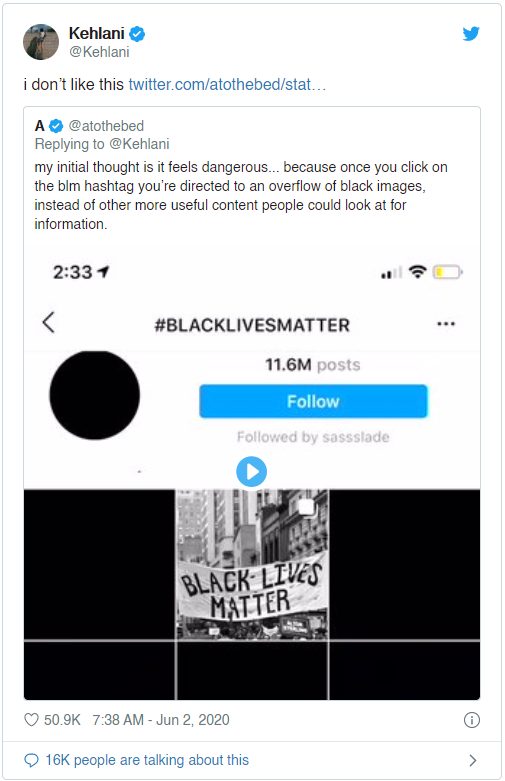 Posting black boxes on Instagram and hashtagging black lives matter is rendering the the hashtag usless. Remove the hashtag so actual BLM posts can be seen. #blackouttuesday #BlackLivesMatter

Spread this as much as you can! If you are participating in #BlackOutTuesday PLEASE don’t post that black photo with the ‘BLM’ hashtag as it is censoring important information.

The original poster of the video of the blacked-out Instagram feed wrote: “once you click on the blm hashtag you’re directed to an overflow of black images, instead of other more useful content people could look at for information.” Another user stated that the hashtag was “counter-productive … Amplify black voices WITHOUT silencing the movement.”

Others encouraged anyone posting the black square to remove the #BlackLivesMatter and #BLM hashtags from their posts. Twitter user Anthony James Williams wrote: “Stop posting black squares under the #BlackLivesMatter hashtag on Instagram. It is intentionally and unintentionally hiding critical information we are using on the ground and online … Tell me how this helps Black folk. It doesn’t, and it in fact makes things a lot worse. Tell your friends and fam to stop.”

stop posting black squares under the #BlackLivesMatter hashtag on Instagram. it is intentionally and unintentionally hiding critical information we are using on the ground and online. pic.twitter.com/EIS44aDXXd

Posting to the hashtag #TheShowMustBePaused, Thomas and Agyemang asked members of the music industry to “take a beat for an honest reflective, and productive conversation about what actions we need to collectively take to support the black community.”

At their website TheShowMustBePaused.com the pair wrote: “The music industry is a multi-billion dollar industry. An industry that has profited predominately from Black Art. Our mission is to hold the industry at large, including major corporations + their partners who benefit from the efforts, struggles and success of Black people accountable.”

Breitbart News has reported extensively on the protests and riots across the country following the recent death of George Floyd, follow the Live Wire here.