Over the past 24 hours, Facebook and Twitter have labeled posts by President Trump at least 25 times for various reasons. In one case, Facebook labeled the President’s post of his Veterans Day proclamation with the note “Joe Biden is the projected winner of the 2020 US Presidential Election.”

Over the past 24 hours, President Trump saw his posts labeled or censored 20 times on Facebook and five times on Twitter, nearly all of the labels questioned the President’s comments relating to the U.S. Presidential election and many stated that Joe Biden was the projected winner of the presidency.

One of the labeled posts on Facebook can be seen below: 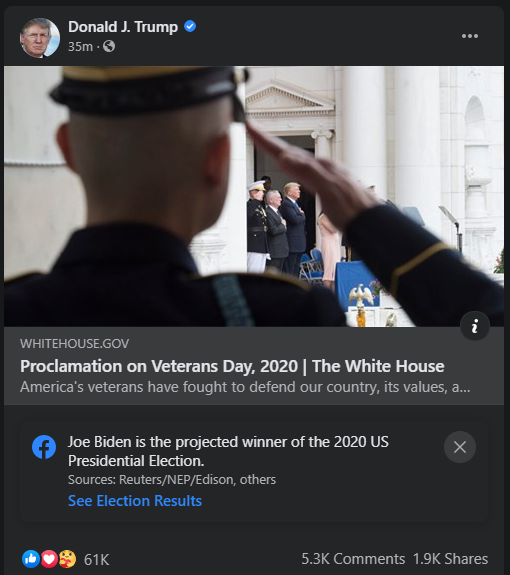 Facebook appeared to repeatedly inform those reading the President’s Facebook page that a number of publications have projected that Joe Biden will win the presidential election, often on posts made by the President that did not even relate to the election.

Twitter labeled five posts by the President in the last 24 hours despite previously being more heavy-handed than Facebook in its censorship. The labeled tweets can be seen below:

A guy named Al Schmidt, a Philadelphia Commissioner and so-called Republican (RINO), is being used big time by the Fake News Media to explain how honest things were with respect to the Election in Philadelphia. He refuses to look at a mountain of corruption & dishonesty. We win!

People will not accept this Rigged Election! https://t.co/XQAOIt5ZwU

I Was In Philadelphia Watching Fraud Happen. Here’s How It Went Down https://t.co/fRMw3ilbYG They shut out our Poll Watchers and Observers. Those hundreds of thousands of votes should not be allowed. Corrupt politics.

“I don’t care what state you’re in, this computer voting system is wide open to fraud and intervention.” @LouDobbs True, and wait until you see what’s coming!

Breitbart News previously reported that Twitter was adding fact check click-through windows to some of the President’s tweets, preventing users from seeing them on their timelines and disabling replies to the tweets.

Recently, President Trump expressed his feelings about a Supreme Court ruling on voting in Pennsylvania in a tweet, which Twitter marked as “misleading.” Trump stated: “The Supreme Court decision on voting in Pennsylvania is a VERY dangerous one. It will allow rampant and unchecked cheating and will undermine our entire systems of laws. It will also induce violence in the streets. Something must be done!”

Read more about social media censorship of the President at Breitbart News here.