Federal Bureau of Investigation (FBI) agents are reportedly asking whether Anthony Quinn Warner, a person of interest in the Nashville explosion, was paranoid about 5G technology.

A source close to the investigation said, “Agents are probing if Warner, 63, feared that 5G technology was being used to spy on Americans,” the New York Post reported Sunday.

As of Sunday morning, no arrests have been made and no motive revealed in the explosion that occurred in downtown Nashville on Christmas morning.

Warner’s possible fears of 5G technology was also confirmed by a Nashville real estate agent who told NBC he’d called the FBI Saturday after seeing the person of interest’s name in the news. The real estate agent, Steve Fridrich, reached out to investigators after realizing he’s hired a “Tony Warner” to do IT work for him for the past several years — and as recently as this month.

The FBI agent he spoke to asked if Warner was paranoid about 5G technology, Fridrich told NBC. Fridrich said he told the agents that Warner never mentioned being afraid of 5G.

“Nice guy. You know, he was a techie guy — don’t mean anything negative about that,” Fridrich commented, adding Warner would “do this thing and leave. He didn’t bother anybody. He did his thing and left.”

…#exclusive @CBSNews has learned the name of a person of interest tied to the explosion that rocked #Nashville on #Christmas Day. Multiple sources tell us that Anthony Quinn Warner, a Nashville area resident, had a similar make and model RV.

Officials said the explosion appeared to be both intentional and meant to limit casualties, Breitbart News reported:

According to authorities, gunfire was heard ahead of the bomb blast outside an AT&T building in Nashville’s downtown area between First and Second Avenues. The shots fired call came in about an hour before the blast. Once police arrived on the scene, officers heard a loudspeaker blasting a message from a van warning, “If you can hear this, evacuate now.”

Following the incident, six Nashville police officers were recognized for evacuating people from the area and saving lives just before the explosion. 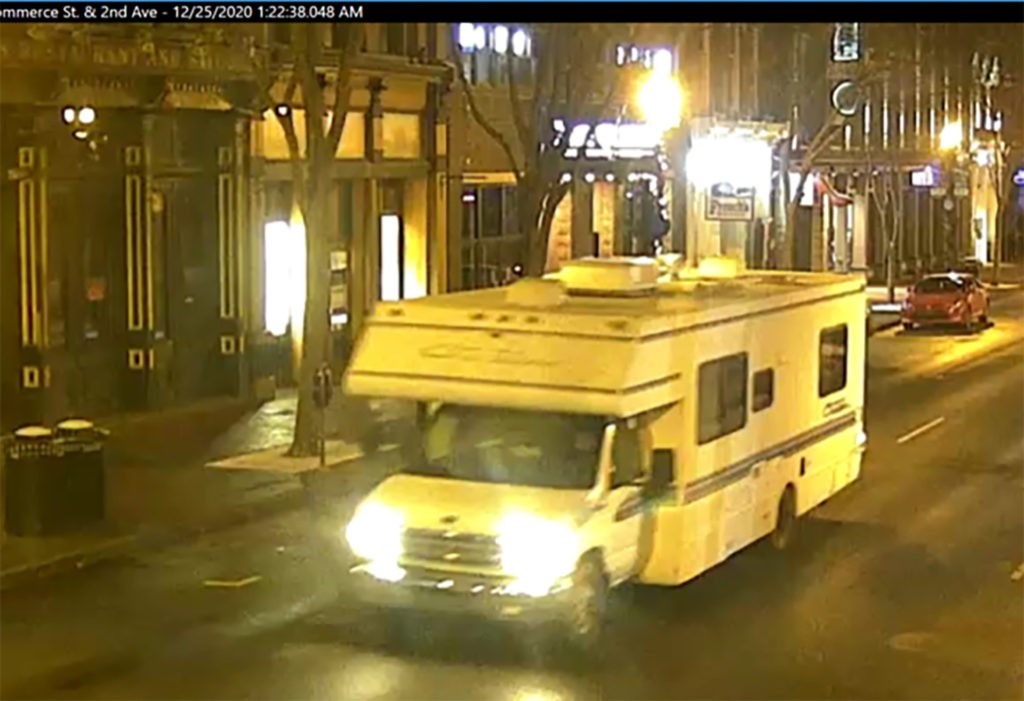 In this handout image provided by the Metro Nashville Police Department, a screengrab of surveillance footage shows the recreational vehicle suspected of being used in the Christmas day bombing on December 25, 2020 in Nashville, Tennessee. A Hazardous Devices Unit was en route to check on a recreational vehicle which then exploded, extensively damaging some nearby buildings. According to reports, the police believe the explosion to be intentional, with at least 3 injured and human remains found in the vicinity of the explosion. (Metro Nashville Police Department via Getty Images)