Washington DC has been awash in lobbyist money for well over a century, but the biggest players shift with the times. Today, the biggest of the big league lobbying comes from Big Tech, with companies like Facebook and Google pouring tens of millions of dollars into think tanks, advocacy organizations, and academic institutions to stall the backlash against their industry.

The result of this spending is that many writers and pundits that claim to offer impartial commentary on the tech industry are in fact on the take from one (or all) of the Big Tech companies.

A new browser extension called Big Tech Funding released by the social conservative nonprofit American Principles Project helps identify these tech shills, by adding notes next to the names of Twitter users that are linked to Big Tech-funded organizations.

For example, Mike Masnick, editor of the supposedly neutral tech blog Techdirt, gets the following note: 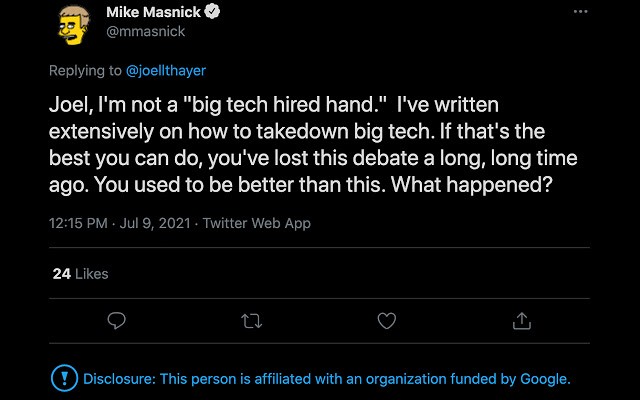 Here’s a similar note for Shoshana Weissmann, who advocates against tech regulation for the Google-funded R Street Institute. 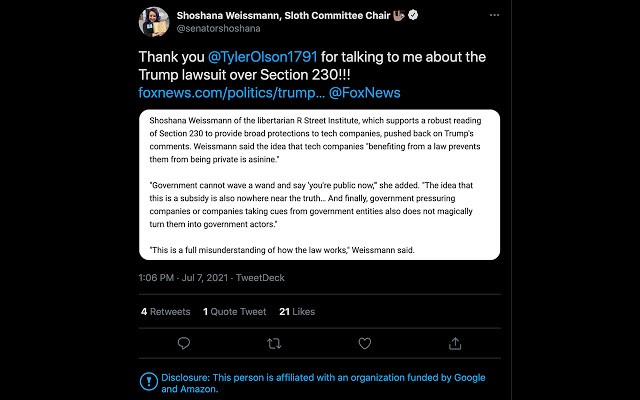 As Breitbart News has previously reported, much of this money goes to establishment conservative institutions, as Big Tech tries to control the narrative on both sides of the aisle.

The executive in charge of Google’s U.S. lobbying efforts in 2018, Adam Kovacevich, admitted as much in leaked audio from that same year. The goal of Google spending money on conservatives, Kovacevich told outraged liberal employees, was to “steer” the conservative movement.

Update — This article has been updated to reflect the fact that The Heritage Foundation has pledged not to accept Big Tech money in the future.