James Madison University (JMU) in Harrisonburg, Virginia, is training its student employees that people who are white, male, straight, or cisgender are “oppressors” that engage in the “systematic subjugation” of other social groups. The training instructs the students that Christians are also considered an “oppressor,” with all other religions considered a “target.”

JMU staff and student employees in charge of facilitating orientation for first-year students this fall underwent mandatory training in which they learned about so-called social injustice and inclusion, according to documents obtained by Fox News. 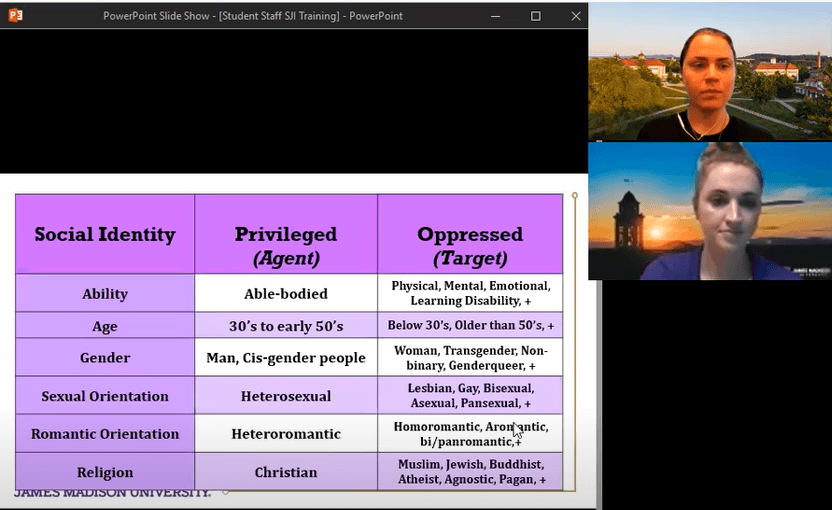 Moreover, the presentation also defined privilege as the “unearned social power accorded by the formal and informal institutions of society to ALL members of a dominant group at the expense of targeted groups.”

In the video, the JMU training materials listed what they called the “privileged (agent)” and the “oppressed (target).”

The so-called “privileged” are considered people who are”

Meanwhile, the so-called “oppressed” were labeled as:

The video went on to list “conditions of oppression,” which include the “oppressor” having “the power to define reality for themselves and others,” as the “target” groups “take in and internalize the negative messages about them and end up cooperating with the oppressors (thinking and acting like them).”

Another condition of oppression is, according to the JMU presentation, “members of both the oppressor and target groups are socialized to play their roles as normal and correct.”

After the training video, student employees reportedly received an email instructing them to “not share these materials with others.”